The crash of a B-52 aircraft, armed with nuclear warheads, in north-west Greenland back in 1968 has left a lasting legacy, according to those involved in the clear-up and those who live in the region now.

There are claims of long-term damage to the environment and to the health of individuals, allegations disputed by the governments involved.

Following the fire aboard the aircraft, the high explosives surrounding the nuclear weapons exploded but without setting off the actual nuclear devices, which were not armed.

Mystery of lost US nuclear bomb

Three of the four bombs being carried by the plane smashed on to the ice and broke into tiny fragments.

Radioactive material was widely dispersed across the ice and was also thrust into the sky in a plume of smoke, declassified documents show.

Danish workers rushed to the scene of the crash, near Thule, and were heavily involved in clearing up the wreckage in the subsequent weeks and months as part of an enormous US military operation.

However, some of those workers believe not enough thought was given to their safety, given the presence of radioactive material from the bombs on board the plane.

"I was never given any protective equipment; I just went out in whatever you normally wore at work," recalls Jeffrey Carswell.

One of the weapons melted through the ice and sank into the bay below where it was abandoned, after a submarine search failed to locate it. 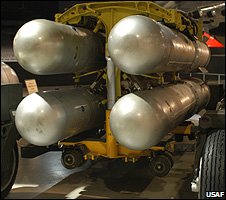 File photo of a Mark 28 thermonuclear bomb (Image: USAF)
Four nuclear bombs were aboard the B-52 when it crashed

US government scientists conducted numerous studies to try to work out what would happen and eventually decided that if they could not recover the remaining parts of the bomb, then no-one else could.

They also decided that the environmental impact would be limited because the material had been dispersed in such a large body of water.

"The bottom of the ocean is not a bad place in terms of environmental effects," William H Chambers, formerly of Los Alamos Nuclear Laboratory, told BBC News.

Before the base was established in 1953, the land was home to the local Greenlanders, who were then relocated 60 miles further north up the coast to the village of Qannaq.

In Qannaq, hunting is still an integral part of life and livelihood; some of the hunters believe they have seen the effects of the 1968 crash's radioactive material. 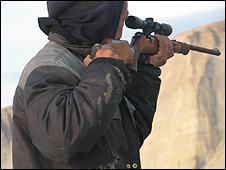 "There were two times when I hunted, when the seal's insides were dried out. Something must have happened to them," Ussaaqqak Qujaukitsoq told me on the waterfront of the village.

"If we think about the walruses and the other birds that have eating grounds on the bottom of the ocean, we will see the impact of it."

Other villagers, who went to the crash, also complain of undiagnosed, unusual illnesses.

And the workers at the crash site, like Jeffrey Carswell, also believe they have paid a price.

"I was referred to a specialist and they discovered I had a particular condition that needed to be operated [on] straight away," Mr Carswell told me.

"My doctor said that my particular condition was caused by exposure to radiation and plutonium.

"As we found out when we started talking to colleagues, a lot of those of us who were there at the time had problems of various types, all sorts of shocking problems that is, for sure, linked to what happened at Thule."

Qannaq, Greenland (Image: BBC)
Local residents say that they have been left to live with the consequences

The workers have taken a case through Europe's courts, arguing that Denmark failed to abide by a European directive requiring their health be monitored.

To date, they have been unsuccessful.

"There are four petitioners included in this case," explains their lawyer Ian Anderson. 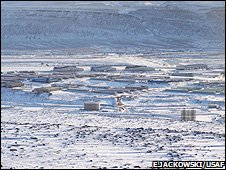 "Two of them have died of radiation illnesses and they are being represented by their next of kin. Two of them are seriously ill with radiation-related conditions.

"The case is quite simple: had they been medically monitored from the year 2000 when that directive came in to force, their conditions would have been detected at an earlier stage with a much better prognosis."

But the Danish government is adamant there is no hard evidence to suggest a long-term health impact.

"We have found no link between the crash and the illness of the Thule workers," says Kaare Ulbak, from the Danish National Institute of Radiation Protection.

"We have very good registers for cancer incidents and cancer mortality and we have made a very thorough investigation."

According to Dr Ulbak, between 0.5kg and 1kg of plutonium has been on the seabed, seeping into the marine environment over the years, but surveys show that this also poses no danger to humans in the region.

But former workers believe that the lack of proof of a link between the crash and their ill-health is precisely because they have not been monitored over time in a way that would allow such a link to be proved.

The head of the Association of Former Thule Workers, Jens Zieglersen, who also helped at the crash, remains unconvinced.

"I think it's a cover-up. We are getting older and the Danish authorities and the Danish government will wait and keep their mouths sealed for another 15, 20 years; then there's no-one left that remembers and who was a part of the accident back in the days of '68."

It is now 40 years since the crash of the B-52. But for those who were in Thule then and for those living in the region now, life and death is still defined by the events of that day.

http://news.bbc.co.uk/1/hi/sci/tech/7720466.stm
. is it a wise man, who knows that he is not wise
. it's good to have cynicism but not be cynical
. the more truth you live with, in your life, the stronger you are
. intelligence is merely an attitude to knowledge and learning