Kouchner is a moron.. 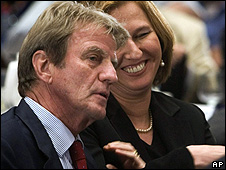 Some Israelis may have choked on their breakfast when a newspaper headline quoted France's foreign minister saying Israel might devour its arch foe, Iran.

Hebrew daily Haaretz splashed across its front page that Bernard Kouchner said Israel might "eat" the Islamic Republic before it got nuclear arms.

When Mr Kouchner was asked about the possibility of Tehran developing a nuclear weapon, the Hebrew and English editions of Haaretz newspaper quoted him saying:

"I honestly don't believe that it will give any immunity to Iran. First, because you [Israelis] will eat them before." 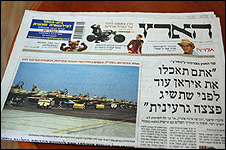 
He went on to say: "And this is the danger. Israel has always said it will not wait for the bomb to be ready. I think that [the Iranians] know. Everyone knows."

The comments were published on Sunday, as Mr Kouchner ended a two-day visit to the region, under the headline in Hebrew saying "You will eat Iran before it achieves an atomic bomb".

On Monday, the paper published a correction and apologised for the "misunderstanding", but it also said the transcription had been cleared with Mr Kouchner's office prior to publication.

The paper did not explain how the mistake had occurred, but dropping the "h" is widely seen as a feature of English spoken with a French accent.

Haaretz's current English online version of the story - with "hit" rather than "eat" - makes no mention of the earlier confusion.

It could be said any levity about the misquote belies the seriousness of the issue it relates to. The US, Israel and their western allies say they believe Iran is seeking nuclear weapons, an accusation Tehran strongly denies.

Israel, the region's sole if undeclared nuclear power, has raised the possibility it might launch a pre-emptive strike against Iran to prevent it from becoming nuclear-armed.

http://news.bbc.co.uk/1/hi/world/middle ... 658728.stm
. is it a wise man, who knows that he is not wise
. it's good to have cynicism but not be cynical
. the more truth you live with, in your life, the stronger you are
. intelligence is merely an attitude to knowledge and learning