In the shade of the trees where they have been picking olives all morning, in this wadi, south-east of Nablus, a Palestinian farmer, Jamal Otman Koarik, and two of his daughters share a lunch of home-baked bread, zatar, oil, courgettes and salad with three visitors. It's a bucolic scene that could have happened any time in the past century. But what makes it notable in 2008 is that the guests who have been helping Mr Koarik pick the olives are Israeli Jews: a rabbi, an anthropologist and a youth worker, Hellela Siew.

Born in Tel Aviv, Ms Siew served in the army, took a university degree, then a teacher's diploma. Thirty-six years ago, she took the tough decision to emigrate to London, telling her parents: "I won't come back until there's peace." Ms Siew, who is now 64, remains an Israeli citizen but now lives with her British husband in Hebden Bridge. She has kept to her word, except that each autumn she comes back to stay in her hometown with her relatives and spends each day of the two-month harvest season picking olives on Palestinian farmland in the West Bank.

And Ms Siew does that for a purpose. Up on the ridge above us, you can see the red roofs of Itamar, a notably hard-line Jewish settlement, and she is here to help protect the Palestinian farmers from the threat of settler violence which has so often scarred the olive harvests.

Last year, she was in a group in the South Hebron Hills confronted by settlers who fired shots from a pistol and an M16 assault rifle, despite the presence of the army and police. "Then one of the soldiers said, 'Look, one of them is coming down with a jug of water for you'. The settler emptied the jug over me. It was full of human shit."

Mr Koarik, the olive farmer, says he has no difficulty distinguishing between the settlers who fired on and burnt out his tractor during the harvest six years ago and the Jews who come to help him. "I welcome them here like they are my family," the 40-year-old says. Looking up at the settlement, Ms Siew tries to explain, as a lifelong opponent of the occupation, why she comes each year. "When there was the big demonstration against the Iraq war in England people carried banners saying 'Not in my name'. I'm trying to do something against what is being done in my name."

Ms Siew was brought here by the Israeli group Rabbis for Human Rights, led by Rabbi Arik Ascherman who has led a never-ending campaign to persuade the army and police to enforce the Palestinian olive growers' right to farm their land despite the settlers' attempts to stop them. RHR has made a special effort this year to maximise its volunteer numbers because of the growing incidence of settler violence against Palestinians in the past few months.

Rabbi Ascherman says that apart from one notably ugly and violent confrontation with aggressive settlers in Hebron last week, the harvest has been relatively quiet. But it has only just begun. And while the army insists that it will "strive" to ensure as normal a harvest as possible, Rabbi Ascherman is considering returning to the Supreme Court because of restrictions he says the military is still imposing on the farmers even in areas opened up under a 2006 order made by the Court.

Asked why he and his volunteers make this often risky mission each year, the US-born rabbi says "if we really believe" the Biblical text that all human beings are made in God's image, "we have got to put our money where our mouth is and be here in an active way to defend human rights". And he also cites the "dialogue of the olive groves" in which Israelis and Palestinians who "have to live and die here together" have "no choice but to communicate" if they also work together. "I think this is not only the just and right and Jewish thing to do, but it's the self-interested thing to do. We are going to survive."

link
. is it a wise man, who knows that he is not wise
. it's good to have cynicism but not be cynical
. the more truth you live with, in your life, the stronger you are
. intelligence is merely an attitude to knowledge and learning 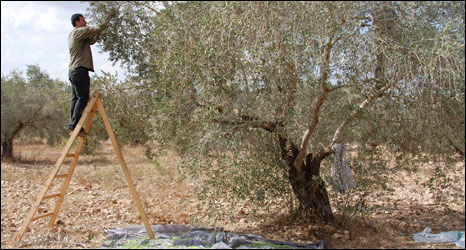 Last week, though, it was he who was threatened with arrest, by the Israeli army.

It had happened while the 24-year-old Ramiz was taking time off to help his family with the olive harvest.

He had been stopped by Israeli soldiers, as he advanced, holding a stick in each hand, on a group of settlers.

Ramiz said he was tipped over the edge when he had heard the settlers yelling that the Prophet Muhammad was a pig. 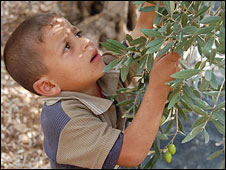 The incident happened, just after Ramiz and his family had begun harvesting olives from their grove close to the Palestinian village of Kedum, and the Jewish settlement of Qedumim, in the West Bank.

I spoke to him on day six of the harvest, as he straddled a rickety, triangular ladder, to reach the highest branches.

"We are used to the stones, and to the fighting," he told me. "But the insults were too much."

Ramiz says that his family has grown olives on this land for hundreds of years.

The area has, since the Israeli occupation of the West Bank in 1967, also become home to Jewish settlements.

"We have to leave at four in the afternoon, because the army won't allow us to stay. And then the settlers come in.

"They steal our plastic sheets [used to catch the olives], our olives, our ladders."

He says that the Israeli army and border police almost never intervene; and if they do, it is often to make life more difficult for the local Palestinians.

It takes Ramiz and his family around two hours to harvest the olives, from each of their 100 trees. 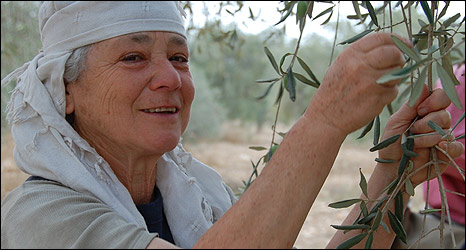 We spoke against the gentle thrumming of the fruit hitting the tarpaulin around the trunk, like the pattering of fat rain drops against a window.

The harvesters were making slightly quicker progress on this day: helping them was a group of Israelis and foreigners, organised by the group Rabbis for Human Rights.

Among them was 64 year-old Hellela Siew.

She has helped Palestinians with the olive harvest for the past seven years.

And it is a journey she makes, every year, not from Tel Aviv, or Jerusalem - but from Hebden Bridge, a small, bucolic community in the north of England.

Hellela was born in Tel Aviv; she left Israel in 1972.

"I had finished university. I was very frustrated. I told my parents: I'm not coming back until there's peace."

Hellela paused, and smiled, sadly. "But there is no peace, and I'm not really a hostage."

She may be three times as old as some of the young Israeli volunteers, but the olives fell from her branches far more quickly, with her practised technique.

"I do get scared from the settlers," she said.

She said settlers have thrown stones and excrement at her.

"Things are worse now. At least when I left in 1972 there was hope. I wouldn't say such a thing nowadays. There's no chance now." 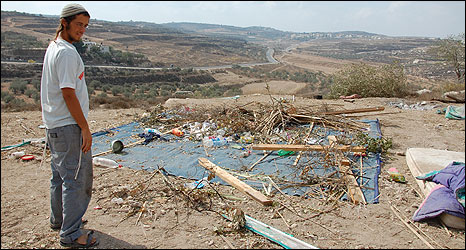 The reason for the change, Palestinians and Israeli activists agree, is the generational shift among the settlers - the emergence of what has become known as the "hilltop youth".

We tramped up the hillside to the ridge that overlooks Ramiz Barham's olive grove.

There was the latest "outpost", or attempt to set up a new Jewish encampment, in contravention of Israeli law (let alone international law, which regards even officially-sanctioned Israeli settlements as illegal).

As we drew closer, I recognised one of the three.

Yedidye Slomin is a teenager whom I first met in February, on the other side of the valley.

He had helped set up an outpost called "Shvut Ami". When I went back to see him in April, the young settlers of Shvut Ami were being evacuated, by the Israeli border police, for the eleventh time.

You can see the film I made about it here

Where we were now standing was, Yedidye told me, "Shvut Ami Bet", or Shvut Ami number 2. 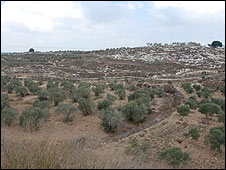 He, and a few other young men, had been here for the last four months.

Three weeks ago, the army came for the first time, to try to kick the settlers out.

Since then, he said, soldiers have returned five times, most recently just the day before.

Yedidye showed me what had been his cabin, and what was now just a few strips of shredded wood.

"We will not leave," he insisted. "The army can come, and we will repair, and each time we will be quicker."

Yedidye would not talk about the olive harvest, nor about any allegations that a minority of settlers vandalise and steal and fight.

But he did insist that this land, all this land, was the Land of Israel.

Within sight of "Shvut Ami Bet", Ramiz Barham, his family, and the Israeli volunteers, were painstakingly stripping the branches of their hard green fruit.

I had thought that olives were harvested by shaking the branches on to sheets below. Ramiz looked horrified.

"You mustn't shake the tree," he said. "It's far too sensitive."

http://news.bbc.co.uk/1/hi/world/middle ... 688768.stm
. is it a wise man, who knows that he is not wise
. it's good to have cynicism but not be cynical
. the more truth you live with, in your life, the stronger you are
. intelligence is merely an attitude to knowledge and learning