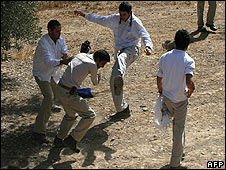 Palestinian leader Mahmoud Abbas has condemned violence by Israeli settlers against Palestinians harvesting their olives as a "dangerous escalation".

There have been several reports of attacks in recent days, a week into the yearly olive harvest.

But settlers have accused Palestinians of burning their own olive groves and then blaming them.

Mr Abbas criticised Israel for failing to stop the attacks, but the army says it is working to protect Palestinians.

Millions of olive trees across the West Bank provide a livelihood to many Palestinians.

"We condemn the attacks against our Palestinian people and the harassment by the settlers and army during the olive harvest in more than one place in the West Bank," said Mr Abbas, in comments published in Israeli newspapers on Monday.

He said he would fund the planting of a million trees, calling on Palestinians to green the West Bank with olive groves.

On Monday, the Palestinian-led International Solidarity Movement said more than 100 settlers had blocked roads near the West Bank town of Qalqilya and had been throwing stones.

They said four people, three internationals and one Israeli citizen, had been arrested "after being attacked by settlers" while helping Palestinian farmers pick olives.

In an incident filmed by the Associated Press on Saturday, a Palestinian photographer and a British woman were punched by settlers in the West Bank town of Hebron before the Israeli military broke up the scuffle. 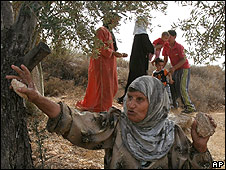 Palestinian woman holds stones during clashes with settlers near Nablus ( 19.10.08 )
This year's olive harvest is said to have seen a rise in clashes


The Israeli military criticised the Palestinians in the area for going out to harvest their olives without coordinating the timing with them.

Under measures which the Israeli military says are aimed at reducing clashes, Palestinians in some areas must harvest their olives according to a timetable agreed by Israeli and Palestinian authorities.

The Jerusalem Post on Saturday quoted an unnamed "top Israeli Defence Forces official" as saying this year's harvest was one of the most violent in recent years, with 20 clashes so far.

On Tuesday, Israel's defence minister lashed out at those he called "thugs" who interfere with the olive harvest.

"I condemn these thugs who interfere with the olive harvest which constitutes an important sector of the Palestinian economy," Ehud Barak told Israel's army radio.

The settlers' Yesha Council has said that while "a few very vocal, very visible and very disruptive Jews... allegedly carry out actions against the Arab olive groves", the number involved is "tiny" and the damage minor compared to "vandalism and theft against Jewish farms elsewhere".

The tensions come against a backdrop of a rise in violent incidents between Palestinians and settlers in the West Bank this year.

Israel has settled about 450,000 of its citizens in the West Bank and East Jerusalem since it occupied the areas in 1967.

Settlements, which are heavily guarded by the Israeli army, are considered illegal under international law, though Israel disputes this.

http://news.bbc.co.uk/1/hi/world/middle ... 679399.stm
. is it a wise man, who knows that he is not wise
. it's good to have cynicism but not be cynical
. the more truth you live with, in your life, the stronger you are
. intelligence is merely an attitude to knowledge and learning

one does have to point out that if they are "clashes" between the olive pickers and the settlers, it MUST be the settlers GOING to the palestinian areas to CREATE TROUBLE.

why would a palestinian go to pick olives near a zionist outpost, a) where there are no olives and b) knowing, AS EVERYONE DOES what these evil c*nts are like?


proof, right there, of zionist terrorism.


check this small vid out:
http://www.mediafire.com/?nojbaztymdj

see what the palestinians have to deal with.
. is it a wise man, who knows that he is not wise
. it's good to have cynicism but not be cynical
. the more truth you live with, in your life, the stronger you are
. intelligence is merely an attitude to knowledge and learning