Reminds me of something out of BRANDED 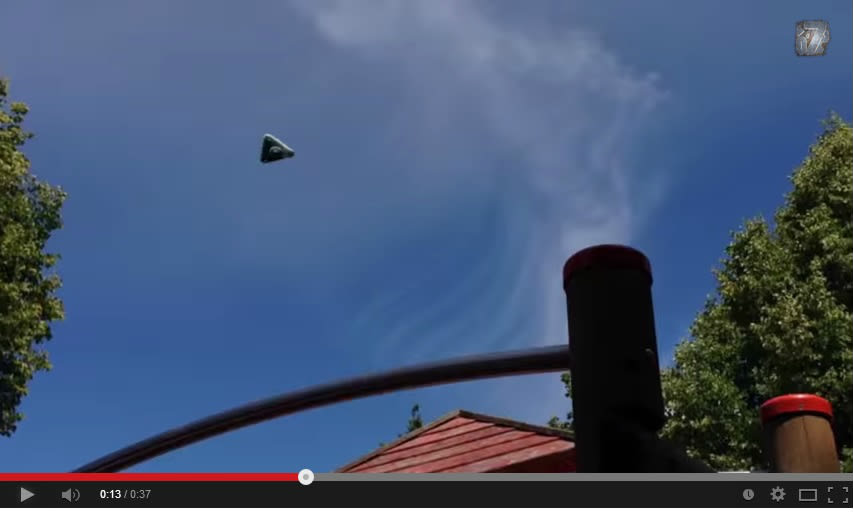 New video footage showing a suspected triangular UFO hovering over the Germany sky has reignited the age-old debate of the existence of aliens.

The video was recorded in June this year, but another two more similar videos showing UFOs flying over the Brazil sky only gives strength to those who believe in aliens.

The Germany UFO sighting video was uploaded on YouTube by O7TV. It shows the filmer having fun with his son in a park, when he spotted the uninvited guest on Earth.

A debate is now raging over the video's authenticity.

Meanwhile, Scott C Waring from the popular website UFO Sightings Daily has claimed that the video is 'real'.

"The fact that the person blurred out the face of the kid and didn't get the UFO in the dead center of the video is what causes me to believe this is real. Also, the lighting and shading on the UFO matches that of the trees and the bars of [the] jungle gym," Waring said.

..thanks for the due-diligence Elfis....

Yer welcome. It's frustrating, I know.

It really does seem that our modern go-to Occam's Box-cutter for UFO "evidence" is ... "is this PR / viral / stealth marketing?"

As detailed below, it is a hoaxed UFO signed (pun intended) by the hoaxer, "Oondyla".

Many UFO hoax videos in fact indicate their creator, in the same way that some crop circles were signed by their creators.

Many people that comment on such hoaxes/artwork don't seem aware of the fact that a game is being played, let alone the rules of the game or the identity of the major players in the game...

In short, the video is signed (pun intended) by the hoaxer on a road sign that appears at the end of the video.

At the end of the video, the image zooms out and a road sign becomes visible at the bottom right of the screen.

If you enlarge that part of the video, you can see the name "Oondyla".

"Oondyla" is the Youtube name of the user that uploaded the video in 2011. His Youtube video channel also happens to include:

(1) A video illustrating his skills in creating video special effects.

(2) Other UFO videos that happen to have the name "Oondyla" on signs in the videos.

Also, if you have a glance at the oondyla.com website via the Internet Archive's Wayback Machine then you will see that Oondyla.com was set up as a viral marketing website:

This reminded me of another thread here years ago. In that instance the object turned out to be a bunch of novelty helium balloons tied together. Here's the thread:

Oh and here's me 10 years ago to the day with the debunking video. Man I'm getting old.