Disk-shaped object found at bottom of the Baltic Sea.

Disk-shaped object found at bottom of the Baltic Sea.

A SWEDISH team searching for booze on the bottom of the ocean may have found a UFO instead.

The Ocean Explorer team made several million dollars back in 1997 when it located the wreck of the trade ship Jonkoping.

On board was a consignment of 1907 Heidsick Monopole Gout Americain, the corks of which were popped late last year after wine buffs snapped up the bottles for around $13,000 apiece.

That's kept Ocean Explorer team leader Peter Lindberg in the deep-sea suds search business ever since, but nothing he's found has caused as much controversy as a circle that turned up on a sonar survey on June 19.

Mr Lindberg didn't say much about it at the time apart from releasing the image and ruling out theories that it may be a land mine or algae bloom.

Obviously, that didn't generate enough attention, so now, after further examination, Mr Lindberg has gone public with some more details about the dimensions of the disc.

"At 87m down, between Sweden and Finland, they saw a large circle, about 60 feet in diameter," he told local media last week.

"You see a lot of weird stuff in this job but during my 18 years as a professional I have never seen anything like this.

"The shape is completely round … a circle."

Mr Lindberg said the team has also noted what they say could possibly be tracks running some 300m up to where the disc lies.

The team claims the tracks show the object has moved, either on or since settling to the ocean floor.

Six of the nine-member team were asleep in their bunks on-board the Ocean Explorer's ship at the time of the discovery, but the three watching the sonar "couldn't believe" what they were seeing.

Despite the promise of alien riches, Mr Lindberg said his team would not attempt to investigate the disc.

"It is not in our sphere of interest to go for this object, since it might be nothing," he said.

"We cannot afford spending funds just to have a look at it, even if it might be a new Stonehenge."

"It is up to the rest of the world to decide what it is."
The most dangerous traps are the ones you set for yourself. - Phillip Marlowe

The Scandinavian press is now reporting that the "Ocean X Team" is starting to explore this object. This from the team's website http://www.oceanexplorer.se/:

The ship Ancylus, carrying the Ocean X Team, is now anchored above the circle-shaped object. They started to scan the seabed and they are taking samples for analyses. Due to really bad weather conditions the operation took a little bit longer than scheduled. But they are working hard and prepare to dive down there for further investigations today.

BREAKING NEWS 2pm, The divers are now down and investigating the circle and reports from the ship say they are really amazed. There is definitely something unusual hiding at the seabed – a Mystery Beneath. More information and pictures will be released next week.

Look for the site for info about the project and what they have found out so far.

Ocean X Team has been conducting various diving excursions in North Europe for over 20 years. Their main focus has been to search for hidden treasures such as antique high-end alcoholic beverages and historic artefacts. Some excursions include the salvaging of champagne bottles from the wreck “Jönköping” in 1997. The treasure hunters, Peter Lindberg, Dennis Åsberg have been in the maritime industry since 1995.

Peter Lindberg, one of the co-founders of Ocean X Team started his wreck career by finding an American B-17 bomber in 1992, off the Swedish east coast.

In 1994 Peter Lindberg and his companions found information about a ship wreck loaded with champagne and cognac in local court archives. This lead to the great find of the small schooner “Jönköping” in 1997 and the salvage of the same in year 1998. 2400 bottles of Heidsieck & Co MONOPOLE Gôut Americain 1907 champagne where recovered from the wreck and raised world record prices when sold at Christie’s auction house in London. Peter Lindberg has participated in many other wreck projects and salvages and is constantly working on new projects.

The Swedish Expressen has published the first story about what the divers have found. Via Google translate (video at link):

Such is the mysterious circle out at close range


The circle on the bottom of the Baltic became a world first when it was discovered a year ago - now thickens the mystery.

The Expressen can now publish exclusive pictures from the first dive at the item - at 85 meters depth.

- We were there to find answers, but only got even more issues, says Stefan Hogeborn, 47, one of the divers from Ocean X Team, which investigated the circle on the bottom of the Baltic.

On June 11 last year went nine professional divers on the Baltic Sea to locate shipwrecks. The divers ran in zigzag back and forth over a large area to search for a number of specific wrecks - when a large, round formation showed up on their scanner screen. They examined the object closely and what they found puzzled the whole world.

Some of Sweden's leading researchers in marine archeology saw the first pictures from the circle that was taken with the so-called sonar, a scanner tool, but no one could answer what the pictures depicted.

The mysterious discovery spread in the media worldwide, such as CNN reported on the Baltic Sea Mystery. So far no pictures from diving in the circle published.

Now Express - the first newspaper - publish the first pictures from the dive at the mysterious object. A dive that was supposed to provide answers to the mystery - but instead brought even more questions.

Stefan Hogeborn has 20 years experience of diving and working as underwater photographer and dive instructor. Here he describes the first dive at the world famous circle in the Baltic Sea:

- The first thing we will see is some kind of rock formation that looks to be cast in cement, he said.

When they swim further, they see several rock formations.

- It looks almost like a pearl necklace or that someone has tried to make a fireplace with an inch-sized rocks on the ocean floor.

The furnace-like rock formations on top of that which constitutes the large circle that was discovered with a scanner tool last year. Divers images shows that the circle in turn consist of several blocks formed by "rolls" or "mushrooms" that is attached to each other, forming the circle. Overall, the object is 60 meters long and about as wide.

- When we had swum across the object, we get to the weird thing. Then it's like someone has pinched the mountain at the edge, as if you have breathed together two molds, and it sticks out between stone formers, said Stefan Hogeborn.
"Probably sandstone"

At the next dive, they took a sledgehammer to dislodge a piece of material. Stefan Hogeborn describes the sense of carbonized material. During the last dive divers discover an oblong hole in one and a half times the six inches that go into one of the rocks which form the circle.

- I have never, ever, ever, seen anything like it, says Stefan Hogeborn.

Expressen has let Martin Jakobsson, a professor of marine geology and geophysics at the University of Stockholm, see an image from the dive.

- There is probably some kind of sandstone. When you look at the structure, it looks like it, he says.

The samples from the discovery of the Baltic Sea has been sent for analysis.

- Since we did not get any answers to the questions we asked ourselves, we have brought this to the experts who may be looking at the pieces we brought up, says Stefan Hogeborn.

I don't think its a hoax as suggested by the following post - sounds more like they are just enjoying the fanfare and want to prolong the mystery for publicity's sake...

Just a quick update with some new developments that’s been causing havoc on the Ocean X Team’s Facebook page, which has seen a lot of non-moderated activity in the last couple of days.

Moderators stepped in quickly today though when a local long-time professional marine archaeological diver — a resident of Norrtälje, where the Ancylus is moored — posted a picture of her son on the Ancylus bridge together with a comment that read along the lines of “no no, the anomaly is surely not a UFO.” The photo and comment were quickly deleted. 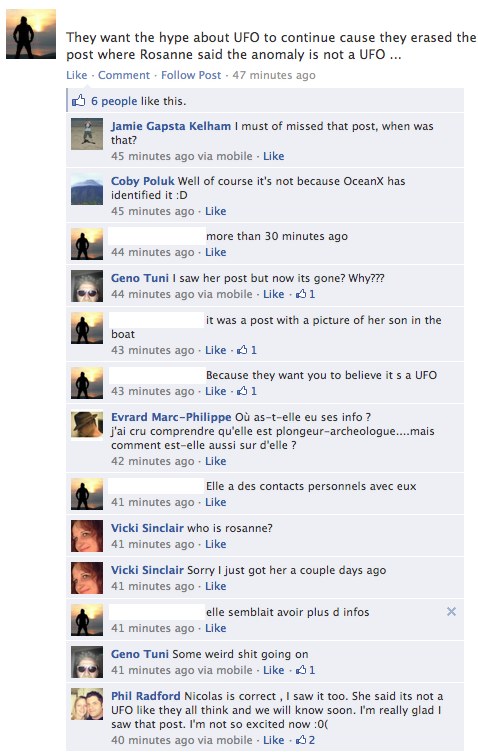 elfismiles wrote:I don't think its a hoax as suggested by the following post - sounds more like they are just enjoying the fanfare and want to prolong the mystery for publicity's sake...

I think calling this a "hoax" would be too much. Like you say, the team is partly in it for creating publicity for the company and that explains the ambiguity of their comments. Anyway we cut it, this mission cost money and they naturally aim to recoup at least some of the losses someway. This being a UFO was always just a theory and for example the Expressen piece seems to make it pretty clear the thing below the Baltic is not a spacecraft. It is apparently something anomalous for those waters, though, and IMO well worth to investigate properly.