How do the two fit together?

This question’s been yelling itself in my face for the past couple of days. (Weeks?) Not only in theoretical terms, but in practical ways. Touched on by elders, peers, friends, strangers.

Roughly (and this is my own attempt, for which I’ll accept blame but not credit):

Some groups are great at building and exemplifying models of anti-oppressive ways of being. (Pre-figurative politics, as I understand it, means practicing now the kind of society you want to build in the future.) Enacting horizontal group dynamics, confronting white supremacist and racist behavior, challenging and transforming sexism, homophobia, transphobia, fatphobia, ableism, etc. in myriad ways, and continually developing sophisticated, intersectional analyses of these lived oppressions. Honoring and valuing healing; promoting literacy around dealing with trauma and mental wellness. Developing healthy sex-positive cultures grounded in consent. Practicing conscientious methods for dealing with intimate violence and abuse. Giving and receiving criticism with humility, generosity, bravery, and kindness. Doing very practical things like organizing childcare collectives, artmaking groups, and food distribution programs; infusing them with liberatory values. Transforming estranged relationship with our bodies, the earth, and nature. Theorizing these and more practices, and sharing them.

At the same time, some groups are great at developing people’s revolutionary class consciousness. Examining the material processes of history with an eye toward figuring out the best ways to intervene in those historical processes, and change things for the better. Get rid of classes altogether. Put an end to imperialism. Employ practice and theory, in current conditions, to avoid the pitfall of reformism and move militantly and decisively toward a world of “freely associating producers” — a world where violent compulsion is no longer ambient, as it is under capitalism and has been under all forms of class society (to stake a claim against what I learned about Foucault, in college). I’m impressed and inspired by groups that maintain a keen focus on this goal, and whose work reflects the urgency of building the class power necessary for exploited people to liberate themselves/ourselves from the yoke (and rod) of capital.

Now. Is there overlap between these ‘types’ of groups?

In the Bay Area? In the US?

IIIIIIII dunno. What do you think? What are you finding?

That’s all for now; more questions than answers.

The ability to labor resides only in a human being, whose life is consumed in the process of producing. First it must be nine months in the womb; must be fed, clothed, and trained; then when it works its bed must be made; its floor is swept, its lunchbox prepared; its sexuality not gratified but quietened; its dinner ready when it gets home, even if this is eight in the morning from the night shift. This is how labor power is produced and reproduced when it is daily consumed in the factory or office. To describe its basic production and reproduction is to describe women’s Work.

--Selma James, "The Power of Women and the Subversion of the Community" 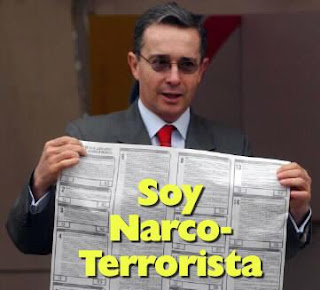 Last month's capture of Colombian drug lord Daniel "El Loco" Barrera by Venezuelan police was hailed as a "victory" in the "War on Drugs."

Barrera, accused of smuggling some 900 tons of cocaine into Europe and the U.S. throughout his infamous career, was described by Colombian President Juan Manuel Santos, who announced the arrest on national television, as "the last of the great capos."

But what of the "capo" who enjoyed high office, is wined and dined by U.S. corporations and conservative think-tanks, owns vast tracks of land, is a "visiting scholar" at a prominent American university (Georgetown) and now sits on the Board of Directors of Rupert Murdoch's News Corporation?

When will they be brought to ground? People get used to anything. The less you think about your oppression, the more your tolerance for it grows. After a while, people just think oppression is the normal state of things. But to become free, you have to be acutely aware of being a slave. i am the seventeen year old girl crying alone, bracing herself for the makeshift abortion in the dingy apartments behind the McDonald’s

i am the zoned-out junky in the alleyway, pookie-pipe in hand, because life threw her too many curve balls

sister, i am you…just as you are me

hit by the same struggle

and yearning for the same liberation

[it’s like: my thoughts on militancy in revolutionary organizing]

this is what the meaning militant is like for me… “Art can bring change, I am sure.
If people see an artwork,
it will perhaps only cause a small shock to their mind,
but that can grow and grow.”

Shamsia Hassani, Art in the streets of Kabul Digging in the crates and found this portrait of my homegirl Desiree and her pops.