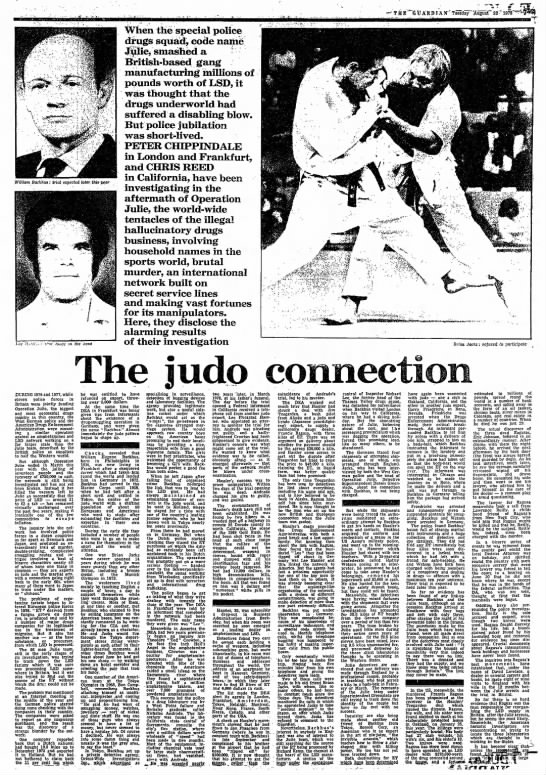 Fred Crisman and the Servants of Awareness


As noted in part two of our Rev. Broshears extravaganza, Garrison suspected (or believed, or pretended to believe) that an assortment of fringe religious groups—or “odd sects” as he called them—had been used as fronts for a sprawling JFK assassination conspiracy; political assassins running around in clerical garb with instruments of death concealed within the flowing folds of their robes!

As stated in the passage above, when a Garrison staffer quizzed him about “Service Awareness,” Crisman claimed he had no involvement with the group. However, “Service Awareness” was a transcription error; it should have read: “Servants of Awareness.” So who the heck were they?

According to The Sound, a newsletter published by Cosmic Awareness Communications:

“On Thanksgiving day, 1962 a voice expressing itself as Cosmic Awareness began speaking through a university lecturer and ex-army officer who had been in the Bataan Death March.” 00001

The “university lecturer and ex-army officer” was a fellow named Frank Duby, thereafter referred to as the “Interpreter.” According to Cosmic Awareness newsletter: “…[Duby] began studies in depth psychology at [a] Seattle church through funding given by the CIA…” 00002 and it was this “depth psychology” research that led to the formation of a Servants of Awareness forerunner, the Organization of Awareness. 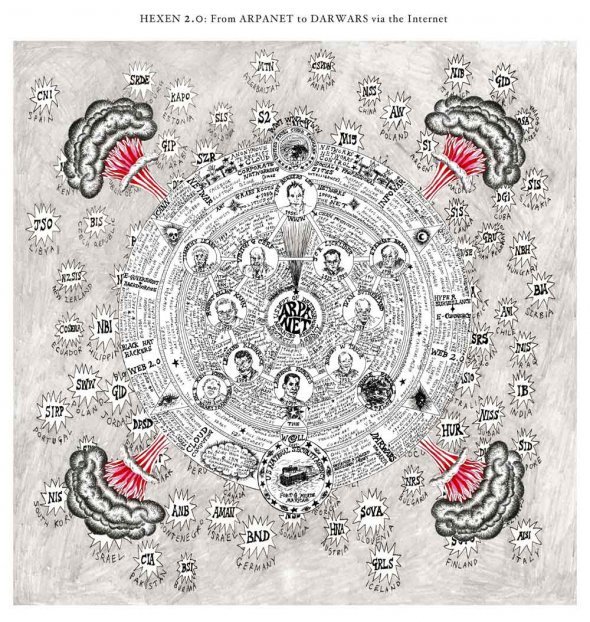 The cards are labelled as conventional Tarot cards, but their subject matter and information content is historical. The first, ‘0’, is ‘The Fool’ – none other, here, than Aldous Huxley. The writing that surrounds a sketch of his face includes, amongst other things, ‘1954 The Doors of Perception,’ ‘Vedanta Society California,’ and ‘LSD’ – it tells us what Treister considers most relevant about the man, what he wrote and what he was into. ‘I The Magician’ is Timothy Leary, presented similarly. ‘II The High Priestess,’ is not a person but the Macy Conferences held in the US between 1946 and 1953, in which cybernetics as a distinct field is conventionally held to have been born. Treister lists many of the attendees at the meetings (though not quite all – where is Grey Walter, for instance?) and tells us a little about the background and interdisciplinarity of these meetings (including a statement that the meetings were ‘US government funded,’ though actually the money came from the Josiah Macy Jr Foundation – hence the name). And so on.

The cards are reproduced at a larger scale in the book, which begins with a short introductory essay by Lars Bang Larsen and five new images or maps, ‘historical diagrams, which function as the key to the project’ and which, so to speak, put the Tarot cards in their place, indicating how they can fit into a bigger picture. The bigger picture is, however, by no means straightforward. The maps are dense with text laid out radially, with an all-seeing eye at the centre of the first, surrounded initially by ‘Tavistock Institute CIA,’ ‘Unabomber Manifesto,’ ‘Cybernetics,’ ‘Macy conferences’ and ‘MK Ultra,’ followed by clouds of further information on novelists, philosophers, film-makers and intellectual and political movements. This map is labelled ‘From Diogenes of Sinope to Anarcho-Primitivism and the Unabomber via Science-Fiction.’ The labels of the other maps refer to MKUltra, the counterculture, technogaianism, national socialism, cybernetics and the Macys again, neo-totalitarianism, the computer, the Antikithera mechanism, quantum telepathology, Arpanet, Darwars and the internet. We get the idea, even if we aren’t quite sure what the Antikithera mechanism and MKUltra were without reading the cards (an ancient Greek mechanical computing device and a CIA mind-control programme respectively).

Treister also insists that these maps are not independent, with many people and institutions appearing in more than one. So Larsen is right to begin his introductory essay with a quote from Thomas Pynchon’s Gravity’s Rainbow – in Treister’s historical vision, connections proliferate in surprising and disturbing ways, which is one of the great strengths of her work. But a certain simplification is possible and might help in interpreting her work. HEXEN2.0 echoes and amplifies Donna Haraway’s famous ‘Manifesto for Cyborgs.’ Haraway was drawn to the ambiguity of the figure of the cyborg (the cybernetic organism). Lacking any essence, with no ideal form given by God in the Garden of Eden, the cyborg could become anything. So cyborgs might have been born in the belly of the military-industrial beast in WWII, but that doesn’t mean we should give up on them. We should instead be intensely interested in cyborg becomings – in how they/we might evolve in personally and politically promising ways. And seen from that angle, Treister offers us her own historically grounded vision of how these two threads have evolved to the present: the dark side (the Five of Swords, for example, a splendidly sinister card for Google: ‘entire web stored in Google database – online domination – total control – cooperation with governments and CIA – files on world population’s genetic data’) and the light (try, well, the Two of Chalices: The Summer of Love, which also gets you flowerpower and the civil rights movement). 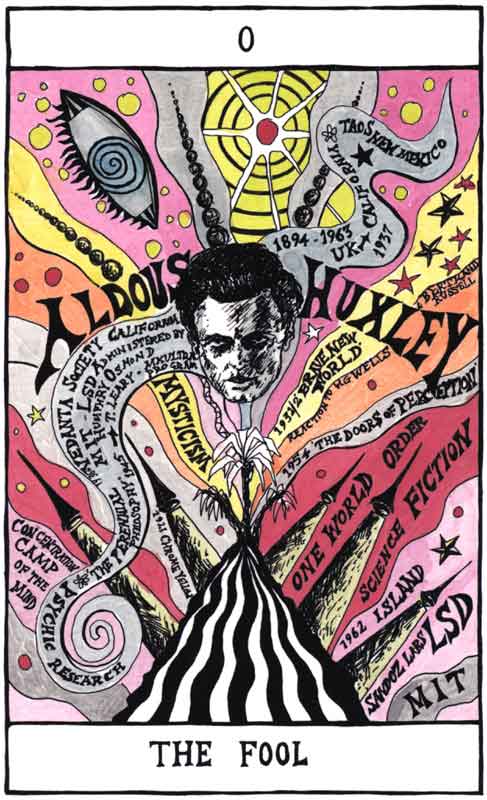 Does it matter what we call ourselves? You can refer to us any way you want. Your Sweet Fairy Godparents. Your Spirit Guides or Extraterrestrial Midwives or Personal Diplomatic Representatives to the Queen of Heaven.


Do you remember your dream of the saintly anarchists burning heaven to the ground? That was real. That was us. We can't in good conscience tolerate institutions that kill people with love.


Do you remember your dream, from the night before your seventh birthday, of the janitors with the pet vultures taking the garbage out from under your bed? That was real. That was us. We own all trash everywhere, after all. We were just ministering to what's ours.


We're inside your shadow, beauty and truth fans, helping you use your terror to become rich and famous -- if that's what you want.


We're percolating up from the ground beneath you, bringing you the Gnostic African Buddhist music of the ever-growing roots -- if that's what you want.


Like a tick in the navel of the seven-headed, ten-horned beast of the apocalypse, we're even riding on the underbelly of tonight's satellite transmission from CNN, MTV, UFO, and CIA, broadcasting to you on location from wherever we happen to be at the moment -- if that's what you want.


So. What do you want, anyway?

A secret order. Volume 1 : investigating the high strangeness and synchronicity in the JFK assassination
By H. Albarelli, Jr.

After taking the psychedelic drug ayahuasca, Martha Sneyd went into an extended altered state diagnosed as psychotic. Her terrifying ordeal ignited a spiritual initiation that eventually brought gifts of awakening, insight, and compassion. How did Martha emerge from her ecstatic journey through a mythic, archetypal world to become an advocate and teacher? What lessons can we learn about the dangers — and potentials — of psychedelics and of altered states of consciousness labeled “madness”? Today she is a mental health case worker in the UK National Health Service, co-director of an interdisciplinary research team, and voice for more humane and spiritual treatments for madness.

Just sitting here shaking my head. Thanks for the book AD (A Secret Order). My, isn't the JFK assassination a slam dunk of a conspiracy given the sharing of information. If Garrison knew what we know now. Evil knows no bounds.

I'm still curious about psychedelics. Good? Bad? Or like anything else, for a hammer can be used to build you a house, or bash your skull in.

I can see how psychedelics in the hands of the military is dangerous. But of course, militaries are designed to be dangerous.

I've definitely changed in my view of psychedelics since my teen years- beyond good or bad to: complicated, powerful, useful but not a panacea, etc.

...but not a panacea

I've come to that realization too. I'm not sure what would make life worth living anymore anyhow. Still, I believe they can be used to raise your conscious. The introversion psychedelics can induce as well as ecstacy can have an effect on the soul. Regardless of how they're perceived in society, I believe drug use during the 60's helped create the peace movement, encouraged rebellion from a stolid, wayward populace. Jazz, blues, pretty much all music wouldn't be as great without narcotics. I'm amazed by civilization's programmed nausea towards drug use. East India Company dealt in tons of opium, building up trade and colonialism. Should you need a tooth pulled or some form of surgery, you'll be extremely thankful opiates exist. Cocaine was once socially acceptable, used quite often as a remedy. They should just be legalized. Its clear that drug use, for whatever reason, won't stop. Tantra is chakra awakening? We live in a society that celebrates war, in fact, the most powerful industries are those that foster war. We work for heartless corporations that exploit the world's resources for monopoly money. Its the monstrosity that society has become that drives people mad. The delusion is we can keep going on like this. My ex-wife is/was a psychologist. I've met many with a doctorate in psychology and they were no more prepared to deal with this merciless world than any other. I wouldn't trust any book (DSM-X) that once diagnosed homosexuality as a deviant psychological behavior anyhow. All is perceived/distorted through the lens of societal belief systems. God is male, soldiers are heroic, women are the weaker sex, leftist are in the minority, might as well bring racial discrimination and religious bigotry into the fold. Who isn't "delusional" anymore?