The Metrics of Ruling the World.

https://www.linkedin.com/pulse/cash-policy-tool-interview-hon-dr-harald-malmgren-tavares
Governments would very much like such ledgers to exist because they could view everything that is taking place financially in real time, including ability to evaluate net worth, patterns of spending and of earned and unearned income, and of course, an instant assessment of all taxable activities. Governments would be able to gauge overall economic activity in real time, no longer needing to wait for months the collection of revenues and sales of businesses and surveys of consumer spending.

I've spoken to environmental scientists who are in a dire struggle to secure data they can be confident in.

Maybe a dislocation of the powerful from empirical facts gives them free reign to impose their will in an intuitive fashion.

Kinda sucks for the rest of us, though.

How are you feeling about your question in the OP these days, Wombaticus Rex?

I suspect there is no real contact between those who rule the world and the world they rule.

Their priorities are shaped by crises. This is not just a calculated ploy to take advantage of a fluid situation; it's also more than they're capable of monitoring. Their paranoia is shaped not only by the knowledge their roles are precarious and their lives are disposable; it's also the result of a workday that is 99% dealing with intractable problems using broken systems.

“The best way to get management excited about a disaster plan is to burn down the building across the street.”

The worst thing one can do is to confront human beings bluntly. A warrior proceeds strategically. If one wants to stop our fellow men one must always be outside the circle that presses them. That way one can always direct the pressure.

Castaneda, Journey to Ixtlan.
It is a lot easier to fool people than show them how they have been fooled.

Human and nature dynamics (HANDY): Modeling inequality and use of resources in the collapse or sustainability of societies

• HANDY is a 4-variable thought-experiment model for interaction of humans and nature.
• The focus is on predicting long-term behavior rather than short-term forecasting.
• Carrying Capacity is developed as a practical measure for forecasting collapses.
• A sustainable steady state is shown to be possible in different types of societies.
• But over-exploitation of either Labor or Nature results in a societal collapse.

Abstract
There are widespread concerns that current trends in resource-use are unsustainable, but possibilities of overshoot/collapse remain controversial. Collapses have occurred frequently in history, often followed by centuries of economic, intellectual, and population decline. Many different natural and social phenomena have been invoked to explain specific collapses, but a general explanation remains elusive.

In this paper, we build a human population dynamics model by adding accumulated wealth and economic inequality to a predator–prey model of humans and nature. The model structure, and simulated scenarios that offer significant implications, are explained. Four equations describe the evolution of Elites, Commoners, Nature, and Wealth. The model shows Economic Stratification or Ecological Strain can independently lead to collapse, in agreement with the historical record.

The measure “Carrying Capacity” is developed and its estimation is shown to be a practical means for early detection of a collapse. Mechanisms leading to two types of collapses are discussed. The new dynamics of this model can also reproduce the irreversible collapses found in history. Collapse can be avoided, and population can reach a steady state at maximum carrying capacity if the rate of depletion of nature is reduced to a sustainable level and if resources are distributed equitably. 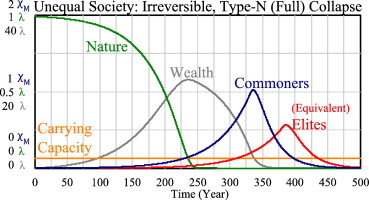 Return to Data And Research