BREAKING: In an (upcoming) interview with Andrea Mitchell, Mike Pence calls for the Mueller probe to be cut short "for the good of the country."

#BREAKING: In an (upcoming) interview with Andrea Mitchell, Mike Pence calls for the Mueller probe to be cut short "for the good of the country."
Show this thread

In 2014, Renova (the Russian firm tied to Columbus Nova, which reportedly funneled $500K to Cohen) poured $$ into a shady super PAC for an employee who ran for office.

The PAC was linked to consultant Nick Ayers — who is now Mike Pence's chief of staff.
https://www.opensecrets.org/news/2014/1 ... -spending/ … 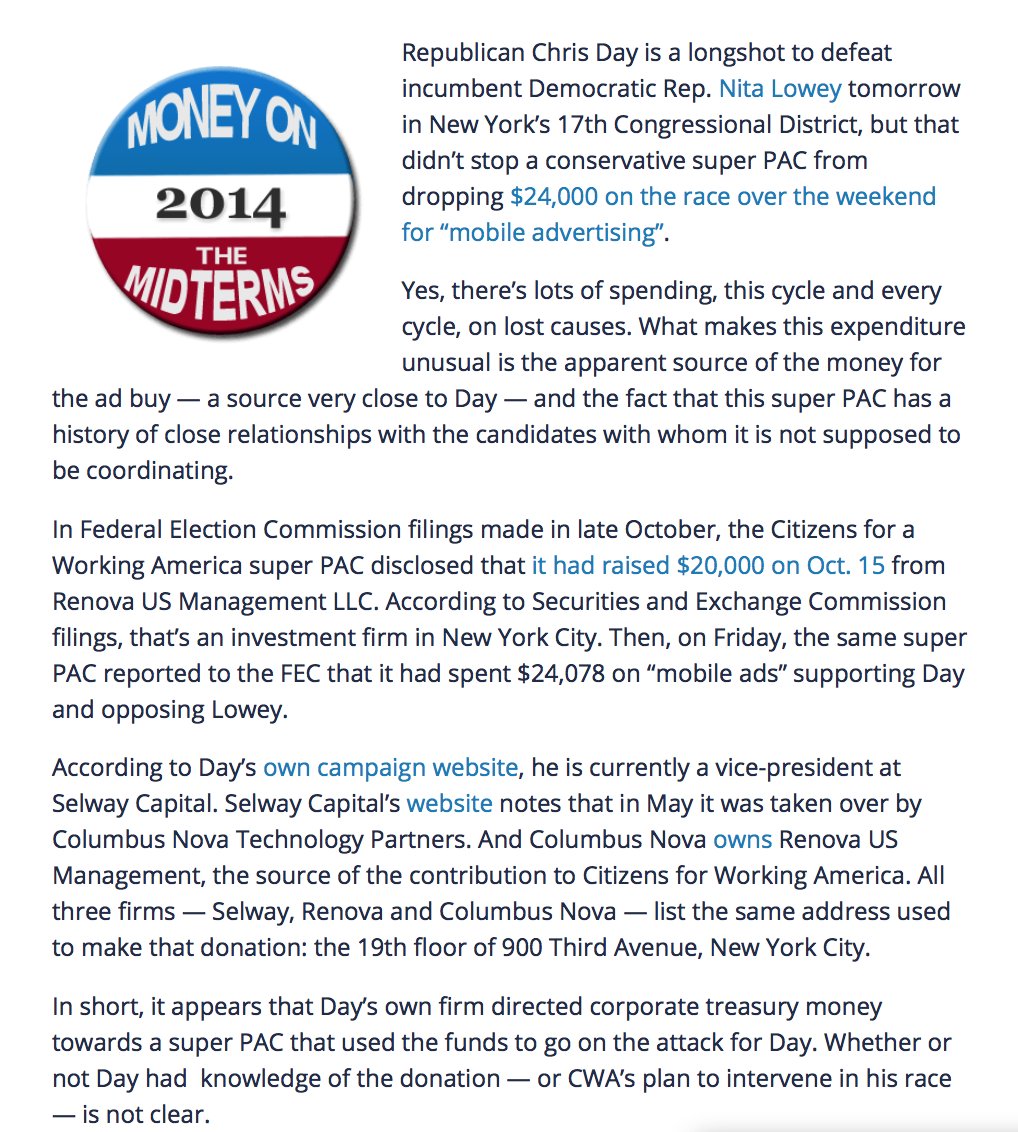 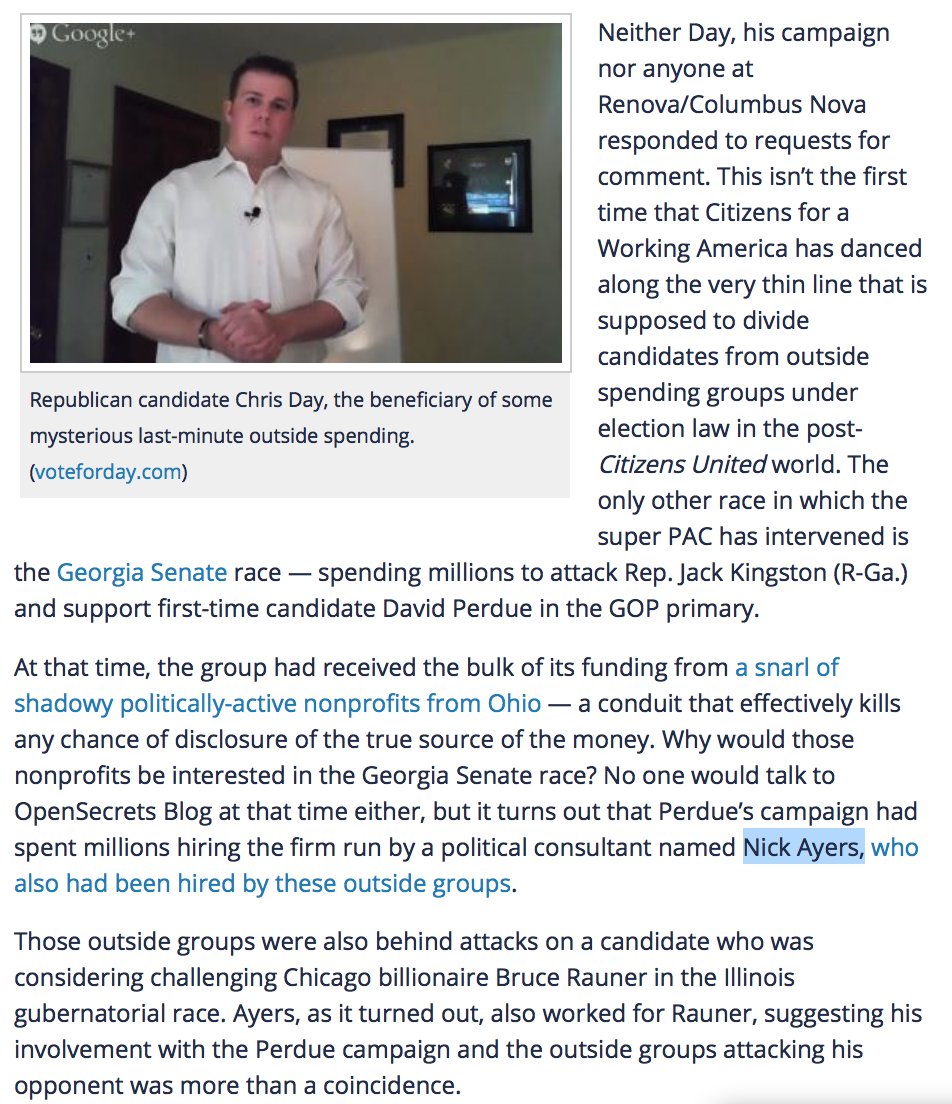 Nick Ayers, who is currently Mike Pence's Chief of Staff, partnered with Brad Parscale, Rick Gates, Paul Manafort, David Bossie, & a few others to start the pro-Trump dark money group America First Policies, which was bankrolled by the Mercer family.

When Mike Pence brought Nick Ayers on as his chief of staff, Ayers was described as Pence's "fixer."

...does that remind you of anyone else?

(Ayers' work on the Trump-Pence campaign was classified as unpaid volunteer work.)

Nick Ayers volunteered as a top aide for the Trump-Pence ticket while doing paid work for other candidates. 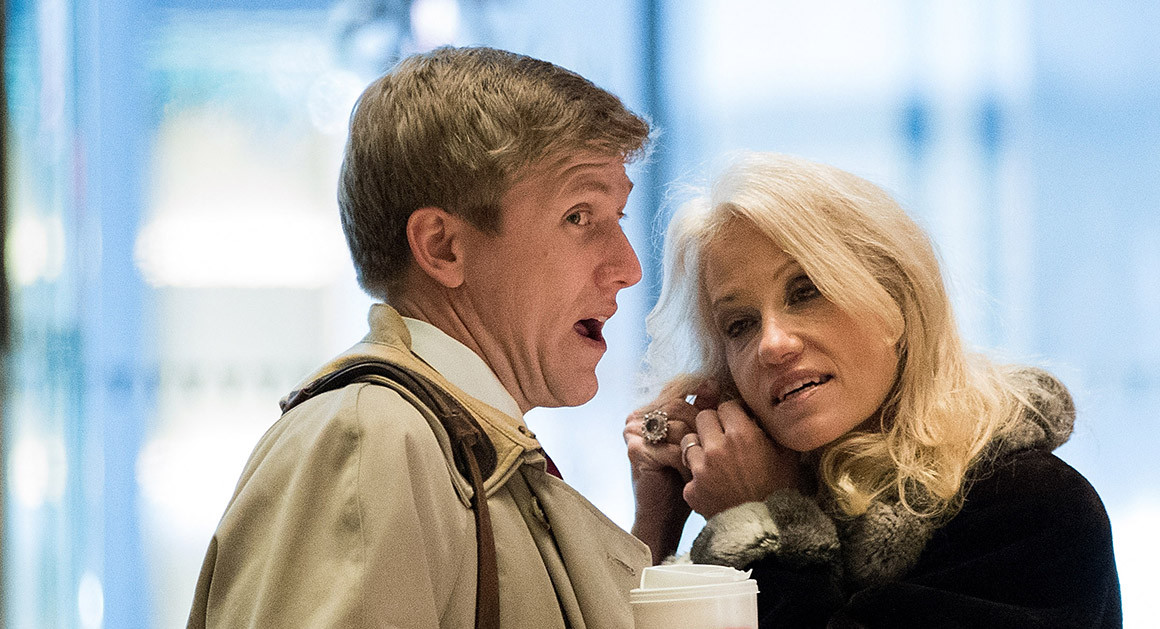 Nick Ayers, a senior adviser to Pence during the presidential race and now his chief of staff, joined the 2016 team as a volunteer and never took a dime in salary from the Trump-Pence campaign even as he crisscrossed the country with Pence, then the Indiana governor. He served as one of Pence’s top aides and prepared him for critical events, including his debate with Sen. Tim Kaine (D-Va.), the Democratic vice presidential nominee.

But Ayers’ Georgia-based political consulting firm, C5 Creative Consulting, did receive a payment of nearly $75,000 on Aug. 25 from Pence’s gubernatorial reelection campaign, 40 days after Pence had been selected as Trump’s running mate and withdrawn from the governor’s race.

His work for multiple campaigns raises questions whether Pence’s gubernatorial reelection campaign was subsidizing, in part or in full, Ayers’ work for Trump — though the arrangement may have been perfectly legal, experts told POLITICO. Any payments from different campaigns for Ayers’ work on the Trump-Pence campaign would qualify as an illegal in-kind contribution, but there is no indication that this took place.

The data come from a POLITICO review of campaign finance disclosures and Ayers’ previously undisclosed financial disclosure form for his employment in the Trump administration, which was provided to POLITICO.

“You can see how a person like Ayers, who has a longtime relationship with Pence, would work for the Trump campaign without compensation,” said Brendan Fischer of the nonpartisan watchdog group Campaign Legal Center.

Still, he added, Ayers “would be pretty well extended while working for those three campaigns at once.”

“C5’s contract with the Pence re-elect covered only services and expenses related to the gubernatorial campaign,” Pence’s press secretary, Alyssa Farah, said in a statement to POLITICO. “Once the Vice President joined the ticket, his legal counsel meticulously closed out contracts and services that were no longer being provided, including C5’s, which occurred within 45 days of the Vice President joining the ticket. C5’s services, including work performed by Ayers, for other campaigns had nothing to do with his relationship or duties to the Trump campaign.”

Experts raised their eyebrows at the setup but acknowledged that, while unusual, such arrangements are legal.

“Is it possible he could have legitimately been doing work for them at the same time? Yeah, it’s possible,” said Brett Kappel, a GOP campaign finance attorney and a partner at Akerman LLP. “You have to know how many hours he was spending on each one.”

If Ayers was being paid to work for the presidential campaign by the gubernatorial operation while volunteering for the Trump-Pence ticket, the money his firm received could constitute a violation of federal campaign finance law, said Craig Holman, government affairs lobbyist at the watchdog group Public Citizen. The law limits the amount of payments, in the form of goods and services, that campaigns and companies can donate.

“If he was a genuine volunteer, that’s permissible, but if he was being reimbursed for his activity or financed for his activity [by another company or campaign], that’s an in-kind contribution,” Holman said. Such a contribution would be subject to the federal $2,700 limit on donations to presidential campaigns.

Ayers’ financial disclosure also revealed a lucrative career beyond his political consulting business, which helped elect Bruce Rauner as governor of Illinois in 2014. The firm also did consulting work for major firms like Coca-Cola and Aflac, according to the disclosure.

Ayers received a waiver from the White House allowing him to communicate with former clients, an arrangement that could otherwise constitute a violation of ethics rules. Like others issued by the Trump administration, Ayers’ waiver does not include a signature or date showing when it was created.

Ayers’ various investments, including in a range of health care and technology companies and real estate, coupled with his consulting work, have made him a wealthy man. He is worth between $12 million and $55 million, according to the disclosure.
https://www.politico.com/story/2017/10/ ... ure-244005

Oh, that's not suspicious at all.

A lot of complicity’s with this corrupt treasonous cabal! 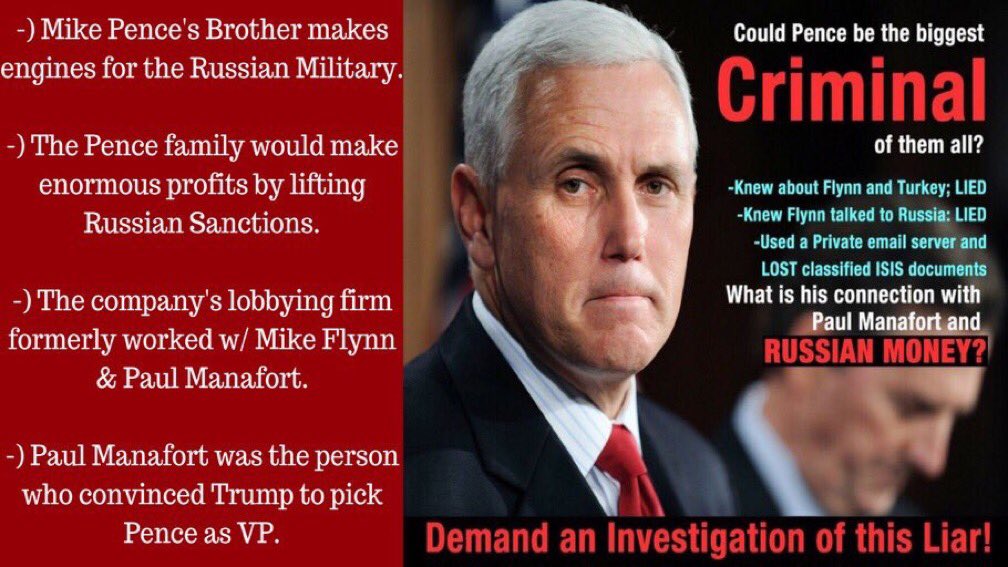 Nothing to see here...They have a “special” relationship! 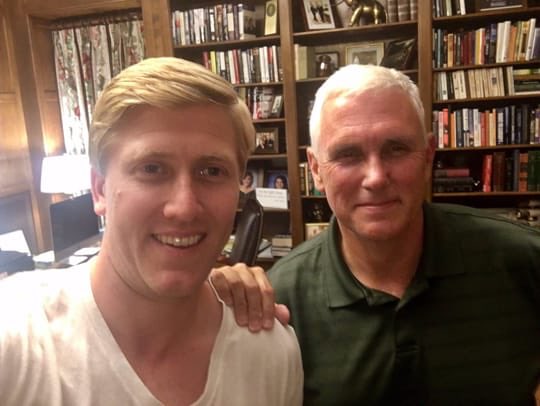 Who else offered unpaid volunteer work?

Useful to remember tha5 there is no question that VPs can be indicted.

https://twitter.com/RVAwonk/status/994563861939478529
Mazars and Deutsche Bank could have ended this nightmare before it started.
They could still get him out of office.
But instead, they want mass death.
Don’t forget that.

Trump is no longer the worst person in government

Donald Trump, with his feral cunning, knew. The oleaginous Mike Pence, with his talent for toadyism and appetite for obsequiousness, could, Trump knew, become America’s most repulsive public figure. And Pence, who has reached this pinnacle by dethroning his benefactor, is augmenting the public stock of useful knowledge. Because his is the authentic voice of today’s lickspittle Republican Party, he clarifies this year’s elections: Vote Republican to ratify groveling as governing.

Last June, a Trump Cabinet meeting featured testimonials offered to Dear Leader by his forelock-tugging colleagues. His chief of staff, Reince Priebus, caught the spirit of the worship service by thanking Trump for the “blessing” of being allowed to serve him. The hosannas poured forth from around the table, unredeemed by even a scintilla of insincerity. Priebus was soon deprived of his blessing, as was Tom Price. Before Price’s ecstasy of public service was truncated because of his incontinent enthusiasm for charter flights, he was the secretary of health and human services who at the Cabinet meeting said, “I can’t thank you enough for the privileges you’ve given me.” The vice president chimed in but saved his best riff for a December Cabinet meeting when, as The Post’s Aaron Blake calculated, Pence praised Trump once every 12 seconds for three minutes: “I’m deeply humbled. . . . ” Judging by the number of times Pence announces himself “humbled,” he might seem proud of his humility, but that is impossible because he is conspicuously devout and pride is a sin.

Between those two Cabinet meetings, Pence and his retinue flew to Indiana for the purpose of walking out of an Indianapolis Colts football game, thereby demonstrating that football players kneeling during the national anthem are intolerable to someone of Pence’s refined sense of right and wrong. Which brings us to his Arizona salute last week to Joe Arpaio, who was sheriff of Maricopa County until in 2016 voters wearied of his act.

[Jennifer Rubin: This is why Pence’s sickening embrace of Arpaio is so important]

Noting that Arpaio was in his Tempe audience, Pence, oozing unctuousness from every pore, called Arpaio “another favorite,” professed himself “honored” by Arpaio’s presence, and praised him as “a tireless champion of . . . the rule of law.” Arpaio, a grandstanding, camera-chasing bully and darling of the thuggish right, is also a criminal, convicted of contempt of court for ignoring a federal judge’s order to desist from certain illegal law enforcement practices. Pence’s performance occurred eight miles from the home of Sen. John McCain, who could teach Pence — or perhaps not — something about honor.

Henry Adams said that “practical politics consists in ignoring facts,” but what was the practicality in Pence’s disregard of the facts about Arpaio? His pandering had no purpose beyond serving Pence’s vocation, which is to ingratiate himself with his audience of the moment. The audience for his praise of Arpaio was given to chanting “Build that wall!” and applauded Arpaio, who wears Trump’s pardon like a boutonniere.

Hoosiers, of whom Pence is one, sometimes say that although Abraham Lincoln was born in Kentucky and flourished in Illinois, he spent his formative years — December 1816 to March 1830 — in Indiana, which he left at age 21. Be that as it may, on Jan. 27, 1838, Lincoln, then 28, delivered his first great speech, to the Young Men’s Lyceum in Springfield. Less than three months earlier, Elijah Lovejoy, an abolitionist newspaper editor in Alton, Ill., 67 miles from Springfield, was murdered by a pro-slavery mob. Without mentioning Lovejoy — it would have been unnecessary — Lincoln lamented that throughout America, “so lately famed for love of law and order,” there was a “mobocratic spirit” among “the vicious portion of [the] population.” So, “let reverence for the laws . . . become the political religion of the nation.” Pence, one of evangelical Christians’ favorite pin-ups, genuflects at various altars, as the mobocratic spirit and the vicious portion require.

[Dana Milbank: The week that proved God exists — and has a wicked sense of humor]

It is said that one cannot blame people who applaud Arpaio and support his rehabilitators (Trump, Pence, et al.), because, well, globalization or health-care costs or something. Actually, one must either blame them or condescend to them as lacking moral agency. Republicans silent about Pence have no such excuse.

There will be negligible legislating by the next Congress, so ballots cast this November will be most important as validations or repudiations of the harmonizing voices of Trump, Pence, Arpaio and the like. Trump is what he is, a floundering, inarticulate jumble of gnawing insecurities and not-at-all compensating vanities, which is pathetic. Pence is what he has chosen to be, which is horrifying.
https://www.washingtonpost.com/opinions ... 2d74395055

“I’ve always said that George Will has two things: an amazing command of the English language and the unhesitating ability to cut a bitch when he wants to,” Wilson said on CNN Tonight.

The Never-Trump GOP strategist added that Will’s blistering column is surely to “leave a mark” for Pence, who “cast aside every conservative principle when it comes to defending Donald Trump.”

The Washington Post published a column Wednesday that Will wrote. It’s headline, “Trump is no longer the worst person in government,” referred to Pence, who, to put it mildly, Will cast in his article as a sell-out to the conservative cause.

In the first paragraph of Will’s column, the conservative commentator said that Pence “reached this pinnacle by dethroning his benefactor” and “is augmenting the public stock of useful knowledge. Later concluding the column, Will wrote, “Pence is what he has chosen to be, which is horrifying.”
https://www.mediaite.com/online/rick-wi ... ce-column/

Users browsing this forum: No registered users and 3 guests