Who are the Hurt Cats? - Anti-Semitism and Cat Theory

Who are the Hurt Cats? - Anti-Semitism and Cat Theory

As part of our ongoing campaign to transform General Discussion into worker-created freeform jazz Copy-Pasta collages about anti-Semitism and Anti-Fascism, I offer this as a sadhana... to our Inspiration and Holy Rule-Maker, Jeff. I offer my support and critical thinking skills by providing this critique of the deep historical and current connection of anti-Semitism to cats.
This important topic has generally been neglected in current thinking and I believe it is essential for us as a diverse anarcho/lefist community to confront this dialectic head-on and question:

Who are we in relation to Patriarchy, Whiteness and Cat Theory?

while not letting our confusion about what this actually means stop us from showing solidarity when called upon by felines to stand with them - and clearly not in a "standing over, sizist domination sense.

The importance of this has been shown by recent worrying moves on the Far Right.
The British National Cat Anarchist Party, filled with the "usual suspects", have begun a campaign of virulent propaganda using NAZI-affiliated cats.

Traditionally, catness has been used as a means of enacting 'power over' minorities through a deeply hateful use of "felinity" - a barely disguised 'codeword' for anti-Semitic filth. Consider the use of the cat here, the proximity and dependence of the "subservient lap-cat" to the world dominating source of evil - Dr Evil. 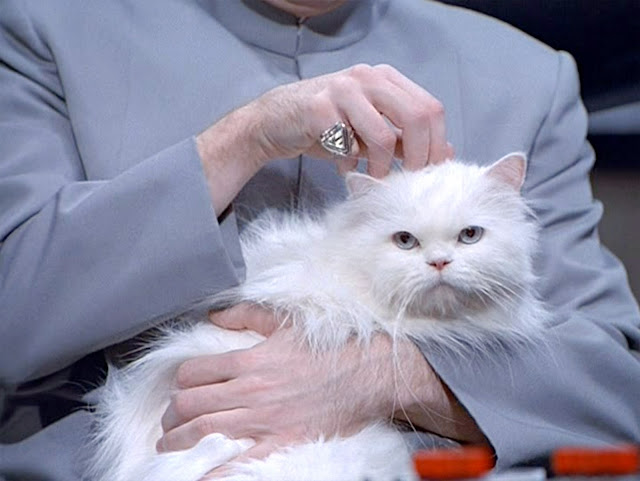 In more recent times, consider the blatantly overt anti-Semitism shown in the film "Wag The Dog" where the producer tries to put forward a Calico Kitten - one patterned with a cultural diversity of white, black and brown - but is powerless to overrule the President who wants a 'White Kitten', a symbol that clearly, with a little analysis, is one of anti-Semitism issuing from global Christian Hegemony.

Finally, I would like to reference the article - my bold for emphasis

Are the Smurfs Anti-Semitic Misogynists?

Smurf Village is a socialist haven: a kibbutz of sorts. In the Smurfs’ collective, everybody seems to be a happy worker (with the exception of Grouchy Smurf). There is no alienation or exploitation, and the means of production seem to be in the hands of the workers. Religion, as befitting a world without exploitation, seems to be nonexistent. All the Smurfs look alike — white clothes and white pointy hats — and live in identical mushroom-shaped houses. The only exception is Papa Smurf, who wears a Marx-like white beard and is dressed in red.

Within this allegory, the evil wizard Gargamel represents the greedy capitalist. In case you think this is a little far-fetched, his main ambition is to capture the Smurfs to consume them or turn them into gold.

Likewise, his pet Azriel, who is literally a “fat cat,” is obsessed with ensnaring and devouring the little blue workers. 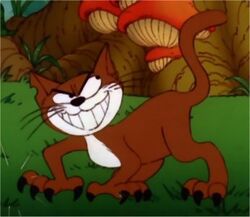 As I look at my screensaver of Jeff,

I hope this introduction to Cat Theory, which was written during my extremely busy time as a social justice activist, Mindlessness meditation instructor and Professor of Anti-Semitism Semiotics at Universidad de la Confusa, will serve as a call to feline solidarity and provide paws for thought.

Re: Who are the Hurt Cats? - Anti-Semitism and Cat Theory

are you sure that's not Phil Collins?