This is a screen capture from an online game designed for preschool age children called The Great Sky Race.

From a previous post in the Disney is CIA for Kids thread (now located in the psyops and meme management forum):

I wrote:I frequently stop on the Disney Channel now when flipping around cable. I have Hugh to blame for this as the programming is as vacuous and insipid as I had imagined. A while ago I came across a show called Little Einsteins.
Wikipedia synopsis - Little Einsteins features four children (two boys and two girls) — Leo, June, Quincy, and Annie — along with their intelligent and transformable space/air/water-craft, "Rocket". In each episode they embark on an adventure (or "mission") to solve some problem or help a new friend. These missions take them to far-flung locations including foreign countries and "extreme" environments such as Antarctica, underwater, or outer space. In some episodes, Rocket's nemesis "Big Jet" tries to steal something from them or beat them to a goal. The characters' respective talents and participation of the audience are required to surmount various obstacles to completing the mission. Each episode concludes with a "curtain call" crediting the team members, ancillary characters, and reviewing the featured art and music selections.

Mission is the language used on the show and on the Little Einstein's webpages. What made me look any of this up was the appearance of Big Jet.

I wrote:As an aside, you'll notice that Big Jet is shown in this image with a persistant contrail that appears to be creating a cloud. Hmmm...

From the Episode Guide on TV.com:

[url=http://www.tv.com/little-einsteins/show/49420/episode.html]19. Season 1, Ep 19: O Yes, O Yes, It's Springtime
9.35 Reviews
The gang travels to the Netherlands so that Quincy can plant his friend Baby Tulip, until Big Jet uses his new machine: A season machine to interfere with the kids Springtime.
Will the kids stop Big Jet from ruining Springtime?
Aired: 3/20/2006[/url]

Here's a complete list of Little Einsteins episodes via Wikipedia.


Is it intentional? I dunno. Maybe there's some graphic designer somewhere with an interest chemtrails. Maybe there's some graphic designer somewhere having a joke on a coworker who is a chemtrail nut. Maybe it's just coincidence. Maybe it's just a picture of a jet flying through a cloud as has been suggested.

Or maybe "The Great Sky Race" has more than one meaning? Maybe subliminally embedding the information "jets create clouds" into preschoolers brains is desirable to someone.

If this latter is the case and it's intent is to build a subconscious foundation for the normalcy of human cloud/weather engineering then it stands to reason that there would be other instances of this in children's media.

From Disney's Over the Hedge

From Disney's Cars
Last edited by brainpanhandler on Sun Mar 01, 2009 5:28 am, edited 1 time in total.
"Nothing in all the world is more dangerous than sincere ignorance and conscientious stupidity." - Martin Luther King Jr.

http://www.thomasvale.com/
"Nothing in all the world is more dangerous than sincere ignorance and conscientious stupidity." - Martin Luther King Jr.

http://www.youtube.com/watch?v=Buai86C0gY4
"Nothing in all the world is more dangerous than sincere ignorance and conscientious stupidity." - Martin Luther King Jr.

The ExCeL exhibition and conference centre which will host the G20 summit.. 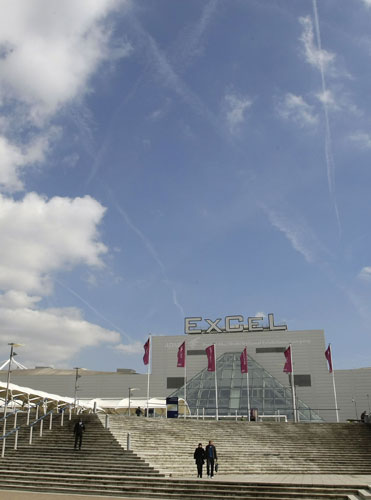 The City prepares for this week's G20 protests

Here's a funny one..

The Beatles Rock Band short film:
http://www.youtube.com/watch?v=FjfAXCKLcfk
"Nothing in all the world is more dangerous than sincere ignorance and conscientious stupidity." - Martin Luther King Jr. 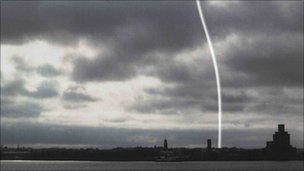 A large spinning column of cloud higher than Blackpool Tower will appear over the Wirral estuary as part of the 2012 Olympic Games celebrations.

Column is a public artwork created by artist Anthony McCall for the 2012 Cultural Olympiad.

The pillar of steam will rise above the Wirral waterfront on the Mersey, directly opposite Liverpool's World Heritage Site at the Pier Head.

On clear days the cloud will be visible from up to 60 miles away.

The £500,000 large column of corkscrewing steam, commissioned by Arts Council England, will be generated by using recycled heat.

It will first be seen on New Year's Eve 2011 and then remain throughout 2012.
'Cavernous estuary sky'

Twenty metres in diameter, the cloud's visibility and structure will be dependent upon weather conditions. Humidity and wind speed will change how the cloud looks.

Anthony McCall said he chose the site on the River Mersey for several reasons - "Wirral Waters' cavernous estuary sky, constantly shifting weather, and its available docks already makes it a compelling location for Column," he said.

"The fact that Merseyside also stands as a focal point for the whole North West, makes it absolutely ideal."

The work is one of 12 public art commissions across the UK for the London 2012 Cultural Olympiad, it was chosen in October 2009 from a total of 172 regional entries.

"Anthony McCall's work is in demand by museums and galleries across the world and we are delighted that he has come up with such an outstanding and dramatic concept for our programme," she said.

A six foot scale model of the Wirral column of steam can be seen at a showcase of Anthony McCall's work in the Vertical Works exhibition at the University of Westminster from 1 to 27 March, 2011.

Return to Scalar and HAARP