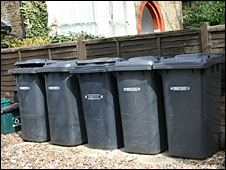 We are with ya brother.

Cheers Joe, I knew we could count on your support.

I know SMiles, it won't stop wars, it's just one small skirmish in the bigger battle.

'I'm waiting for riots in the streets'

Wow Seamus, wars over garbage. Thats a high level of insanity. And instead of recycling and lowering the waste output and composting they flog each others bins and attack garbologists... what a bunch of freaks.

In normally staid Cannock, meanwhile, the Birmingham Post relates that decent, law-abiding family men, unable to cope now the council has switched to fortnightly collections, have been seen stealing into their neighbours' gardens at dead of night and nicking their wheelie bins. "It's like something out of Mad Max," says resident Paul Nicholls. "Every man for himself, scavenging for an extra bin."

Mad Max my arse. Has he ever seen Mad Max?

You mob deserve a 200% wage rise if you have to deal with idiots like that, on top of the idiots on council...

Is there an online petition or anything, if not me and the missus are both with you lot, for what its worth. We might be on the other side of the world but us working people have to stick together.

We know which side we're on.

A quick search found no petitions. Here are the unions involved.. Unison, T&G, and GMB. Rumours are of a week long strike in september or october, I'll keep you posted and you can always comment on the Daily Mail Blogs. They'll have lots to say before then.

"Mad Max", yeah we do tend to exagerate but he'd probably forgotten Trainspotting, and that "waiting for riots" is a laugh a minute (if you're a slow reader), and a fairly accurate account of life on the streets here. It's certainly the most "interesting" job I've ever had. What with the daily goings on and the old-timers tales I could write a book about it. If I could write.

Anyway, only another twenty years before I get my pension.

You'll always be a handsome S.O'B.
"O Oysters," said the Carpenter,
"You've had a pleasant run!
Shall we be trotting home again?'
But answer came there none--
And this was scarcely odd, because
They'd eaten every one.

You'll always be a handsome S.O'B.

Trust you to get that

My parents spoke Twilight Language around the house, so it was only natural that us kids picked it up.
"O Oysters," said the Carpenter,
"You've had a pleasant run!
Shall we be trotting home again?'
But answer came there none--
And this was scarcely odd, because
They'd eaten every one.

How weird does it get?

If only my knees were as strong..

Hey Seamus, how is that legal?

I don't know how or why it's legal but the unions are not challenging it on that basis, just appealing individual cases after the fact..

The councils have been very crafty with this, careful as usual to hit one minority while rewarding others, region by region to avoid a national backlash..

Pure coincidence that in every region it hits the same category of workers? ie those ripe for privatisation.

Though this may provide some brief local respite, I'm still holding out for that letter. Just to frame it.

Return to Members' Notice Board