That's about all I've got. Updates online.

My local paper had only one line of print relating this news. Not seeing this topic already covered here so many hours after the event, I presented the headline and offered the best advice I had, "Updates online."

Your criticism would have been better appreciated if you posted any article furthering our knowledge listed in your search results, Elvis. Here's my paper's updated version; be sure to check out the two photos of Sirhan at the link, 82:

SACRAMENTO, Calif. (AP) — Sirhan Sirhan, imprisoned for more than 50 years for the 1968 assassination of Sen. Robert F. Kennedy, was hospitalized Friday after being stabbed by a fellow inmate at a San Diego prison.

A statement from the state Department of Corrections and Rehabilitation said the stabbing occurred Friday afternoon at the Richard J. Donovan Correctional Facility near San Diego.

"Officers responded quickly, and found an inmate with stab wound injuries. He was transported to an outside hospital for medical care, and is currently in stable condition," the statement said.

The statement did not name Sirhan, but a government source with direct knowledge confirmed to The Associated Press that he was the victim. The source spoke under condition of anonymity, citing prison privacy regulations.

The stabbing was first reported by TMZ.

Corrections officials reported that the alleged attacker has been identified and has been segregated from the rest of the prison population pending an investigation.

Sirhan, 75, was convicted of shooting Kennedy shortly after midnight on June 5, 1968, immediately after the New York senator had declared victory in the previous day's California Democratic presidential primary.

Kennedy had just finished delivering his victory speech to cheering supporters at Los Angeles' Ambassador Hotel when he decided to walk through the hotel kitchen. He had stopped to shake hands with a busboy who had delivered food to his room the day before when he was shot in the head. He died the next day.

Sirhan was originally sentenced to death. But when California briefly outlawed capital punishment, his sentence was reduced to life in prison. He has been denied parole several times.

Five bystanders were wounded during the shooting. In the chaos, Los Angeles Rams football great Rosey Grier, Olympic champion Rafer Johnson and others wrestled the murder weapon away.

Over the years, Sirhan has claimed to have no recollection of the shooting or his initial confession.

As a high-profile prisoner, Sirhan had once been kept in a protective housing unit at Corcoran State Prison in Northern California. After he told authorities several years ago that he would prefer being housed with the general prison population, he was moved to the Richard J. Donovan Correctional Facility.

As a high-profile prisoner, Sirhan had once been kept in a protective housing unit at Corcoran State Prison in Northern California. After he told authorities several years ago that he would prefer being housed with the general prison population, he was moved ...

Undoubtedly a failed suicide attempt, since he was no longer under protection from himself.

Seriously though, it's sad, violence done on a person whose life & future were destroyed 50 years ago. (No wonder he looks enraged in the two pictures.)
The greatest sin is to be unconscious. ~ Carl Jung

It was AP's choice to further the psyop by publishing two photos of Sirhan looking angry, as there are plenty of him reflecting an absence of anger or even smiling.

^^^Good point; wouldn't want the public(or potential parole board members at his next hearing) to see a dangerous scapegoat killer looking honest or reflective. 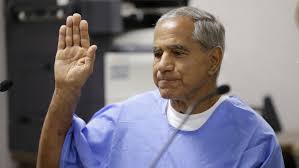 So, James "Whitey" Bulger , Jeffrey Epstein, and now Sirhan Sirhan... interesting...n0?
If Barthes can forgive me, “What the public wants is the image of passion Justice, not passion Justice itself.”

True...
Cesar is dead 13 days after Sirhan Sirhan was stabbed in prison. 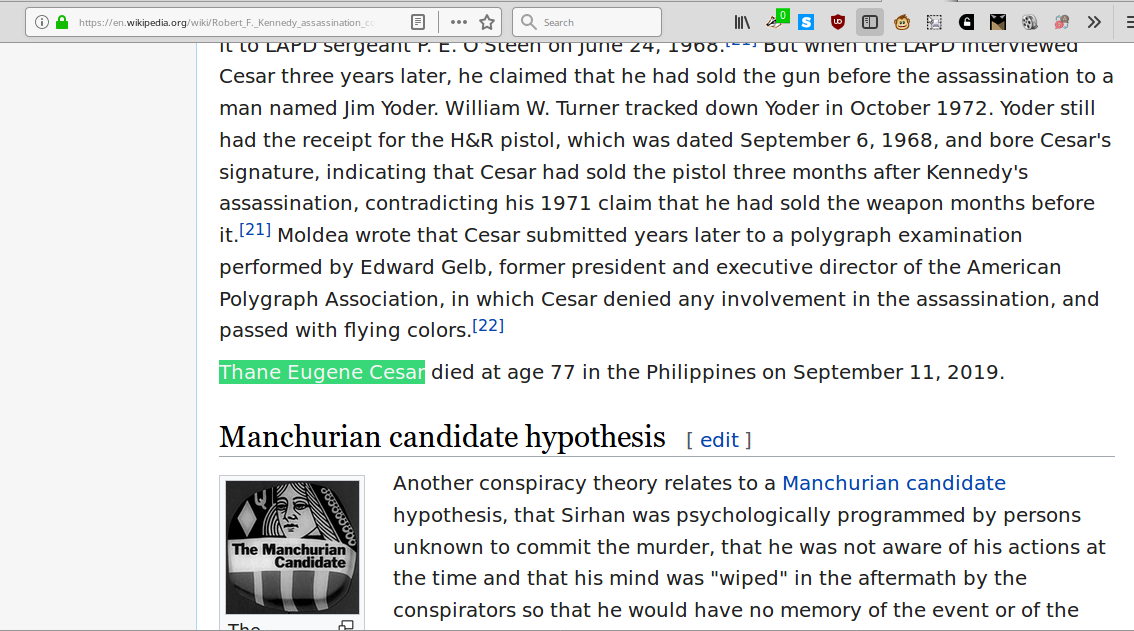 https://en.wikipedia.org/wiki/Robert_F._Kennedy_assassination_conspiracy_theories
https://www.newsweek.com/robert-f-kennedys-jr-thinks-sirhan-did-not-act-alone-fathers-assassination-946078
If Barthes can forgive me, “What the public wants is the image of passion Justice, not passion Justice itself.”

robertfkennedyjr's profile picture
robertfkennedyjr
Verified
Thane Eugene Cesar died today in the Philippines. Compelling evidence suggests that Cesar murdered my father. On June 5, 1968, Cesar, an employee in a classified section of Lockheed’s Burbank facility, was moonlighting as a security guard at the Ambassador Hotel. He had landed the job about one week earlier. Cesar waited in the pantry as my father spoke in the ballroom, then grabbed my father by the elbow and guided him toward Sirhan. With 77 people in the pantry, every eyewitness said Sirhan was always in front on my father at a 3-6 feet distance. Sirhan fired two shots toward my father before he was tackled. From under the dog pile, Sirhan emptied his 8 chamber revolver firing 6 more shots in the opposite direction 5 of them striking bystanders and one going wild . By his own account, Cesar was directly behind my dad holding his right elbow with his own gun drawn when my dad fell backwards on top of him. Cesar repeatedly changed his story about exactly when he drew his weapon. According to the Coroner, Dr. Thomas Noguchi, all 4 shots that struck my father were “contact” shots fired from behind my dad with the barrel touching or nearly touching his body. As my dad fell,he reached back and tore off Cesar’s clip on tie. Cesar sold his .22 to a co-worker weeks after the assassination warning him that it had been used in a crime. Cesar lied to police claiming that he'd disposed of the gun months before the assassination. Cesar was a bigot who hated the Kennedys for their advocacy of Civil Rights for blacks. I had plans to meet Thane Eugene Cesar in the Philippines last June until he demanded a payment of $25,000 through his agent Dan Moldea. Ironically, Moldea penned a meticulous and compelling indictment of Cesar in a 1995 book and then suddenly exculpated him by fiat in a bizarre and nonsensical final chapter. Police have never seriously investigated Cesar's role in my father’s killing.

Users browsing this forum: No registered users and 4 guests