How the Syrian American Medical Society Is Selling Regime Change and Driving the U.S. to War

Arguing over who is dying from what weapon is foolishness. Stop the fucking killing,

get ready trump giving a speech in a couple minutes

god help us all

it would be an illegal strike ....but something being illegal never stopped him before
Mazars and Deutsche Bank could have ended this nightmare before it started.
They could still get him out of office.
But instead, they want mass death.
Don’t forget that.

Air strikes with France and Britian
Mazars and Deutsche Bank could have ended this nightmare before it started.
They could still get him out of office.
But instead, they want mass death.
Don’t forget that.

Oh! Yeah, Bolton. How could I forget BB Bolton?

I picked a great day to be flying...Other side of the globe but still...It remains to be seen what Russia's response will be although I noticed that quite a few commenters at Moon of Alabama even suggested that Russia will ultimately roll over and take it...The maintenanceof worldwide capitalism is infinitely mor important than some Syrian children. The oligarchs have to lick their wounds over sanctions and repatriate their cash...

2/ While directly addressing Putin, Mr. Trump said the following: "The United States has a *lot* to offer, [Mr. Putin], with the greatest and most powerful economy in the world..."
3/ Based on Trump's past off-teleprompter moments, it appears his expression of hope that we'd get along with Russia was off-script. In the past I've compared transcripts with Trump's actual words and he hit *every tell* that he was off-script.

This man is *terrified* of Putin.

Especially with all the recent revelations, this rings totally true...He really had no choice but to let Deep State yank his nose ring on this, but he could be in for some cold revenge on the part of Putin...
"a poiminint tidal wave in a notion of dynamite" 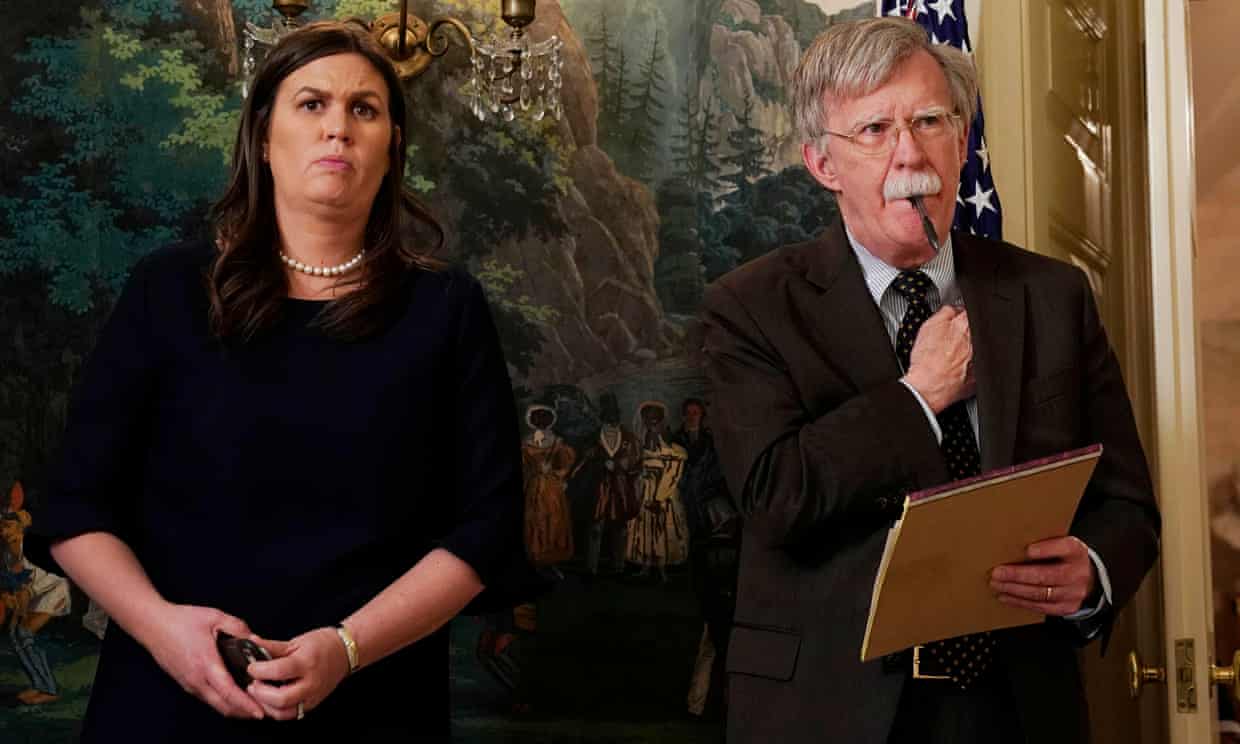 So now we wait and see the Russian response, the Kremlin had earlier stated “We are being threatened, we warned that such actions will not be left without consequences. All responsibility for them rests with Washington, London and Paris.”. https://nypost.com/2018/04/13/russia-wa%20...%20ia-attack/

Syria intercepted many of 100+ missiles launched at its civilian, military objects – Russia

The majority of rockets fired in Syria by the UK, US, and France were intercepted by Syrian air defense systems, the Russian Defense Ministry said. Russian air defense units were not involved in repelling the attack.

The warplanes and vessels of the US and its allies launched over 100 cruise missiles and air-surface missiles on Syrian civil and military facilities, the ministry stated.

The strikes were conducted by two US ships stationed in the Red Sea, with tactical air support from the Mediterranean and Rockwell B-1 Lancer bombers from Al-Tanf coalition airbase in Syria’s Homs province, according to the statement.

Russia did not deploy its air defense systems located in Syria to intercept the American, British, and French missiles.

Earlier, the ministry issued a statement saying that none of the missiles launched by the US and its allies reached the Russian air defense zones that shield facilities in the port city of Tartus and Khmeimim Air Base.

Responding to the US-led airstrikes on Damascus, UN Secretary-General Antonio Guterres said that all countries are obliged to “act consistently” with the UN Charter. “There’s an obligation, particularly when dealing with the matters of peace and security, to act consistently with the Charter of the United Nationals and with international law in general.”

A message re: Syria from someone who actually has skin in the game (directed at... well... you'll know who).

Don’t fucking pretend you know what we’re going through.

I’ve seen too many people I respect suddenly think they know what happened and is happening in Syria.

You never supported innocents there until it became trendy.

So shut the fuck up.

I had a call with my aunt in Syria last week. She couldn’t attend my wedding. I was crying during the entire conversation, not just because she couldn’t come but because I don’t know if I’ll ever see my relatives there again.

Don’t stand on your bullshit pedestals.

Listen to the damn people - both here and abroad - who have had to deal with a ruthless piece of shit in Syria, and now simple pawns between petulant assholes.

I’m the one in the middle.

If you want to fucking do something, put your money where your mouth is and make a donation to help the orphaned babies.

But if you’re just going to shoot off a few tweets, write an article, say some stupid shit as a non-Syrian and call it a night...

This isn’t another Iraq. This is a goddamn different nation.

Oh and by the way. The US right now bombing the centers of violence? Yeah, a few days ago, Syria’s ruthless dictator used those spaces to launch deadly gas attacks.

Syria has been dying for years. So don’t pretend you’re on the moral high ground. It’s messier than you know.

Congratulations Jerky, you have found yet another delivery method for unrestrained vulgarity.

WHO said that there 500 poisoning victims, they got the number from the White Helmets, local hospital says nobody came in for poisoning symptoms.

Who ya gonna believe?
All these things will continue as long as coercion remains a central element of our mentality.

Have you donated yet? I'll be doing so on the 27th. I don't have much, but I have enough to give $50 to help feed and clothe orphaned kids in a war zone.*

Now, as for what you've posted... I haven't even looked into your no doubt bogus claim that the "local hospital" said "nobody came in for poisoning symptoms", but I can only imagine the size of the death wish an "official" Syrian hospital administrator would have to be harboring before he would unilaterally decide to confirm "Western war propaganda" that paints the Assad regime in a negative light.

Had you even thought of that?

Sounder » 14 Apr 2018 08:04 wrote:Congratulations Jerky, you have found yet another delivery method for unrestrained vulgarity.

WHO said that there 500 poisoning victims, they got the number from the White Helmets, local hospital says nobody came in for poisoning symptoms.

Who ya gonna believe?

* Tax receipt will be made available to any doubting Thomases.

Kind of more have a rant how much when it comes to war, both MSNBC and Fox are one in the same. Boy, as much as the mainstream "liberal" media ala MSNBC, NBC, CNN, DailyBeast, etc hates Trump and the GOP, if there is ONE THING that instantly unites Brian Williams and Rachel Maddow and Wolf Blitzer in a neural netlink with Sean Hannity, Rush and Laura Ingram its with the mere stench of American war. Even Chucky Schumer and Pelosi tonite are lockstep with Lindsay Graham and Bolton with this salacious love of American military might.
Ironic that seemingly only the progressive left and the grotesque puss filled alt right/far right/conspiracy right seem to have a disdain for war(tho for obvious reasons...the left hates war because its mil indust complex projection of horror on innocents, the far right hates war because they see it as "the Joos" globalists) Regardless, even if this is just a one off pin prick distraction from pee-tape porno FBI shit swirling around Donnie J Ray-gun, boy we're in weird fucking times. When Alex Jones is throwing chairs and swearing up a storm on live tv calling Trump a sell out traitor globalist...hoo boy. Buckle up.

Then again, werent we told a hot war involving Saudi Arabia/Israel/US/UK against Iran/Syria/Lebanon in this shia vs sunni war to be expected? Just didnt realize the 50s/60s cold war fantasy of US vs Russia could be on the line(yes its ironic Trump is suddently projecting anger against Putin and Russia while hes being accused of being a Russian Agent) But yeah expect things to get really fucking fun house mirror weird by the summer and fall. Wait where does China and North Korea fit it? And how will a "WW3" effect Trump buddy Elon Musk's plan to create a cult colony on Mars

"Do you know who I am? I am the arm, and I sound like this..."-man from another place, twin peaks fire walk with me

Users browsing this forum: No registered users and 16 guests