It’s a funny old world…....whilst California's Drought Could Be the Worst in 500 Years a relentless Atlantic weather system deposits ever more rainfall into a totally saturated UK hydrological system – encroaching ever nearer to her Maj herself ensconced in her castle of darkness ....hence a sudden burst of army & navy personnel with sandbags near Windsor as the river level swells over the banks.... Flooding nearby: Swans swim in sight of Windsor Castle where the river Thames has burst its banks in an area known as The Brocas in Eton, Berkshire

...and also effecting nearby Shepperton...... From above: Aerial view showing flooding covering Shepperton, Surrey. The Thames has hit record levels causing extensive flooding to parts of the South-East

...which is sort of resonant as Shepperton's most notable resident was JG Ballard - author of the 60's new wave sci-fi novel The Drowned World about survivors in a post apocalyptic submerged London… Set in the year 2145 in a post-apocalyptic and unrecognisable London, 'The Drowned World' is a setting of tropical temperatures, flooding and accelerated evolution. Ballard's story follows the biologist Dr Robert Kerans and his struggles against the devolutionary impulses of the environment.

Will Self on JG Ballard's 'The Drowned World'

JG Ballard’s recently reissued masterpiece, 'The Drowned World', shows him to be the most important British writer of the late 20th century, says Will Self.

London has been flooded many times. Until the late 19th century, and the construction of the Thames embankments as part of Joseph Bazalgette’s grand sewerage works, the high-water mark of the tidal river was an arbitrary dividing line between liquid and solid. All along the river’s banks there was a fretwork of jetties and inlets, and when the waters rose too high they would inundate the streets.

Even after the embanking, in 1928, a flood breached the parapets in Westminster and surged into the impoverished streets around Millbank, drowning 14 people. During the great North Sea floods of 1953, London was relatively unscathed – although in the East End, Canning Town went under the waters, while still further downriver Canvey Island was entirely inundated, with the loss of 58 lives. This event led directly to the construction of the present Thames Barrier, the centrepiece of which is a series of silver-cowled sluice gates ranging across the river between Silvertown and Charlton; structures that resemble – for all their obvious utility – sections of the Sydney Opera House, disarticulated and marooned on the riverbed.

The barrier was completed in the early Eighties, and since then has been employed with greater and greater frequency as combinations of storm surges and high equinoctial tides have threatened the city. Many believe these historically high water levels are a result of global warming, a climatologic phenomenon widely thought to be caused by human activity, specifically the release of so-called greenhouse gases since the Industrial Revolution. But whatever the new, physical threat to London, the city has felt itself to be psychically vulnerable for centuries.

In his Extraordinary Popular Delusions and the Madness of Crowds, published in 1841, Charles Mackay recounted the great panic of 1524. This followed the prophecies of numerous soothsayers and astrologers in the previous year, who all concurred that “on the first day of February… the waters of the Thames would swell to such a height as to overflow the whole city of London, and wash away ten thousand houses”.

According to Mackay the panic was both widespread and no respecter of class: “By the middle of January at least 20,000 persons had quitted the doomed city, leaving nothing but the bare walls of their homes to be swept away by the impending floods.” Among them was the prior of St Bartholomew’s, who “erected, at a very great expense, a sort of fortress at Harrow-on-the-Hill which he stocked with provisions for two months”.

In the event, of course, the deluge failed to materialise, and the shamefaced Londoners returned to the city, their anxiety converted into a rage that they would have vented on the erring Cassandras, were it not that “they asserted that, by an error (a very slight one) of a little figure, they had fixed the date of this awful inundation a whole century too early”. The inaccurate foretelling of the great flood was surely only a correlate of popular fears about the growth of the city itself: since the medieval period, London’s burgeoning size has been a cause of anxiety, uneasiness reflected in its purulent sobriquet “The Great Wen”.

The biblical root of this desire to sluice the streets of their infective inhabitants and so purify the city is obvious. In fiction, the inclination to flood London has remained perennial, reaching its modern apogee during the upsurge of scientific romances published in the last decades of the 19th century.

Richard Jefferies’s After London (1885) is a post-apocalyptic novel that foresees an England returned to a medieval level of social organisation and technological sophistication. The centre of the country is covered by a great lake, and the novel’s wayward protagonist, Felix, ventures over these waters and then into the miasmic swamps which now cover London. “During his advance into this region in the canoe he had in fact become slowly stupefied by the poisonous vapour he had inhaled. His mind was partly in abeyance; it acted, but only after some time had elapsed. He now at last began to realise his position; the finding of the heap of blackened money touched a chord of memory. These skeletons were the miserable relics of men who had ventured, in search of ancient treasures, into the deadly marshes over the sight of the mightiest city of former days. The deserted and utterly extinct city of London was under his feet.” ..cont...

The Drowned World by JG Ballard

Hey Semper, I live near Hampton station and I'm starting to get nervous. The white arrow is where I am.

....seems like its taken this long for the water to percolate all the way through the pipework of the system and end up downstream in the Thames......same with the Severn in Worcester by the look of it.... 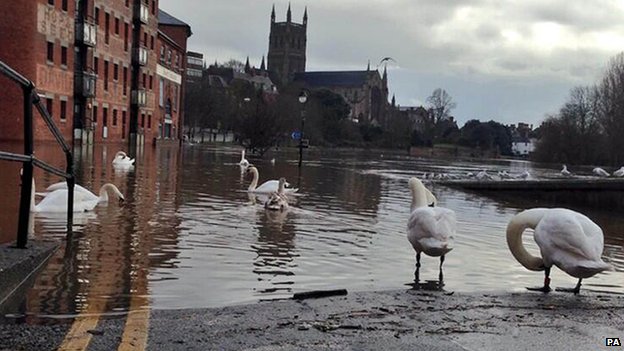 Swans wander down a flooded street in Worcester

.....can't imagine anything more soul destroying than being knee deep in river water in your own house.....my gaff is quite near the River Crane which is basically the municipal canal that takes run-off water from Heathrow down to the Thames - the river's tidal so if a high tide meets a load of water coming the other way then it could be.... 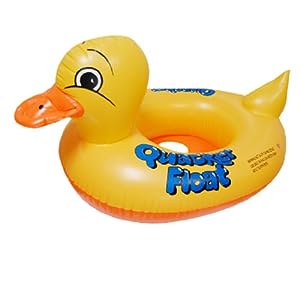 Ha, small world eh, Semper? I lived in Fulwell Pk Ave as a kid and spent my entire life in Crane Park.

......I did vaguely wonder about buying a house-boat when I moved out of a second floor flat......both those options are looking quite good at the moment...

...still looking on the bright side :

"I think you can rule out hosepipe bans for 2014," says Prof Arnell.

Hey guys, this is like a reunion! I live about 100 ft from the Crane River, in a... bungalow behind the Quins rugby ground

I love the Crane Park. Here's one I prepared earlier

Searcher08 wrote:Hey guys, this is like a reunion! I live about 100 ft from the Crane River, in a... bungalow behind the Quins rugby ground

I stand in awe amid the strange properties of the River Crane and it's ability to guide us here. My son works at Quins.

Semper, I have a very bad feeling about this. I hope it's just my normal pessimism.

Wraysbury is the 'last stop' before greater London. It seems to me that the water flowing down the Thames Valley naturally congregates around the Wraysbury/Staines area before siphoning into the Thames. The high density of reservoirs in the area shows how high the water flow into this area is. I find it worrying that parts of Twickenham are only 12m above sea level, Teddington 11m, Hampton Wick 9m, Ashford 14m, Kingston 12m etc etc, according to Google Earth.

The lowest elevation that I can find above sea level in Wraysbury is 16m. Some parts already flooded are at 18m. It would appear, that in effect, there is some kind of natural 'dam' for the water table at Wraysbury/Staines. If the Wraysbury/Staines area continues to 'fill' (and news reports suggest it is still rising) - at what point does the 'dam' break and flood everything in it's path below the 18 or even 19m mark already reached in Wraysbury?

My bags are packed.

sensible really......I'm in denial.....or in 'da Nile.....about the whole thing........yes those sea-levels look pretty scary....if you extrapolate the last few weeks indefinitley then the whole of London's probably fucked.......to an extent its already happened ( see below re Teddington etc ) but clearly despite that unfortunate ( and long standing ) fact of geography the floods do seem historically to be contained and localised so is this time "really different" or unprecedented…it’s a meterological experiment I wish we weren’t all guinea pigs in….......

The towns of Maidenhead, Windsor and Eton and nearby villages have a very long history of flooding from the river Thames.

leading to the Flood Relief Scheme, now known as the Jubilee River

...I used to have work colleagues in an office on Staines river side that was always being pumped out

The risk of flooding continues as the water levels on the River Thames are expected to rise further.

The Environment Agency’s flood alert for the riverside area between Hampton and Thames Ditton to Teddington, including Hampton Wick and Kingston, remains in place.

The river has spilled into the floodplain in many areas along the river and Broom Road in Teddington is badly flooded, with people advised not to drive through the water.
The flood warning also remains in place for properties in Hampton and Hampton Wick, including Barge Walk, Hampton Court Palace Golf Club and Hampton Court Road.

And this - Richmond back on 31 Jan

I still note that my postcode hasn't had a warning since 2008 by the look of it - which I lived through in blissful ignorance....I doubt I will again after this

I've gone into full-on preparation mode since yesterday, I realised my pics were trying to tell me something.... Staines has flooded and it is just a couple of miles up the Thames.
"I may be some time..."

I have very little doubt that anyone who found this thread interesting, will find this video both incredibly informative, and extremely relevant. Catch it soon.

Just a few of the questions you might find yourselves asking afterwards.

If you saw the amount of rain we've been having since last Autumn then it's not too hard to see the cause of the flooding.

..oh I think we all know what’s responsible for this situation, but only a few of us are brave enough to actually come out with it…..


….actually what really pisses me off about this is that now I’ll never be able to laugh condesecndingly at the American nutters again…

Users browsing this forum: No registered users and 26 guests