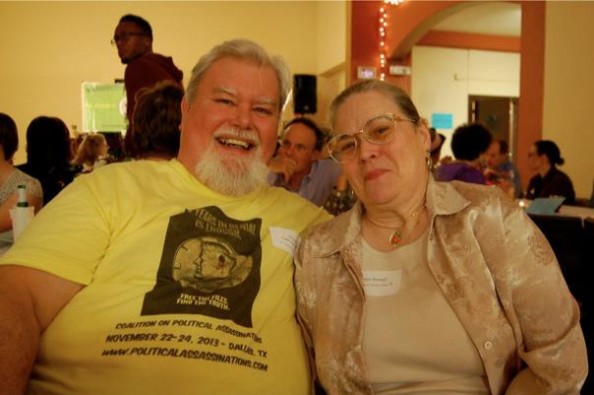 Our beloved friend John Judge suffered a stroke last week and is currently in recovery. We're fundraising to help pay for John's recovery and also to help pay his rent and other things while he is unable to work.

John has been a lifelong friend to many and has been on the forefront of political investigation for some five decades, but he has worked with veterans since the Vietnam War as well as doing work volunteering with suicide hotlines, battered women's shelters, and just generally trying to help somebody every day of his life. Whatever anyone can do will be appreciated.

I reckon that in a sane world, John Judge would simply not be under the current financial pressure he's experiencing.
Dec 19th 2012. What’s your own Gut feeling?

And the terrible news just keeps on coming....

It is with great sadness that we announce that John Judge, COPA director, passed away yesterday in Washington D.C.

More details will follow soon, but John had been recovering from a stroke he suffered a number of weeks back.

John was a good friend and a tireless advocate for justice in all he did. He will be terribly missed.

We will keep you informed of memorial services when we know more.

It is with great sadness that we announce that John Judge, COPA director, passed away yesterday in Washington D.C.

More details will follow soon, but John had been recovering from a stroke he suffered a number of weeks back.

John was a good friend and a tireless advocate for justice in all he did. He will be terribly missed.

We will keep you informed of memorial services when we know more.

Whereas Ruppert was more or less an ambiguous, divisive figure, I don't think we're going to get many "The Dark Side of John Judge" postings...

Terrible loss.
-I don't like hoodlums.
-That's just a word, Marlowe. We have that kind of world. Two wars gave it to us and we are going to keep it.

...depends if Dave Emory happens to pass through...

I am sorry to hear of the death of John Judge. He was one of my heroes. But he left a legacy of great research together with his tireless efforts to seek the truth, especially with regard to the death of JFK.

There goes the judge.

They go from ill to died too quick fer me.

John Judge was a great man, a true humanitarian, RIP and thank-you John for helping to save authentic memories.

I hadn't really known his work, this may be of interest...
By 1964 there were 1.5 million mobile phone users in the US

This is sad. On a political level the world certainly needs a lot more John Judges, not fewer. He was an all-facts researcher with leftist politics, and he was instrumental in the group "9/11 Citizens Watch," which he founded with Kyle Hence and Catherine Austin-Fitts, and which held the first national press conference about 9/11 truth theories. I worked with John on related projects, and he had a fatherly energy about him. He was always broke, and I have a mental image of him kicking his car when it broke down on a sub-zero temperature day in D.C. He rocked a speaking gig at Hampshire College that I attended four or five years ago, and he was a darling of the western Massachusetts community radio station. He represented an old-school... RIP, John.

The Washington Post, after ignoring or badmouthing the late John Judge for half a century, has belatedly accorded him a bit of the respect John so richly deserves.

As Jews say, may John's memory be for a blessing “I tell people you can call me a conspiracy theorist if you call everyone else a coincidence theorist,” Mr. Judge, who died at 66, once remarked.

John P. Judge, an independent researcher who tirelessly amassed and disseminated evidence supporting alternative explanations — some called them conspiracy theories — for President John F. Kennedy’s assassination, the 9/11 terrorist attacks and other historic events, died April 15 at a nursing facility in the District. He was 66.

Through years of investigation and activism, Mr. Judge developed a devoted following in the community of skeptics who question official or commonly accepted narratives of the past. He co-founded and directed the Coalition on Political Assassinations, an organization whose activities include investigating the deaths in the 1960s of John Kennedy, his brother Robert F. Kennedy, civil rights leader Martin Luther King Jr. and black nationalist leader Malcolm X. News outlets, with some frequency, featured Mr. Judge and his work.

He turned his Washington home into a repository of thousands of volumes and documents on political assassinations and other matters, supporting himself over the decades through odd jobs and fundraising work. He was once described as a “professional conspiracist,” but he considered himself an “alternate historian,” according to his Web site, judgeforyourself.org.

“I tell people you can call me a conspiracy theorist if you call everyone else a coincidence theorist,” Mr. Judge quipped to the publication National Journal.

His most noted work involved President Kennedy’s death in Dallas on Nov. 22, 1963. Like legions of others doubters labeled conspiracy theorists, Mr. Judge rejected the Warren Commission’s finding that Lee Harvey Oswald had been the lone gunman.

Mr. Judge’s working theory, he told interviewers, was that the assassination had been organized by the Joint Chiefs of Staff. “I don’t think this is an insoluble parlor mystery,” he once told the Dallas Morning News. “I don’t think we are just flailing in the dark.”

Mr. Judge helped organize in Dallas annual commemorations of Kennedy’s death. He and others gathered on the grassy knoll, the spot where another gunman, according to some theories, was stationed. Those memorials became the subject of controversy last year, when Dallas marked the 50th anniversary of Kennedy’s death.

After contentious discussions with event organizers, the Coalition on Political Assassinations agreed to hold its ceremony in a parking lot several blocks away from the usual spot, which was restricted to ticket-holding participants.

“We’ll be here,” Mr. Judge had said. “We may have to crawl through the sewer system and pop our heads up where the assassin was, but we’ll be here.”

In his work regarding more recent history, Mr. Judge cofounded the 9/11 Citizens Watch to monitor the operations of the official 9/11 Commission, the independent and bipartisan body created by congressional legislation to prepare a full account of the attacks.

He briefly worked as an assistant to then-U.S. Rep. Cynthia McKinney (D-Ga.), who was widely rebuked when she suggested that President George W. Bush’s administration might have had advance notice of the terrorist strike.

Former congressman Dennis J. Kucinich (D-Ohio), who met Mr. Judge during his Capitol Hill employment, described him as “brilliant” and said he had been “very impressed” by Mr. Judge’s research abilities.

“I may not have agreed with him on everything,” Kucinich said of Mr. Judge in an interview, but he was “an original, independent thinker and someone who immersed himself in hidden history.”

At the time of his death, Mr. Judge was working toward the establishment in Washington of the Museum of Hidden History, which would include an archive and library. Among other missions, according to its Web site, it would “inform and educate the public about little-known aspects of local, national and international history.”

“It erodes the rational approach when you talk of conspiracies involving a small cabal in a board room controlling world history,” Mr. Judge once told the Boston Globe. “But it’s a common human trait to want an explanation for all the unexplained things that are happening — some kind of grand unified theory.”

John Patrick Judge was born Dec. 14, 1947, in the District, and he grew up in Falls Church, Va. Both his parents worked at the Pentagon.

Mr. Judge graduated in 1970 from the University of Dayton in Ohio, where he studied theology and where he recalled being obliged to participate in the Reserve Officers’ Training Corps. He later joined the American Friends Service Committee as a draft counselor during the Vietnam War.

In the District, Mr. Judge became what the Washington City Paper described as “the voice of military dissent in D.C. public schools.” He sought to counter military recruiting efforts by attending career days and informing students of what he alleged were discrimination and deprivation of rights within the military.

Mr. Judge’s survivors include his companion of four years, Marilyn Tenenoff of York Haven, Pa. She said that Mr. Judge had a stroke in March but that the cause of death had not been determined. The D.C. medical examiner’s office had not ruled on the case, according to a spokesman.

Tenenoff said she plans to request an outside review of the autopsy report, when it is available, to assuage the concerns of anyone who may doubt its accuracy. Films: John Judge in 1994: "The Hidden History of the United States: Who Really Runs America? - Part One" from The Eclectic Point of View (1:59:39). After a brief intermission, we will show the short (38:23) “Closing Remarks” by John Judge to the 50th Anniversary Conference on President Kennedy's Murder , which was presented on November 24, 2013 in Dallas, Texas. The theme was “Fifty Years in Denial is Enough: Free the Files! Find the Truth!” John Judge was the Director of the Coalition on Political Assassinations and one of the founders of 9/11 Citizens Watch.

Friday, May 23 at 7 pm “Remembering Michael Ruppert”. Featuring the film titled "THE GREAT AWAKENING" (1:17:43) - The Great Awakening Speech empowers and invites humanity to change the way it thinks and perceives reality. On 9-11-2011 Mike Ruppert, the 'tracker of truth' , spoke in Seattle. He evoked a powerful, inspiring, selfless message of incorruptible truth and awareness; shining a bright light in an age of darkness and deceit. He said that the generation under 30 years old is the generation most screwed by the system in place because it has no concern for the future, only current bottom-line corporate profits and the corporate privatization of all commonwealth inheritance world resources. He promotes Collapse Net, the Zeitgeist movement, Transition Towns, and those working on alternative banking systems. He talks about the ongoing nuclear disaster in Fukushima, Japan.

The Northern California 9/11 Truth Alliance meets on the “First & Third Thursdays” in the Fireside Room, 1606 Bonita Ave, next to Fellowship Hall. Mark your calendar for May 1 & 15 at 7 pm.
http://www.sf911truth.org

Social Justice Committee meetings are on the “First & Third Sundays” normally at 12:30 pm in the Fireside Room in the RE Building on 1606 Bonita Ave. Mark your calendar for SJC meetings May 4 & 18.
http://www.bfuu.org/events/social-justice

Join us for BFUU Sunday Service at 10:30 am in the Fellowship Hall Sanctuary!

SOCIAL JUSTICE IN THE HEART OF BERKELEY
https://www.youtube.com/bfuusocialjustice/playlists

Users browsing this forum: No registered users and 29 guests