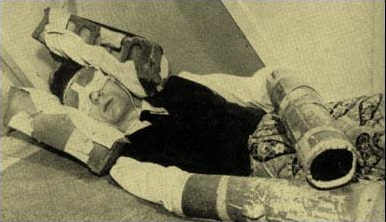 Again, how do we know this is Leonard Cohen in the picture?
If I knew all mysteries and all knowledge, and have not charity, I am nothing. St. Paul
I hang onto my prejudices, they are the testicles of my mind. Eric Hoffer

I feel there's more to that scene than "meet my little friend" but I didnt see the movie. Why would I see that movie? Both are archetypes. The Schwartzeneggar figure is the Future - i got that much.

Maybe it was Robert Phoenix who brought up sox. Thanks for not asking. I repressed it for the same reason I had to delete that comment. So you'll have to take my word for it: that it could be important but cant be talked about. Fame takes men and weaponizes them.
"We come from France"

Again, how do we know this is Leonard Cohen in the picture?

We don't know. Most records of these experiments have been hidden or destroyed. In 1951 LC was 17, a minor. So this falls into the cayegory of "experiments on children." A violation of the Geneva Convention.

It looks like him. I've shown it to people and asked them to ID the man, and they give the same answer. Given the blindfold, he probably was unaware he was being photographed. Photos like this have been used for blackmail.

IN 2009 a Montreal filmmaker found this on the web. It.was captioned "1951 HEBB EXPERIMENT, MCGILL". Despite heading the Debating Society and winning a poetry award, Leonard didnt do very well at McGill - typical of students who volunteered for Hebb's experiments and suffer from lifelong anxiety and depression. Leonard Cohen famously suffers from both.

In the 1990s or early 2000s he told his agent KELLEY LYNCH and her mother over Greek food and a bottle of ouzo that he was in the MKULTRA program. Kelley's mother has written an affidavit to that effect. Note that Kelley's father was US Air Force - linked to MKULTRA.

THE MKULTRA PROGRAM RAN AT MCGILL FROM 1953 - 1964. THE HEBB SENSORY ISOLATION EXPERIMENTS WERE A MAJOR PART OF THAT PROGRAM. Research enabled by the CIA often involved experiments on children and brought McGill international recognition in psychiatry and neuroscience

Again, how do we know this is Leonard Cohen in the picture?

Listen to the interview with AnnDiamond.


Also check out Ann Diamond's blog.
Typhon: A History of the Holocene Period

How do we know?

Because he told us. Because he knows his secrets are safe with us.
"We come from France"

So again, we don't know it is Leonard Cohen at all. AD herself has said so, and just did again. So I think whipping that out as evidence of anything is very ill advised. And in a short time that picture has been routinely getting posting around claiming its him creating a morass of link backs where you won't be able to tell where it originated. Wherever you are on the debate I think that picture isn't helping. It could be your Uncle Albert for all we know. And think how he would feel about that misattribution. We're so sorry, Uncle Albert.

If I knew all mysteries and all knowledge, and have not charity, I am nothing. St. Paul
I hang onto my prejudices, they are the testicles of my mind. Eric Hoffer

Uncle Leonard hasn't denied it, and he won't. "The poems won't allow it". Suck it up.

Would you rather it stayed a secret so we could all go back to sleep?

Would you rather it stayed a secret so we could all go back to sleep?

He also hasn't denied that this is him undergoing torture by a Nazi, and he probably won't. And AD, I'm all for bringing all the skeletons out of the LC closet and dancing with them if it is tied to something bigger. And I don't even need any other reason then his was the theme music for season 2 of True Detective. I'm petty like that. But so far all I've seen of his dirty laundry is that yeah, he sweats.
If I knew all mysteries and all knowledge, and have not charity, I am nothing. St. Paul
I hang onto my prejudices, they are the testicles of my mind. Eric Hoffer

I guess you haven't spent as much time in laundromats as I have.
"We come from France"

You know, most days now, I'm most proud of what I don't post.
Have a good evening, good night and good luck.
If I knew all mysteries and all knowledge, and have not charity, I am nothing. St. Paul
I hang onto my prejudices, they are the testicles of my mind. Eric Hoffer

I can't break the code
of our frozen love
It's too late to know
what the password was.

Refrain:
If your heart is torn
who can wonder why?
If the night is long
here's my lullaby

Though they twist the news,
and the world believes
We will live our truth
be it on our knees.
Refrain

Through a net of lies
I will come to you
When our dead arrive
I will wait there too.
Refrain

Though it's much too late,
and we've taken our stand
When they call up your name
we'll go hand in hand.

WE DON'T. IT LOOKS LIKE HIM. THE NOSE, THE PREPPY VEST AND TIE
[snip]
SORRY FOR THE CAPS.

YEAH, THAT'S ONE HELL OF A JEWISH NOSE, IF I EVER SAW ONE!

Richard Smith, Editor in Chief of the British Medical Journal 1991-2004,
in a published letter to Nature

I'd call it a Leonard Cohen nose. And leave it at that.
"We come from France"

I'd call it a Leonard Cohen nose. And leave it at that.

C'mon, he may think he's a special snowflake, you may think he stands apart from the crowd, but the nose as seen in that pic––whoever's it may be––is somehow a singular, exceptional nose, identifiable as belonging to LC and not likely to any other McGill student at the time?

(AFAIAC, that could well be LC's nose and the rest of his face too, but it could just as easily be someone else entirely. I don't look at that pic and think, "My God, that's Leonard Cohen!")
We should never forget Galileo being put before the Inquisition.
It would be even worse if we allowed scientific orthodoxy to become the Inquisition.

Richard Smith, Editor in Chief of the British Medical Journal 1991-2004,
in a published letter to Nature

If it were only the nose, the outfit, the hair, the build, the year, the institution - all that could be coincidence.

But then there are all the people he told, over the years. The close associates who were in MKULTRA. The ongoing connection with the Allan Memorial. The documented missions
Not to mention: the poems, novels, songs and interviews.

There's enough to keep you occupied for the rest of your life but I'm sure you have better things to do and so do I.
"We come from France"