Who Was Seth Rich?

@stickdog99: I completely agree with your analysis about acceptable vs. unacceptable conspiracy theories. The fact that Russian hacking is so entrenched in the mainstream psyche that you get attacked for mere skepticism of it whereas expressing suspicion over Seth Rich's death is enough to get you deplatformed is not logically justifiable. And I absolutely believe that Seth Rich's death, rather than being a random homicide, was related to his job at the DNC. All I am saying is to be careful about what you start believing after rejecting the dubious theories that "conventional wisdom" tells you to believe.

While I don't begrudge you for considering Seth a more plausible suspect for the DNC leak than Russian hackers, I still don't believe him to be a particularly plausible one. The differences in means and opportunity aren't as stark as you might think. Both Seth Rich and any hypothetical Russian hackers share the quality of not having had preexisting access to the emails: foreign hackers obviously wouldn't and Seth was a DNC employee who did not work in IT. Either way, there must have been a computer intrusion for which no actual evidence has been produced. Yes, Seth had a greater possibility of physical access and friendships with other DNC employees which might make pulling off a job easier. But it is absolutely wrong to think that merely being at the DNC gives him substantially better access to the emails when he almost certainly would have had to do some form of hacking himself.

Who the actual leaker would have been if not Seth is something I don't know, but that's not unusual. We don't know the identities of most WikiLeaks sources because part of their mission is to protect those sources. Indeed, if WikiLeaks is committed to protecting sources even posthumously, then Julian Assange's very suggestive hinting that Seth was the source seems at odds with that mission, except as a bit of misdirection. What better way to protect the real source, after all, then directing people towards a very suspicious and well-publicized homicide that superficially seems to fit?

In parapolitically-significant cases there are often several layers of possibilities before we actually approach the truth. The official narrative (e.g. Russia hacked the DNC emails) may be easy to dispatch with, but finding another narrative that seems better (e.g. Seth Rich leaked the DNC emails) isn't a sign to stop digging. Sometimes the most popular "conspiracy theory" is itself just an "official conspiracy theory" designed to hide an even better explanation. I have maintained since the story of Seth Rich's murder broke in 2016 and continue to believe to this day that his focus would have been on voting irregularities that targeted Bernie Sanders supporters, not the dirty tricks outlined in the DNC emails which are appalling but do not constitute outright election fraud in the same way registration tampering does.

But you didn't marry yourself to a definitive conclusion, so something must be wrong.

We meet at the borders of our being, we dream something of each others reality. - Harvey of R.I.

Marionumber1 » Fri Aug 16, 2019 2:54 am wrote:@stickdog99: I completely agree with your analysis about acceptable vs. unacceptable conspiracy theories.

“Sen. Sanders is a member of a large club of politicians — of every ideology — who complain about their coverage,” Baron said in a statement. “Contrary to the conspiracy theory the senator seems to favor, Jeff Bezos allows our newsroom to operate with full independence, as our reporters and editors can attest.”

Sanders spoke Monday on the presidential campaign trail in Wolfeboro, N.H., about how Amazon paid no money in taxes last year.

“I talk about that all of the time,” Sanders continued. “And then I wonder why The Washington Post — which is owned by Jeff Bezos, who owns Amazon — doesn’t write particularly good articles about me. I don’t know why. But I guess maybe there’s a connection. Maybe we helped raise the minimum wage at Amazon to 15 bucks an hour.”

Sanders has long accused the “corporate media” of putting the interests of the elite above those of the majority of Americans. But Sanders’ swipe on Monday went a step beyond his usual media critique in suggesting a news organization covered him unfairly because of its owner. His comments echoed those of President Donald Trump, who has blamed Bezos for unflattering coverage in the paper, calling the Post “the Amazon Washington Post” in tweets.

Email
Your email…
Sign Up
By signing up you agree to receive email newsletters or alerts from POLITICO. You can unsubscribe at any time.

“The hyperoverreaction from many in the media to Senator Sanders' critique reveals a bias,” Sanders’ campaign manager, Faiz Shakir, wrote in an email. “There is a sneering, contemptuous disdain that infuses those comments and a willingness to put words into Bernie's mouth that he just didn't use.”

The Vermont senator’s presidential campaign has been especially critical of the news media, suggesting that journalists are dismissing his candidacy. Shakir told POLITICO last month that “there are a healthy number [of journalists] who just find Bernie annoying, discount his seriousness, and wish his supporters and movement would just go away.”

Sanders isn’t the only Democrat airing grievances about the media. Several 2020 presidential candidates took aim at The New York Times last week over a headline framing Trump's comments after two mass shootings. The Twitter backlash against the Times came a day after former Texas Rep. Beto O’Rourke responded to a reporter’s question in El Paso, Texas, about how Trump could improve things after the shootings with, “What the fuck?”

“A vast swath of Democratic voters are pretty angry at the media,” Dan Pfeiffer, a former senior Obama aide and current co-host of “Pod Save America,” told POLITICO. “For the first time in my career, making the press a foil is good politics in a Democratic primary.”

The news media has recently covered several of Biden’s misstatements, which POLITICO’s Natasha Korecki and Marc Caputo report have undercut his message on the campaign trail. Sanders suggested the gaffes do not matter. “This is not something that’s registering with the American people,” she said.

Hardly the first time when the simple Chomsky-Herman understanding of class society and the role of corporate media ownership and structure within it in perpetuating a propaganda system aligned with the overall structures of the political economy and society is characterized as "conspiracy theory," a non-sequitur so absurd and unwarranted its use is predicated on nothing more than invocation of the magic words with no engagement of theses or evidence given, or even possible.

"Did you ever notice who employs you, and how things function over at your workplace?"

"I'm not saying you're self-censoring. I'm sure you believe everything you're saying. But what I am saying is if you believed something different, you wouldn't be sitting where you are sitting." Then watch the empty suit feel that penny drop in his worm brain. No need for Chomsky to add the thuglife smackdown kicker: BUT I WOULD! I'D BE SITTING RIGHT HERE.

A resounding Yes to all above - our collective sentiment on that utterly loathsome phrase is well documented in RI.

"conspiracy theory," a non-sequitur so absurd and unwarranted its use is predicated on nothing more than invocation of the magic words with no engagement of theses or evidence given, or even possible.

Exactly. Even more irritating/disappointing (yet predictable) is how the Average Consumer lazily appropriates that phrase in their every day lexicon, both in spoken word and in social media 'comments'.

It's everywhere. And yet, despite it all, the number of humans awakening to see through the BS/white noise steadily increases. There is reason for optimism (and also reason for pessimism...it can go either way -- or worse, remain status quo).

A federal judge has given Texas investment advisor Ed Butowsky the greenlight on a $57 million libel suit against National Public Radio over news reports about conspiracy theories surrounding the death of a Democratic National Committee staffer during the 2016 presidential campaign.

The judge rejected NPR’s bid to dismiss the suit, which Butowsky filed in June 2018, on Wednesday.

Judge Amos Mazzant of US District Court for the Eastern District of Texas ruled that Butowsky made plausible claims that the media organization defamed him in online stories about Butowsky’s role in publicizing assertions that staffer Seth Rich may have been involved in leaking Democratic emails.

NPR’s attorneys argued that the reports in question, by correspondent David Folkenflik, accurately described a defamation lawsuit filed by Rod Wheeler, a private investigator and former homicide detective hired by Butowsky to explore the Rich case, against Fox News and Butowsky. Wheeler had accused Fox of fabricating quotations in a story about Rich’s murder, but his case was dismissed last summer. 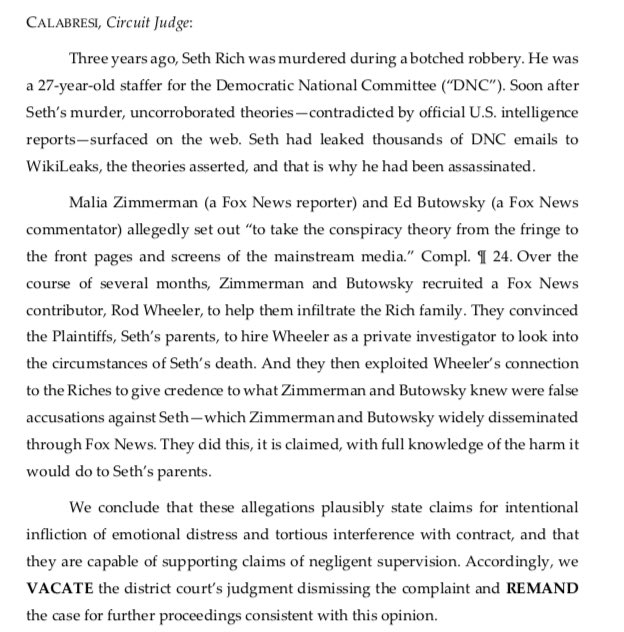 ^^^^ Let them sue, and let there be a trial to answer the question of Rich leaking emails. If any shadow of a doubt remains, they have no case, and who knows what a trial might unearth.

The court document runs onto some problems of logic; first sentence makes an assertion that hasn't been proven, so everything that follows from that premise has a problem.


"Clapper knows what I know."
"Frankly, I don't think it's a good idea but the sums proposed are enormous."

Where's the jaw drop emoji? ^^^ Thanks Harv
If Barthes can forgive me, “What the public wants is the image of passion Justice, not passion Justice itself.”

Ray McGovern ^^^^ — more GOLD — thanks, Harvey.
"Frankly, I don't think it's a good idea but the sums proposed are enormous."