The Russian Conspiracy as RI subject

Excellent point, Jack, about how Russiagate has relied on conflating Russian organized crime (that tends to be aligned with Western business interests and intelligence services) with Vladimir Putin. That's something I've often tried to point out to my liberal friends and family still buying into "Trump the Putin puppet", but unsurprisingly have had go in one ear and out the other almost every time.

One of the biggest casualties of this current Russiagate narrative is the near-total erasure of how the CIA and Russian mafia have been solid business partners since at least the collapse of the Soviet Union. A lot of credit has to be given to Daniel Hopsicker, who was pursuing these aspects over a decade before Russiagate was a story at all.

Take, for instance, the Gulfstream II that crashed in Mexico in 2006 with 3.6 tons of cocaine onboard:

The Gulfstream had been owned by Hotel Gansevoort proprietor William Achenbaum from 2001 until Aug. 30 of this year – more than three weeks before the plane crashed.

The plane was reportedly sold to Florida aircraft broker Donna Blue Aircraft, which then promptly peddled it to another man, Clyde O’Connor, for $2 million.

When Achenbaum owned the plane, it was managed by a Long Beach, Calif., company, Air Rutter International, which offered it for charter.

Air Rutter is owned by Arik Kislin of Long Island, who according to the Hotel Gansevoort’s liquor license is also a principal in the hotel.

Earlier this year, The Post reported that a Manhattan company Kislin ran in the 1990s had sponsored a U.S. visa sought by an alleged Russian mob hit man.

During the time that Kislin’s associate, Achenbaum, owned the plane, it made trips in 2003, 2004 and 2005 to the U.S. military base in Guantanamo Bay in Cuba, the McClatchy Newspapers group reported.

Arik Kislin is the nephew and business partner of Russian mobster Semyon Kislin aka Sam Kislin, who donated extensively to both Democratic (Chuck Schumer, the Clinton-Gore campaign, etc.) and Republican (Rudy Giuliani, Alfonse D'Amato, etc.) politicians. So we have a plane owned by a well-connected Russian mob operative that is doing CIA rendition flights and smuggling cocaine on the side.

Sam Kislin was business partners with another reported Russian mobster Tamir Sapir, whose organization partnered with the Bayrock Group that developed many of the Trump brand properties. And a little-noted fact in his biography is that, after he and Sam emigrated from the USSR and started their electronics store business in NYC, he was invited to join the Council for American-Soviet Trade headed by none other than "then-Vice President [and longtime spook] George H.W. Bush".

Per the previously-linked Public Integrity article, Sam Kislin's firm was also being used for money laundering by Mikhail Chernoy, a Russian aluminum oligarch and reported mobster. Chernoy just happens to be one of the chief financiers of the Intelligence Summit, a group for military and intelligence operatives around the world to come together to discuss new tactics in the "war on terror".

Chernoy's rival in the aluminum business, Oleg Deripaska, indeed has similar connections too. The head of Guyana's state privatization efforts, Michael Brassington Sr., opted to sell Guyana's state-owned bauxite mining company to Deripaska's RusAl corporation back in the 90s. His son Michael Brassington was a drug smuggler who flew numerous heroin flights on planes owned by Wally Hilliard of Venice FL, a former Wisconsin health insurance executive whose company was bought out by the company of Myron Du Bain, a politically-connected businessman who once served in the OSS (the CIA's predecessor). Brassington even had a letter from Customs telling them to ignore his prior July 2000 drug bust, the kind of protection that CIA drug pilots often enjoy. Note that the intended final stop on that July 2000 flight was a contact in Brighton Beach NY, a known Russian mob enclave. So once again, we have the outlines of a CIA drug running operation in partnership with Russian organized crime.

And Hilliard, meanwhile, is most prominent for owning the Huffman Aviation flight school in Venice FL where 9/11 hijackers Mohammed Atta and Marwah al-Shehhi trained. Atta's closest friend during that time was reportedly Wolfgang Bohringer, a German pilot who boasted of knowing Atta and stated, upon his 2006 arrest on international terrorism charges, that "You can’t arrest me, I’m working for the CIA". Bohringer also happened to boast that he was a smuggler for Russian mobster Viktor Kozeny. Kozeny pulled off multiple privatization scams in the former Soviet Union, first with a voucher scheme in the Czech Republic and then a fraudulent oil venture in Azerbaijan.
His partners in the Czech scam included George Bush Sr.'s chief of staff John Sununu. His partners in the Azerbaijan scam included former US Army Counter Intelligence officer, Senate majority leader, and Jeffrey Epstein pedophile pal George Mitchell, fashion company owner and Jeffrey Epstein black-book associate Frederic Bourke, and the CIA-linked financial firm American International Group (AIG). Back during the time of the Czech scam, rumors were going around that Kozeny laundered money for Colombian drug cartels or even "was a tool of the CIA". Imagine that.

^Thanks for that densely packed nugget.
And while we spoke of many things, fools and kings
This he said to me
"The greatest thing
You'll ever learn
Is just to love
And be loved
In return"

Live: Kirk Wiebe & William Binney AMA
Streamed live 2 hours ago
If Barthes can forgive me, “What the public wants is the image of passion Justice, not passion Justice itself.”

Article on Joe and Hunter Biden Censored By The Intercept
https://greenwald.substack.com/p/article-on-joe-and-hunter-biden-censored 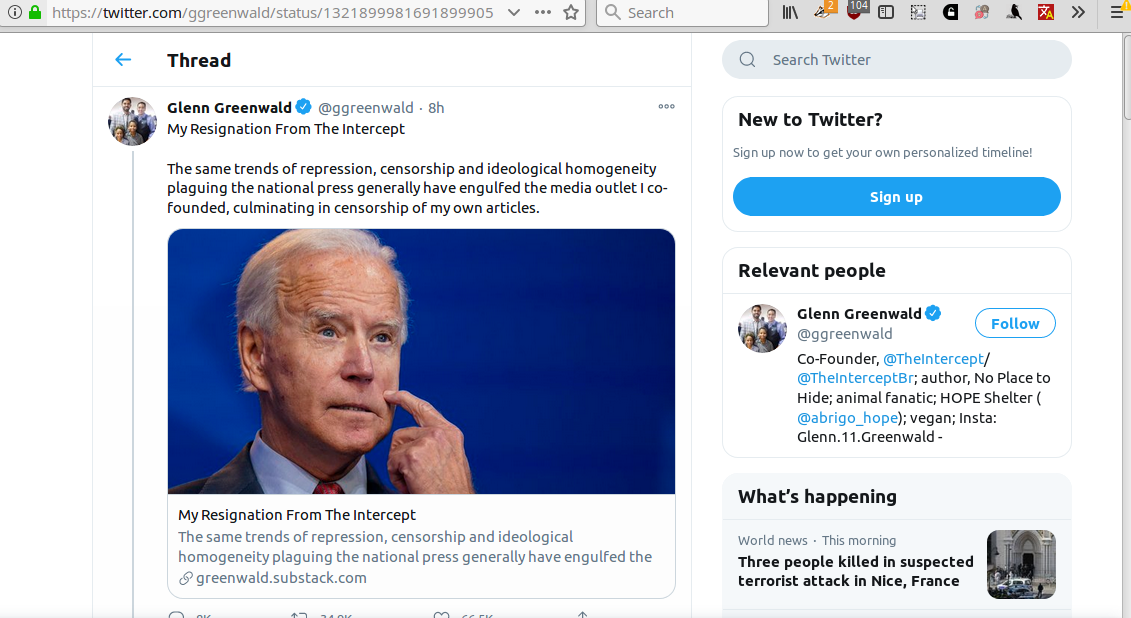 https://twitter.com/ggreenwald/status/1321899981691899905
If Barthes can forgive me, “What the public wants is the image of passion Justice, not passion Justice itself.”

The Real Hunter Biden Story Everyone is Missing
https://zeynep.substack.com/p/ignoringblackmail
Why aren't we paying attention to the blatant blackmail?

The Trump campaign’s associates, apparently, had these alleged materials for many months, if not for a full year. They decided to release the contents with little time for anyone to actually investigate them. Why should that be rewarded with attention and innuendo, instead of being treated properly?

The above is bullshit, from what I understand it was the FBI not Cheeto's team that sat on this bombshell for over a year, further, I believe there is some truth to the ObombaObidenClinton shadow/wetwork on the sealteam 6. We know for a fact that the burial at sea was complete stagecraft.

For all we know OBin Laden, is somewhere hanging out with JE and Maxwell.

Competing Cabals or alliances of convenience?

Lastly, Trump fired Comey because Comey is a FUCKING CROOKED liar so is Wray, and in with the Clapper, Brennan, Hayden, Mueller, Alexander, treason 6, having said that, blackmail is indeed what makes Washington tick. But this Cabal has gone way beyond blackmail... I'd even throw in Holder from DOJ completing 'Chicago style'.

Zeynep certainly has a point about attention and timing (Attention vs speech) etc, but she doesn't see the wider screen of traitor's of the democratic republic and the mere thought that ObombaObidenClinton 'Chicago style' would have the PNAC crowd on their side, tells you all you really need to know about her limited view. They're all grifters making hey, while the Treason 6, (Poppy's boys? surely Bar is one) sale out the country. But wtf do I know... 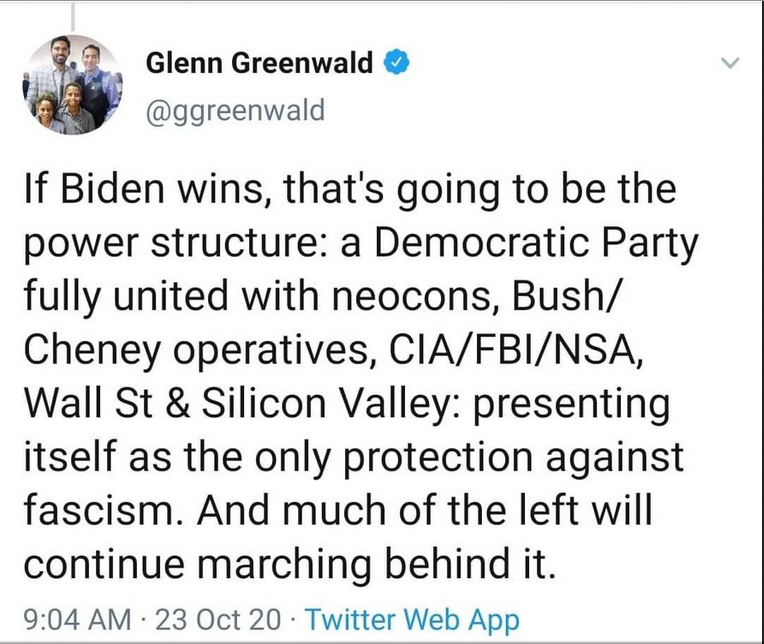