The RI thread about Alexandria Ocasio-Cortez

She didn't endear herself to when me she dismissed Jeremy Corbyn as an "anti-Semite" but of course, in the interests of RI unity, I rationalised that away and didn't bring it up. This is offered as food for thought and I'd be happy to read corrections if this is wide of the mark, irrelevant or a false analysis.

Within hours of the media’s declaration that Joe Biden had won the presidential election, the Democratic Party launched a vicious attack against its so-called “left” wing, represented most prominently by Vermont Senator Bernie Sanders and New York Representative Alexandria Ocasio-Cortez.

The narrative being promoted by the Democrats is that the association of the party with socialism cost its candidates millions of votes in the presidential and congressional races. The Democrats lost seven House seats in battleground districts, including in South Carolina, New Mexico, Iowa and south Florida, and failed to gain control of the Senate.

According to leading commentators, Democratic as well as Republican, the Democrats failed to realize their hopes for a “blue wave” because voters associated them with socialism. President-elect Biden and the Democratic Party-aligned media are insisting that the election result must be understood as a plea from the American people for bipartisan unity with the Republicans.

They do not attempt to square this narrative with the large demonstrations that broke out all over the country on Saturday celebrating the defeat of Trump.

Democratic Senator Joe Manchin appeared on “Face the Nation” Sunday morning and assured “his Republican friends” that Biden would “govern from the middle” and “reach out across the aisle… to bring Democrats and Republicans together.”

Manchin went on to blame the “socialist” label for Democratic losses in West Virginia and elsewhere. He said rural America was “scared of this socialism that was thrown out there by a radical part of the so-called left that was throwing all this out.”

During an appearance on NBC News’ “Meet the Press,” House Democratic Whip James Clyburn of South Carolina echoed this sentiment, lashing out against “socialist” demands such as “defund the police.” He agreed with host Chuck Todd that such rhetoric cost a number of seats— including in the high-profile South Carolina race between well-funded Democrat Jamie Harrison and incumbent Senator Lindsey Graham.

Perhaps the most vulgar and vicious attack came from Democratic Congresswoman Abigail Spanberger, a former CIA agent. In a recorded call with House Democrats, Spanberger ranted, “We need to not ever use the words ‘socialist’ or ‘socialism’ ever again.”

In response to these attacks, the “progressive wing” of the Democratic Party has completely capitulated, downplaying its mildly left rhetoric and making public pleas to the incoming Biden administration for a seat at the table.

The most open expression of this fecklessness has come from New York Representative Alexandria Ocasio-Cortez, who gave a vivid description of the internal Democratic Party campaign against her to the New York Times over the weekend. “The last two years have been pretty hostile,” she said. “Externally, we’ve been winning. Externally, there’s been a ton of support, but internally, it’s been extremely hostile to anything that even smells progressive.”

Ocasio-Cortez appeared on CNN’s “State of the Union” program Sunday morning. When asked about the statements blaming Democratic losses in the election on talk of “socialism” and “radical” demands by herself and other “progressives,” she responded by distancing herself and her party from anything having to do with progressive politics. “Not a single member of Congress that I am aware of campaigned on the slogan of socialism or defunding of the police in this general election,” she declared.

In the same breath she noted that such demands were raised in the massive protests that swept the country in the aftermath of the police murder of George Floyd. In other words, as Ocasio-Cortez herself acknowledged, not a single Democrat campaigned on the issues that animated millions of workers, and especially young people, and drove them to protest for weeks in the streets of every major city in the US.

Ocasio-Cortez spent a large portion of the interview touting her ability to win voters through digital marketing, appealing to the Democratic Party establishment to make use of her services to boost the party’s electoral fortunes. She summed up her analysis of the Democrats’ losses in key House races by saying the defeated candidates employed an outmoded “2005”-type digital advertising strategy.

In her interview with the New York Times published on Saturday, Ocasio-Cortez made her pitch more explicitly, saying:

I’ve been begging the party to let me help them for two years. That’s also the damn thing of it. I’ve been trying to help. Before the election, I offered to help every single swing district Democrat with their operation... And now they’re blaming us for their loss.

The political role of Ocasio-Cortez, as she herself explains, is to provide a left gloss to a party that is moving further to the right.

There are a number of important points to make in relation to these developments.

First, the rapidity and viciousness with which the political establishment, Democratic and Republican, has lined up behind the campaign against “socialism” is a stark indication of the immense fear that exists within the ruling elite of the growing radicalization and leftward movement of the masses. What they fear above all is that this growing movement of workers and young people will break free of the stranglehold of the two-party system.

As for the popular response to invocations of socialism, the reality is far removed from what is being claimed. The Democrats want to ban talk of socialism precisely because ever larger sections of the population are attracted to a radical egalitarian alternative to capitalism.

This was reflected in the broad support, particularly among young people, for the campaigns of Bernie Sanders in 2016 and again in 2020, which were sabotaged by the Democratic Party, aided and abetted by Sanders himself.

Masses of workers and youth are moving to the left. A new report published by the polling firm YouGov found that within the Gen Z group (ages 16-23), support for socialism increased nearly 10 percentage points over the course of a single year: from 40 percent in 2019 to 49 percent when the poll was taken in September 2020.

Workers in the US and around the world have lived through immense experiences over the course of the Trump administration and in particular this past year. They have watched the Democratic Party, including Bernie Sanders, facilitate the attacks on the working class spearheaded by Trump, including the trillions of dollars handed out to Wall Street and the giant corporations through the CARES Act.

They have suffered the catastrophic toll in death and disease, as well as mass unemployment, resulting from the refusal of the Trump administration to implement any serious measures to contain the coronavirus pandemic. They have been forced into factories, workplaces and schools that are breeding grounds for infection without any real safety measures in place, as Trump and Democratic governors and mayors implemented an economic “reopening” driven by the profit interests of the corporate elite.

They well remember the violent attacks on protesters during the protests against the murder of George Floyd and Trump’s June 1 attempt at a military coup d’état.

They did not vote for Biden because they desired “reconciliation” and “unity” with the party that enabled Trump to persecute immigrants, block measures to contain the coronavirus pandemic, incite fascist vigilantes and killer cops, and ride roughshod over basic democratic rights. Quite the opposite—the election was, above all else, a massive popular repudiation of Donald Trump, his catastrophic mishandling of the pandemic, and his fascistic and authoritarian rhetoric and policies.

The attacks on the so-called “progressive” wing of the Democratic Party once again reveal the bankruptcy of the pragmatic and opportunist politics of “lesser evilism,” based on the fiction that the Democratic Party, the oldest capitalist party in the US, can be pressured from below to become an instrument for progressive reform or even socialism.

The claim that a Biden administration would create “space” for the left, used to browbeat youth into voting for Biden, was touted ad nauseum by all of the organizations in and around the Democratic Party, most prominently the Democratic Socialists of America (DSA) and its affiliated organ Jacobin. It took only a few hours after Biden’s declared victory for this political fraud to be exposed.

The reality is that a Biden administration—should it actually come to power, which is by no means guaranteed given Trump’s refusal to concede and the abject cowardice of the Democrats—will seek to establish a de facto coalition government with the Republican Party. Moreover, the right-wing policies that a Biden administration plans to implement, policies of austerity and militarism, will create conditions favorable to a further growth of the far right.

What the 2020 elections and their aftermath have definitively shown is that nothing progressive can be advanced within the framework of the Democratic Party and its so-called “left” representatives such as Ocasio-Cortez and Sanders. A Biden administration will rapidly come into conflict with the working class, fueling a growth of the class struggle and posing the necessity for a mass independent movement fighting for socialism.

There is an immense constituency for socialist politics in the working class in the US and around the world. But the organic striving for an alternative to capitalism must be turned into a conscious movement armed with a revolutionary socialist and internationalist program. This requires the development of a new political leadership in the working class. The central issue is the building of the Socialist Equality Party and its youth organization, the International Youth and Students for Social Equality.

The political role of Ocasio-Cortez, as she herself explains, is to provide a left gloss to a party that is moving further to the right. 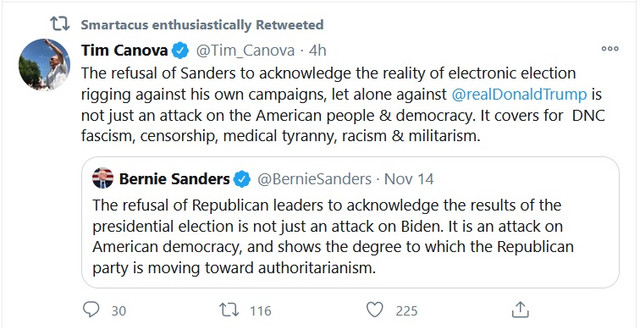 How does one resolve this tweet by Sanders? One has to either believe Sanders is somehow blissfully unaware of the DNC's blatant acts of fraud -- twice -- against his own campaign, OR: he's a willing player.

Any other options here?

I see AOC as playing the same role, but for the younger (Millennial/Gen Z, etc.) demographic.

Jack, do you see what I meant now? I always liked her, still do, but I just knew what would happen. Call it a gift.

Edit: I feel Medhurst needs to learn to control his justifiable hatred of the absolute bastards to some degree (a fellow sufferer speaks), precisely because he stands a good chance of making them aware of exactly what they are. Which is a fate worse than death for them - rebirth.

Remember Richard, the pen is mightier but mostly when the work is actually read.
And while we spoke of many things, fools and kings
This he said to me
"The greatest thing
You'll ever learn
Is just to love
And be loved
In return"