It should not be forgotten that the only reason universal healthcare is a front and center issue—and that Amercians are even vaguely aware that it's possible—is: Bernie Sanders.

That $600 a week unemployment bonus that Americans needed and depended upon was included in the bill only because Bernie Sanders shamed them into it. It could not have happened if Sanders had set himself in opposition to the DNC and Democratic caucus.

The only meaningful healthcare language in both the Covid-19 'task force' and the DNC platform was included only because Sanders fought them for it. Could not have happened if Sanders had alienated himself from the DNC.

Sanders remaining and working within the Democratic sphere is a tactical decision with the only aim of better net outcomes for people. How many families did not get evicted because they received that $600 a week?

That bottom line of human suffering is how Sanders' tactics should be judged. Winning a virtuous point of contention on Russiagate doesn't feed & house the unemployed.

Sanders is the only asshole in Washington making any real positive difference—in an environment where doing that is nearly impossible. He's doing the fucking impossible. And anyone to the left of Joe Biden should be praising and thanking Sanders for laying the tiny patch of progressive ground they have to stand on.

The perfectionists are calling out The Wrong Man.
"It seems to be what we have now is a political system which has essentially become, for the last thirty or forty years, a war on the human imagination."
(David Graeber)

Your points are well taken, Elvis, and I'll disclose I haven't considered the perspective that Bernie is purposely allowing himself to be repeatedly shafted by the DNC (to put it in crude terms) as part of a long-term strategy to help drive and push through legislation/relief such as those you highlight above.

Though on the other hand, I wouldn't call those criticizing him 'perfectionists'; it appears their view (though I may well be wrong -- I don't know any of them) seems to be born out of frustration of what could have been rather than the resignation of what it is, now.

Any active campaigning on behalf of Empire in many respects will tangibly, demonstrably impact millions of lives: lives and livelihoods will be lost, both here in the U.S. and all over the world, because of the continued actions of American Empire.

Perhaps what frustrates these critics is that they are offered a glimpse of what may be possible -- and Benie may be the one politician uniquely positioned to have offered a fighting chance for 'change' (assuming his campaigns for President over the years were genuine and not a form of controlled opposition), at least right now -- when in fact, it seems it was never in the cards as an actual objective.

Deflating, to say the least.

None of you are represented by any part of the political spectrum. And you're all in the majority. The trick is to convince all of you that you're all in the minority. Any questions?
And while we spoke of many things, fools and kings
This he said to me
"The greatest thing
You'll ever learn
Is just to love
And be loved
In return"

That was an attempt to describe life in the UK but projected out upon all of you.

Is it any different wherever you are?
And while we spoke of many things, fools and kings
This he said to me
"The greatest thing
You'll ever learn
Is just to love
And be loved
In return"

Belligerent Savant wrote: in fact, it seems it was never in the cards as an actual objective.

The objective was real, it's plain that Sanders was simply blocked and tackled by the usual insurance/banking/PE PTB forces. Why would they support a long con that cost them a fortune to beat back and brought them perilously close to being shut down? C'mon man—they're the real long con.

The real psyops in this are the generations of corporate brainwashings that render people unable to even imagine a different way of doing things. Sanders punched a hole through that veil and people got a peek at what's possible. That is immeasurably important.

Don't blame the victim just because he stuck his neck out and might have got it chopped off.

Con man Biden has been their enabler: fifty years working to boost banks and cut social programs, all as an ostensibly librul Democrat.
"It seems to be what we have now is a political system which has essentially become, for the last thirty or forty years, a war on the human imagination."
(David Graeber)

You're not alone in that sentiment. 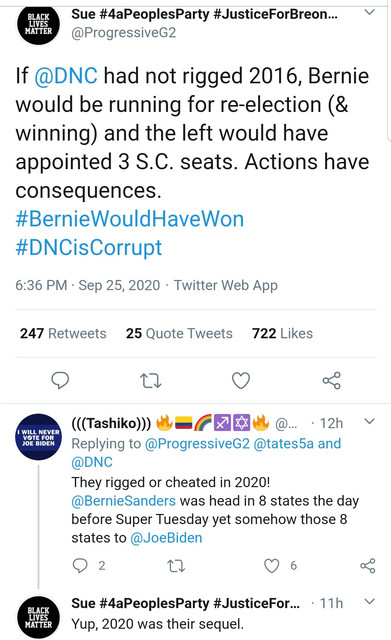 Fuck it. I hope one of them wins! This country deserves everything it gets.... Celebrity Host or Dino, makes no fucking difference at all. And fuck the Burn....
If Barthes can forgive me, “What the public wants is the image of passion Justice, not passion Justice itself.”

Anyone politically aware enough to realize that both Trump and Biden completely suck is my ally.

The biggest problem with our so-called democracy are all the "politically engaged" people who are still dim-witted enough to be stans of either party or any leader of either party because they root for their favored blue or red as if politics were a sporting event.

IMHO, we need to form a None of the Above party that seeks to recruit anyone and everyone enlightened enough to unplug from the Super Shit Bowl that is our current American Demopublican political system. Almost any regular person trying to help society would do a better job than our current completely corrupt billionaire bootlickers.

The Supreme Court Is A Corporate Star Chamber

The high court has become one of the most powerful weapons of Big Business and billionaires.

Last week, the U.S. Supreme Court issued two commendable rulings that may have seemed off brand for a conservative judicial panel: In one case, the court prevented President Trump from deporting the children of undocumented immigrants; in another case, the court extended anti-discrimination protections to cover sexual orientation and gender identity.

Progressives rightly lauded these civil rights victories, which dominated the headlines. But amid the celebrations, the court also issued the three following rulings, which received relatively little attention:

The court prevented workers and retirees from suing Wall Street firms that bilk their pension systems (see this week’s previous story on that here).

Once again, the high court used business cases to fortify the power of the already-powerful. I say “once again” because for all the focus on the court’s rulings on important social issues, much of the justices’ work is on business litigation — and in that role, the court now serves as a reliable star chamber defending corporations and the wealthy.

This is a development that is only rarely spotlighted — and it is barely part of the discourse when Supreme Court appointments are referenced in national politics. Indeed, one of the very few times corporate power became an issue in a recent Supreme Court nomination fight was when a few senators briefly asked Neil Gorsuch about his legal defense of a company’s decision to fire a worker for trying to not freeze to death — but Gorsuch was confirmed anyway.

That confirmation helped the court continue to be a driving force behind the corporate takeover of our country and our democracy.