YES, Bernie is in. I hope he has sufficient security, things are fixing to get rough in a hurry.

The Guardian sets the tone...
You do not have the required permissions to view the files attached to this post.
-I don't like hoodlums.
-That's just a word, Marlowe. We have that kind of world. Two wars gave it to us and we are going to keep it.

Given the obvious security risks, I'm surprised he didn't just retire to that ritzy luxury vacation house he bought after the primary. 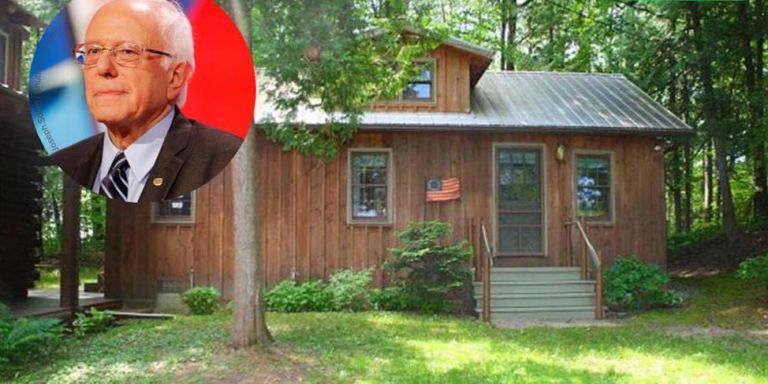 Don't get me wrong, I'll take the Bern, but I'm afraid that ship has sailed.... I could be wrong; happy to be wrong. But fear I'm not....
If Barthes can forgive me, “What the public wants is the image of passion Justice, not passion Justice itself.”

Is this trying to insinuate that Bernie is somehow a fraud, talking about income and wealth inequality despite having the financial means to buy an expensive vacation home? Because I've seen a lot of people who ran with that narrative, ignoring that his wife had to sell her family's vacation home in order for them to purchase this one.

I was being very sarcastic. The house was not terribly expensive, is very low-key, and, IIRC, was funded with his wife's inheritance.
"It's not rocket surgery." - Elvis

Hard not to feel that way when, googling him lead this evening alone to maybe 50 stories saying this. Well, that or that he was not going to do well with african americans or that his 2016 campaign had big sexism problems (it did but so did HRC's and Trump's).

My hope is that the absolute unity blast - ie Trump and WaPo-zos agree! Bernie "missed his chance!" - indicates Bernie's still quite dangerous.

Incidentally, he raised more money after announcing than any other candidate so far.
"It's not rocket surgery." - Elvis

Yes, well, there's no denying that his cult is pretty strong.

Personally, anything that has even a wiff of 2016 to it,I don't want to see. If Hillary "shouldn't" run, then neither should Bernie.

Also, he shouldn't run as a Dem, seeing as he's NOT a Dem. He only caucuses with them.

I don't know... it just seems more and more obvious to me that Bernie relishes his status as a spoiler... a spanner in the Democratic works. I'm sure RT and Jimmy Dore are going to be positively thrilled, in any case.

Me, I'm still holding out for a Biden/Franken 2020 ticket!

To me, seeing any kind of egotism problem with Bernie is just weird and has a whiff of projection to it. As for his candidacy being some kind of power trip or performance, he has articulated the most clear, leftist, unambiguous and ambitious program of any US presidential candidate in decades. These contortions are just strange, to make him out to be "just as bad as everyone else" while at the same time everyone else is the better option.


Jacqueline Luqman wrote:Well, now it’s a fight. Now it’s a real fight for what I’ve been saying is the soul of the Democratic Party. Whenever we say that, you know, this party is fighting for its soul, we think about the Republicans. But the Democratic Party has been fighting for its soul for a long time. And I have to borrow from Dr. Spencer’s book title. Now the Democrat Party is in a real fight for whether it wants to continue to be the party of corporate neoliberalism and American imperial militarism, or does it want to be a more progressive, people-focused party. It’s a fight now, and this is going to be a long and interesting campaign season.

Regarding homes, fwiw....unless he's moved since 2016, Sanders has another residence on Capitol Hill. 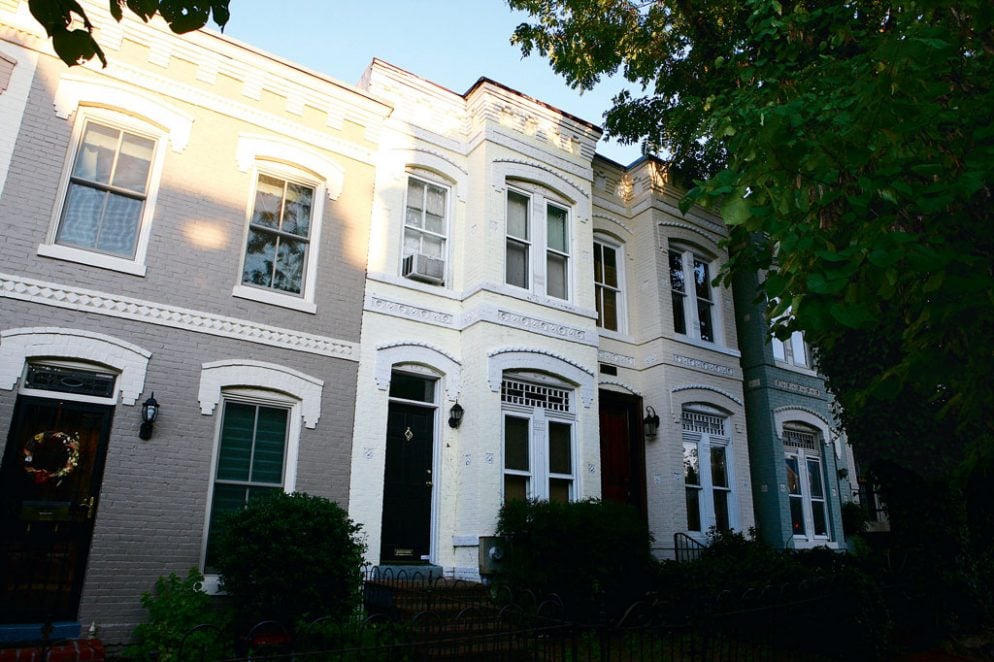 Like the socialist senator, this 1890 rowhouse is no-frills, with just one bedroom and two baths. What it lacks in frippery it makes up for with its location, three blocks from the Capitol and a half block from Stanton Park.

At the risk of sounding like an aging ageist, Sanders is 77 (if winning were the aim, however unlikely, he'd be 79 when moving into the White House and 83--or 87--when leaving). Very old, in terms of entering a grueling presidential race. WTF is his motive? Another Swan Song?
The greatest sin is to be unconscious. ~ Carl Jung

Jerky wrote:If Hillary "shouldn't" run, then neither should Bernie.

This makes no sense whatsoever!

RocketMan wrote:To me, seeing any kind of egotism problem with Bernie is just weird and has a whiff of projection to it. As for his candidacy being some kind of power trip or performance, he has articulated the most clear, leftist, unambiguous and ambitious program of any US presidential candidate in decades. These contortions are just strange, to make him out to be "just as bad as everyone else" while at the same time everyone else is the better option.

Bernie Sanders is still the most popular politician in America.

It's not rocket surgery.
"It seems to be what we have now is a political system which has essentially become, for the last thirty or forty years, a war on the human imagination."
(David Graeber)

Me, I'm still holding out for a Biden/Franken 2020 ticket!

Is that a joke? Creepy Joe?

Susan Swain looks like she's gonna eat him up in that interview...lol Yeah, he's been singing the same song all these years, but I don't think he has a plan to implement upon election to stay the upheaval that his election would cause. Unless like the right, there are leftist think tanks with long thought out plans on the table ready and willing to stay and satisfy the pandemonium that his policies would surely bring there isn't a chance in hell. They'll kill him, whose his running partner? Cause that's who'll be running the gauntlet.
If Barthes can forgive me, “What the public wants is the image of passion Justice, not passion Justice itself.”

Ah, this was glorious. The sheer contempt on Clinton's face...

Clinton: "Well I know journalists have asked who you DO listen to on foreign policy and we have yet to know who that is..."

Sanders: "Well that ain't Henry Kissinger, that's for sure."
-I don't like hoodlums.
-That's just a word, Marlowe. We have that kind of world. Two wars gave it to us and we are going to keep it.


Yesterday, America’s second-most-famous self-identified democratic socialist, Bernie Sanders (he’s no AOC, but he’s pretty famous), announced his 2020 presidential candidacy, and as my colleague Eric Levitz observes, he’s saying the “same thing he said while selling Eugene Debs documentaries door-to-door in the 1970s, or running for mayor of Burlington in 1980s, or filibustering a budget deal in 2010, or fomenting ’political revolution’ three years ago.”

And while Sanders hasn’t changed his socialist principles or much of anything else about his pitch, perhaps the most commonly uttered remark about what has changed since 2016 is that the Democratic Party has moved in his direction. But while the large 2020 field is indeed, for the most part, cozying up to Bernie’s “populist” rhetoric and policy prescriptions, that’s not necessarily true of the socialist self-designation, despite joint efforts by elements of the left and the entire, unified Republican Party to claim the red flag (the property of democratic socialists long before the advent of communism) for the Donkey Party. Indeed, more and more 2020 Democratic presidential candidates, including some who aren’t old-school Clintonian centrists, are making it clear that the economic system they favor is not socialism but that ol’ devil capitalism.

Beto O’Rourke, perhaps the potential candidate in the 2020 field most likely to pose a threat to Sanders’s youth support, clearly isn’t enamored of the s-word:

Patrick Svitek
✔
@PatrickSvitek
· Feb 19, 2019
Replying to @PatrickSvitek
Should all border walls come down, not just the El Paso one? “I think there is a role for physical barriers in some places," O'Rourke says, noting he was making pt. w/ Hayes based on EP's specific situation. BO advocates working w/ "local stakeholders" on best security solution.

Patrick Svitek
✔
@PatrickSvitek
Like he did over weekend in Wisconsin, O'Rourke responds to question about rise of democratic socialists by declaring himself a capitalist. "I don’t see how we’re able to meet any of the fundamental challenges we have as a country w/o in part harnessing the power of the market."

Twitter Ads info and privacy
30 people are talking about this
Senator Kamala Harris, who has been battling critics for progressive support and hails from progressive San Francisco, is also eschewing socialism, as The Hill reports:

Sen. Kamala Harris (D-Calif.), a 2020 presidential hopeful, told reporters at a campaign stop in New Hampshire on Monday that she is “not a democratic socialist …”


“I believe that what voters do want is they want to know that whoever is going to lead understands that in America today, not everyone has an equal opportunity and access to a path to success, ” she added, saying U.S. needs to “course correct” for income inequality.

And in this respect, O’Rourke and Harris are both emulating the candidate who probably represents the strongest threat to Sanders’s electoral base, Elizabeth Warren, who has long professed her tough love for capitalism, as Josh Barro noted last year:

Sen. Elizabeth Warren’s recent remark that she is a “capitalist to my bones” is being treated as some kind of news, even though it is consistent with the policies and rhetoric the liberal Massachusetts senator has espoused for her entire career.

All these left-of-center Democrats, of course, are standing in the tradition of the party leader who arguably first introduced a serious social democratic strain to American liberalism, Franklin D. Roosevelt, who is often credited with saving capitalism from its excesses — and heading off more radically egalitarian challenges to the system like Huey Long’s “Share Our Wealth” plan.

No, the term “socialism” doesn’t strike fear into the hearts of Americans the way it did during the Cold War, and that’s a good thing for anyone who believes the promise of this country requires a less neurotically intense allergy to government activism in the national interest. But Democrats are making it clear that support for social democratic staples like single-payer health care or aggressive bank regulation are drawn from the practical needs of the citizenry, not perusal of dusty pamphlets from the early-20-century British Fabian Society or any other ideological template. Perhaps Sanders and AOC will yet make American politics safe for socialism writ large. But in the meantime, a progressive take on democratic capitalism is likely to prevail in the marketplace of ideas.

Users browsing this forum: No registered users and 15 guests