U.S. Troops to Head to Pakistan 27 Dec 2007 Beginning early next year, U.S. Special Forces are expected to vastly expand their presence in Pakistan, as part of an effort to train and support indigenous counter-insurgency forces and clandestine counterterrorism units, according to defense officials involved with the planning. A new agreement, reported when it was still being negotiated last month, has been finalized. And the first U.S. personnel could be on the ground in Pakistan by early in the new year, according to Pentagon sources.

Bhutto assassination is an excuse for renewed martial law measures: Pakistan on 'Red Alert' 27 Dec 2007 News of Benazir Bhutto's death brought a swift and angry reaction from supporters in Sindh and its capital, Karachi, where fires were set, shots fired and stones thrown. "Police in Sindh have been put on red alert," said a senior police official. "We have increased deployment and are patrolling in all the towns and cities, as there is trouble almost everywhere."

'Red Alert' in Pakistan allows riot police and paramilitary police to 'fire live rounds' at protesters. (MSNBC) US tax dollars are funding the clampdown. See: Billions in U.S. Aid to Pakistan Wasted, Officials Assert 24 Dec 2007 After the United States has spent more than $5 billion in a largely failed effort to bolster the Pakistani military effort against 'Al Qaeda' and the Taliban, some American officials now acknowledge that there were too few controls over the money. See: US Senate approves Pakistan aid worth $785m 20 Dec 2007 The US Senate has approved a $785 million assistance package for Pakistan for the fiscal year 2008 as lawmakers passed with a bipartisan 76-17 vote a massive appropriations bill for federal spending on Tuesday night.

Pakistan's Bhutto assassinated in gun, bomb attack 27 Dec 2007 Pakistani opposition leader Benazir Bhutto was assassinated on Thursday as she left an election rally in the city of Rawalpindi, putting January 8 polls in doubt and sparking anger in her native Sindh province. State media and her party confirmed Bhutto's death from a gun and bomb attack. [Pakistani opposition leader Benazir Bhutto shot in neck and chest as she tried to leave rally (MSNBC)] 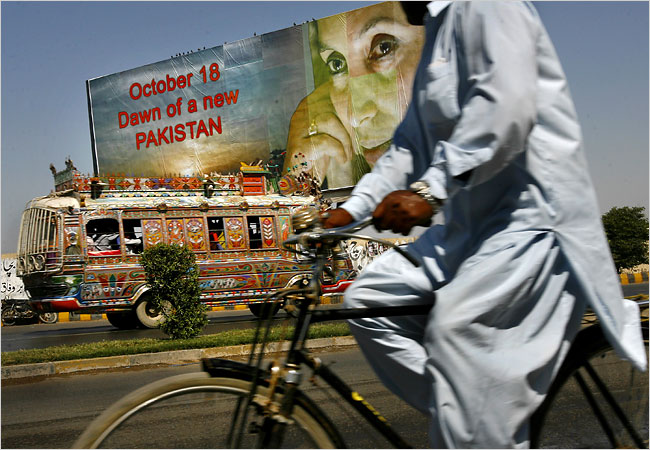 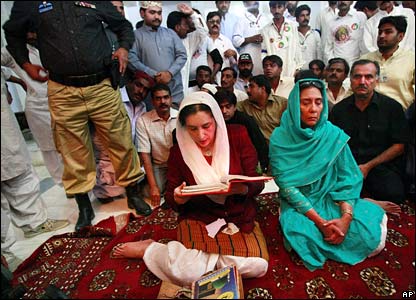 yes, all day i felt like ( ala Donnie Darko) i have been flowing backward, and simultaneously, fast forwarding through Time.

The images of the assassination day in Pakistan reflect on images of the USA's violent past and at the same time i feel like the images of a suicide bomber's devastation will be upon us all too soon here in the States.

I feel like I am watching TV, to quote Andy Warhol.

Asta wrote:I feel like I am watching TV, to quote Andy Warhol.

I feel like I am watching myself watching TV.

Days like these hopelessly run together, and there's nothing for us to do but be a choir of detached mourning.

Seems, thanks for the link and the photo/lyric tribute.


re "the man who killed Osama bin Laden," my gut says she really did mean to say Daniel Pearl. I've made similar brain farts in conversation and heard worse than this one made in interviews. Sometimes the host suggests a correction and sometimes not, and I'll make the mental substitution myself. Usually it's no big deal, because there's not this kind of scrutiny.

She said this so nonchalantly that if she meant it then it's unlikely this would have been the first time she said it. It would already be out there in some form or another, that Omar Saeed Sheikh had murdered bin Laden.

If "9/11 Truth" now runs with "Omar killed bin Laden" it will be running away from the better story. Omar is a challenge to the official account because he connects to both the ISI and bin Laden, and he killed Pearl who was investigating that same connection. To now call him the "killer of bin Laden" on the strength of this toss-away line would be, I think, the wrong path to take.

I know it's presumptuous to say she said this, but this is what she meant to say, but I think it makes the best sense.

the weird part is that the phrase "the man that murdered bin laden" might someday be true in a theoretical sense. Omar Sheikh is at present still alive, correct? and so is Bin Laden, true?!?
.
“Come, & keep your comrade warm.” - Majestic-12 [Bot]

In a Cannonfire post today there was a link to an older post of his that contained the video of Bhutto making that comment. I think the video link is dead but he said that the context makes it plain that she was referring to Pearl. And did anyone see A Mighty Heart? I heard it's good.

Omar Saeed, the British MI6 agent/ISI operative who helped train the hijackers with CIA asset Luai Sakra and got the head of ISI(allegedly) to wire Atta $100,000...

was along with Osama, handled by Brig. Ejaz Shah. The same top cop who stood down Bhutto's security detail at the last attempt on her life:

In otherwords, Musharaf's best buddy and top cop and former ISI official was the personal handler of Osama and Omar Saeed for the ISI. AND was the head of security for Bhutto
http://in.news.yahoo.com/071019/139/6m5uk.html

even the mainstream news is calling this an ISI inside job.

Bush gives Pakistan 10.59 billion since 9/11 to "stop terror", but conduited through the ISI it actually fuels al Qaeda.

My belief is that this Bhutto event is meant for the nwo to try and get the ISI to push for an Islamic extremist takeover of Pakistan...all leading to WW3.
"Do you know who I am? I am the arm, and I sound like this..."-man from another place, twin peaks fire walk with me

I don't think Bin Laden is alive. Just a gut feeling I've had for a long time -- and wasn't his funeral reported in the Saudi papers?

How did Bhutto did not know this? These kinds of details give me the impression she let this happen to herself.
"but I do know that you should remove my full name from your sig. Dig?" - Unnamed, Super Scary Persun, bbrrrrr....

How did Bhutto did not know this? These kinds of details give me the impression she let this happen to herself.

I am starting to think the same thing (why was she hanging out of the car?!) but I can't figure out why. Martyrdom?

And now the media spamming confusion over the actual cause of death.

I've noticed people in general tend to zero in and drown on details like this losing focus of the bigger picture ala no plane theory misdirection, etc.
"but I do know that you should remove my full name from your sig. Dig?" - Unnamed, Super Scary Persun, bbrrrrr....

et in Arcadia ego wrote:And now the media spamming confusion over the actual cause of death.

I've noticed people in general tend to zero in and drown on details like this losing focus of the bigger picture ala no plane theory misdirection, etc.

Back and to the left, melting points, the sun roof did it!
Yeah the same MO

The average human mind wants details on the action, not the who and why.
"Do you know who I am? I am the arm, and I sound like this..."-man from another place, twin peaks fire walk with me

Well, there's this to consider from the front page of Dailykos right now (Meteorblades, who I respect):

Nor has there been much mention of what Bhutto told BBC America a month before the Frost interview, on October 1:

Former Pakistani Prime Minister Benazir Bhutto said on Monday that she might allow a U.S. military strike inside Pakistan to eliminate al Qaeda leader Osama bin Laden if she were the country's leader.

"I would hope that I would be able to take Osama bin Laden myself without depending on the Americans. But if I couldn't do it, of course we are fighting this war together and (I) would seek their cooperation in eliminating him," Bhutto said in an interview on BBC World News America.

I'm tending to think she misspoke, if this is indeed the case. Either that, or in the instance pointed out above she was telling people what they wanted to hear. Seems unlikely that OBL would have been bumped off in the month between these interviews.

In the Middle East/Southwest Asia, it often takes a long time for dirty secrets to finally leak out. You may remember the charges made in a David Frost interview, with Benazir Bhutto immediately after an assassination attempt in 2011.

Yes, if you play that video, the real story comes out from about 4:00 to 7:00. Who Bhutto is referring as the orchestrator seems like to be 13th Pakistani army chief of staff Pervez Musharrash, and by Bhutto’s account alleges that Omar Sheik had murdered Osama bin Laden sometime before November 2, 2007.

As anyone with an encyclopedia knows, Be4nzir Bhutto was then killed the next month likely because a) she could actually fight terrorism in Pakistan and b ) she outed that Osama bin Laden was already dead in 2007.

Which is why a questioning person would wonder why there was that mysterious chopper crash that killed several members of SEAL Team 6, why bin Laden’s body was hastily dumped in the ocean, and oh, that brings us up to this morning:

No doubt a conspiracy theorist would be able to make up a plot line where Musharraf and associates kept bin Laden on ice, and now that the clock has run out on his “protection/leverage” he’s being hung out for trial. If we knew any dot-connecting conspiricists, of course.

Intriguing to watch how slowly the big picture coves into focus over time in some of this stuff but it sure would explain why bin Laden was recovered from Pakistan and why the US didn’t turn on Musharraf sooner.

Payback’s a bitch and we can’t have loose ends…With this particular loose end still about, we expect to read more unhappy headlines about Musharraf any day now, and before trial.