This or some similar account of Ochs has been posted on RI before, I think. Very interesting shit! Especially interesting seen through my provisional parapolitical Viewmaster. Happened upon it while looking up Lomax, a St. Mark's alum.

http://jfkcountercoup.blogspot.com/2013 ... a.html?m=1
“Joy is a current of energy in your body, like chlorophyll or sunlight,
that fills you up and makes you naturally want to do your best.” - Bill Russell

http://spartacus-educational.com/JFKpaine.htm
“Joy is a current of energy in your body, like chlorophyll or sunlight,
that fills you up and makes you naturally want to do your best.” - Bill Russell

Here, a link that ought to show just how extraordinarily, inexplicably, suspiciously overlooked Michael Paine has been:

I found this, at least, from stillrobertpaulsen. He at least mentions Lyman Paine, mentions that Lyman Paine was a "Trotskyite leader in California", at least.

But that doesn't quite cover it, now, does it? When I think of Trotskyite leaders in California, I think of impotent commie cranks who hand out leaflets in Cambridge and JP but slightly more tanned. But nah. That was not Lyman Paine, was it?

https://en.m.wikipedia.org/wiki/Lyman_Paine
“Joy is a current of energy in your body, like chlorophyll or sunlight,
that fills you up and makes you naturally want to do your best.” - Bill Russell

The proof of a conspiracy, to me:

If there were zero other evidence, if the Zapruder film never existed, if all the witnesses had been struck with immediate and permanent amnesia, if the perpetrators had removed every other single trace of anything that contradicted their preferred narrative, there would still be Michael and Ruth, George, and Dick.

Not quite "a" conspiracy, but conspiracies, plural. Rival, entwined conspiracies. At the very least, two, from opposite directions. A fascist conspiracy and a communist conspiracy. Each hierarchy wanting the president killed, for different reasons, and each hoping to catch/frame the other for it.

This is what I think Nagell discovered. This is how I see it now, anyway.
“Joy is a current of energy in your body, like chlorophyll or sunlight,
that fills you up and makes you naturally want to do your best.” - Bill Russell

What are Ruth and Michael's childrens' names?
The Rich and the Corporate remain in their hundred-year fever visions of Bolsheviks taking their stuff - JackRiddler

Lynn and Christopher.
“Joy is a current of energy in your body, like chlorophyll or sunlight,
that fills you up and makes you naturally want to do your best.” - Bill Russell

Why?
“Joy is a current of energy in your body, like chlorophyll or sunlight,
that fills you up and makes you naturally want to do your best.” - Bill Russell 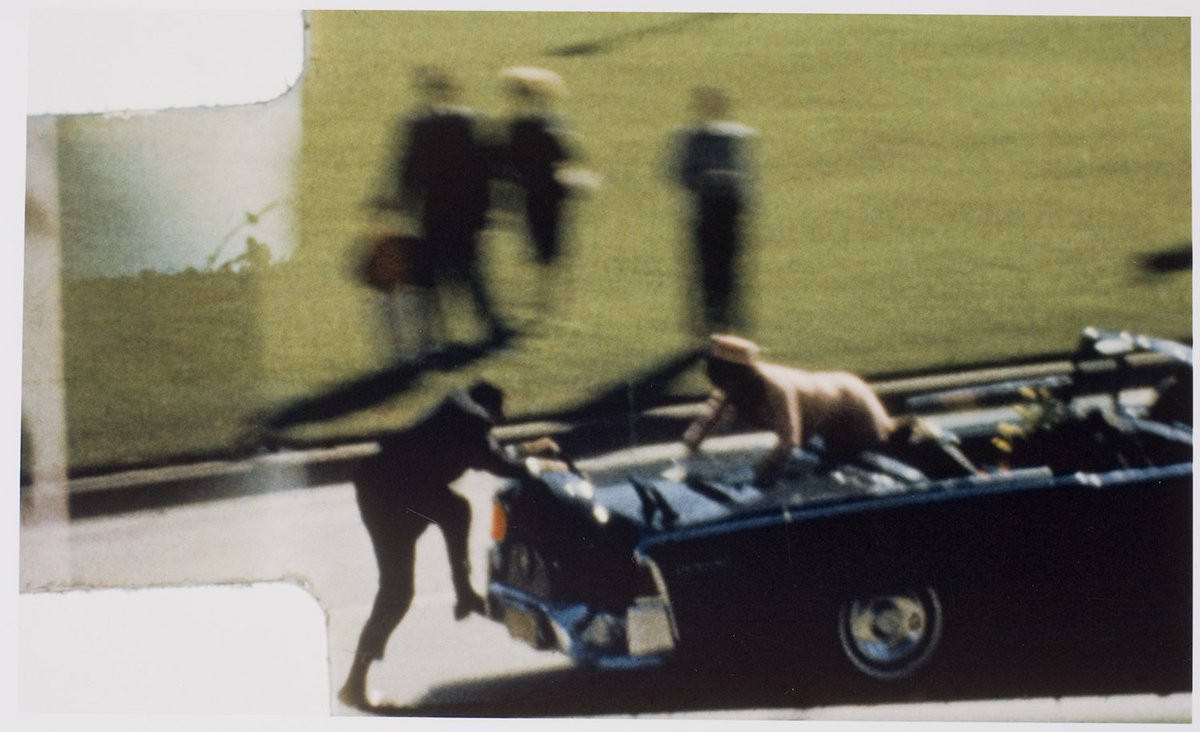 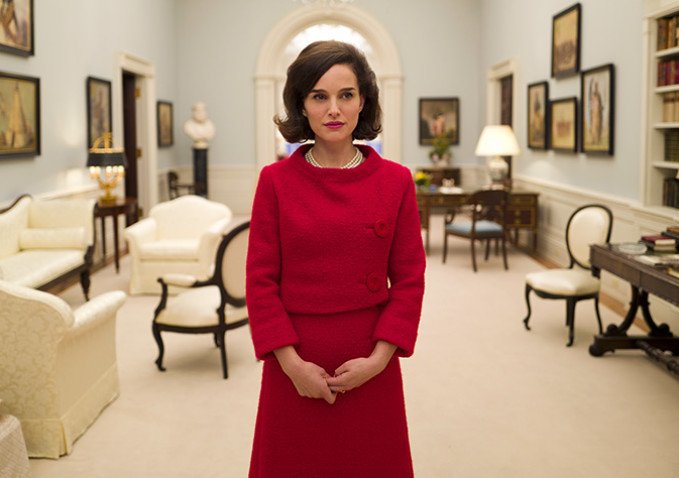 Amazon, Netflix, and other major buyers packed the Olympia theater in Cannes Thursday for a seven-minute promo screening of "Jackie," directed by Pablo Larraín ("No"), written by Noah Oppenheim ("The Maze Runner"), and starring Natalie Portman as Jackie Kennedy.

Portman appears to have turned in a remarkably convincing portrayal of the former First Lady, nailing details like her delicate mannerisms and famously breathy voice. The movie has a grainy texture that's reminiscent of the 1960's, and includes actual film clips from 1963, which has the effect of blurring the lines between archival footage and reenactments.

The movie also stars Peter Sarsgaard as Robert Kennedy and Greta Gerwig as a member of the White House staff. Darren Aronofsky, who directed Portman in 2010's "Black Swan," is a producer.

"Jackie" covers a four-day period in the former First Lady's life, beginning just before the assassination of President John F. Kennedy and focusing on the grief-stricken days that followed...

Opens today and looks like it could be interesting interpretation of icon and myth.

"A psychodrama of hypnotic quality":

"Chilean director Larraín has previously mined the world of political theater in recent films including his Oscar-nominated No and Neruda (his second film this year), yet in his English-language debut has crafted perhaps the best movie so far in his filmography. As he has in previous films, Larraín has a lot of fun splicing historical footage and recreating others (including a sublime reenactment of her famed ““A Tour of the White House with Mrs. John F. Kennedy” television appearance), creating a sense of a lived-in geography, but Jackie goes one step further and raises its degree of difficulty as the movie asserts itself formally as a provocative psychodrama. Even as Jackie intermingles from time to time with brother-in-law Bobby (a wonderfully subdued Peter Sarsgaard) or with kindly aide Nancy Tuckerman (warmly played by Greta Gerwig) or seeks solace with the ears of Catholic priest (John Hurt), the film stays situated, unnervingly so, on Jackie’s determination to enshrine her family’s legacy and her stubbornness in refusing to compromise it."

http://movies.mxdwn.com/reviews/movie-review-jackie/
The greatest sin is to be unconscious. ~ Carl Jung

Interesting new doc on the way... Seems like the Kickstarter is on track to make the goal.

I'd fork the dough if I had it.

In 1963, Ruth & Michael Paine were friends and benefactors of Marina & Lee Harvey Oswald. Marina lived in Ruth Paine's home and Lee visited on weekends and spent the night before the assassination there. Much of the evidence against Oswald was found in the Paine's garage and Ruth became a key witness against him. On the surface, the Paines appear to be just another middle-class couple living in suburban Dallas. But researchers quickly began to uncover some curious facts about them and their role in the assassination case. For instance, both of the Paines come from prominent families with links to the CIA.

The Paines are a sort of crucible for the JFK assassination--those who see a conspiracy generally believe that the Paines must be in on it. And those who believe Oswald acted alone see them as two of the most innocent people you could imagine. Their story offers an illuminating lens through which to explore this history and the conflicting perspectives around it. 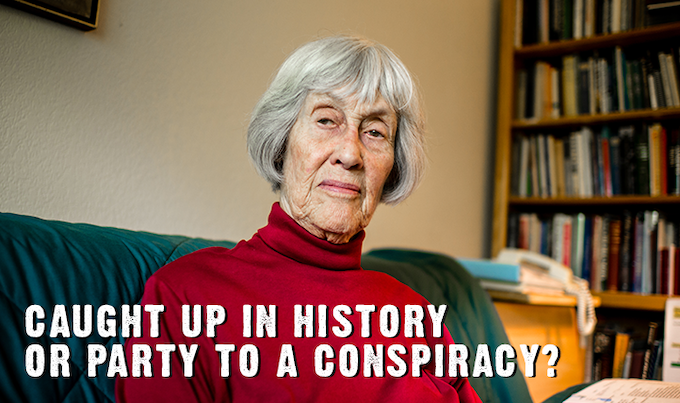 Marc Maron celebrates his 800th episode by coming full circle with Jeff Ross, who informs us that Donald Trump likes to dip things in mayonnaise.

The guys at Vonneguys talk about Kurt Vonnegut the playwright.

In a discussion with David Feldman, Alonzo Bodden describes his first hand knowledge of how the MIC hides the budgets for top secret projects.
.
“Come, & keep your comrade warm.” - Majestic-12 [Bot]

In Russia, podcast listens to you!

“When Trump and Putin meet, if there is laughter, that will be the key. That will be good for America.
Everything will be okay. That is my belief. Of course, I’m a comedian.” - Yakov Smirnoff

Dave Anthony used to have a podcast called “Walking The Room”. Now, he has a podcast called "The Dollop”. Dave shills for a razor company with his son Finn, then he tells a guy named Gary about the time a bunch of cops went on strike in Boston.

Karen Kilgariff talks about how when she was lonely in New York City back in 2010 she used to listen to “Walking The Room”. Then, she talks about the murder of Ronni Chasen.

Comedian’s comedian Bruce Smirnoff talks about the first time he met Donald Trump on his way to a gig in Mar-A-Lago, and how he got to sit in the cockpit of a jet airliner during takeoff in 2002.

This new show on the, cough, History channel is going all-in on the "the Russians did it" angle. Very zeitgeisty. Synopsis: a former CIA agent, who always believed Oswald was the lone gunman but never believed he could have acted alone, teams up with an ex-LAPD homocide detective and an ex-Army Ranger to prove that Oswald had help from the Soviets. Unfortunately, episode 1 is so boring and repetitive that I cannot even recommend it for its propagandistic schlock value.
http://www.history.com/shows/jfk-declas ... ing-oswald
Seeing the world through rose-colored latex.

Evidence of the long overdue erosion of the ridicule factor relating to JFK conspiracy theory...

Philip Shenon wrote:Historians agree that the trip, which Oswald apparently undertook in hopes of obtaining a visa to defect to Castro’s Cuba, much as he had once tried to defect to the Soviet Union, has never been fully investigated.

Besides the laughable unidentified "Historians agree" and "has never been 'fully' investigated," how can you be on the beat for like 20 years and so badly mangle the details of something everyone who cares knows? Seriously.

Anyway. Release of 3600 documents scheduled for October, unless Trump objects.

http://www.politico.com/magazine/story/ ... les-215079
We meet at the borders of our being, we dream something of each others reality. - Harvey of R.I.