The Afghan government has complained that US-led forces do not co-ordinate their operations [File, AFP]

Nine Afghan soldiers have been killed and three others wounded in an air raid by US-led forces in eastern Afghanistan.

The attack came early on Wednesday in Khost, a province near the Pakistan border, in what a US military spokesperson told Al Jazeera was a misidentification.

Qais Azimy, an Al Jazeera producer in Kabul, said, quoting the spokesperson, that US soldiers had not known the Afghan forces were in the area.

A local general who did not wish to be identified condemned the attack, saying that the US forces should have known that the Afghan soldiers were there, as they had been involved in the same operation.

A press statement from the US forces said: "Coalition forces may have mistakenly killed and injured Afghan National Army soldiers last night in Khost province, Afghanistan."

The statement said that a joint investigation with the Afghan government and the Afghan national army would be mounted.

A communique from the Afghan defence ministry detailed the incident: "In an international military air strike at 2am [21:30 GMT on Tuesday] ... nine members of the Afghan National Army were martyred and three others were injured."

Colonel Greg Julian, a spokesman for the US Forces in Afghanistan, confirmed there had been an incident.

"There was an incident and we are getting together with ministry of defence officials to sort out exactly what happened. A joint investigation will be conducted to get to the truth," he said.

There are about 60,000 international soldiers deployed under Nato and a separate force led by the UN in Afghanistan battling Taliban fighters.

The ministry did not specify which one of the deployments was responsible for the strike.

Most of the foreign troops operating in Khost are US armed forces operating under Nato and most air attacks are carried out by US aircraft.

In a separate development, Afghan officials claimed 35 Taliban-linked fighters and three police officers were killed in an attack in the southern Uruzgan province.

Juma Gul Hemat, Uruzgan's police chief, said heavy fighting began on Tuesday and continued into early Wednesday after the Taliban launched an attack on the area.

Hemat said around 100 fighters were involved in the battle.

However, Qari Youssef Ahmedi, a Taliban spokesman, disputed the police chief's figures, claiming they had lost seven fighters and killed 17 policemen in the attack.

http://english.aljazeera.net/news/asia/ ... 16248.html
. is it a wise man, who knows that he is not wise
. it's good to have cynicism but not be cynical
. the more truth you live with, in your life, the stronger you are
. intelligence is merely an attitude to knowledge and learning

A suspected US missile strike has killed at least eight students at a religious school in north-western Pakistan, witnesses say.

The school, in North Waziristan, is close to the residence of a fugitive Taleban leader, Jalaluddin Haqqani, witnesses told the BBC Urdu Service.

At least two missiles, reportedly fired by pilotless US drones, hit the school early on Thursday.

The Pakistani army is investigating the incident. The US has made no comment.

The attack comes hours after the Pakistani parliament unanimously adopted a resolution calling on the government to defend its sovereignty and expel foreign fighters from the region.

The resolution also called upon the government to prevent the use of Pakistani territory for attacks on another country.

There have been persistent US accusations that Pakistan is not doing enough to eliminate Taleban and al-Qaeda sanctuaries in the border region.

Witnesses told the BBC that the missiles destroyed nearly half of the school building in the Dande Darpakhel area near Miranshah, the main town in the North Waziristan tribal region.

At least six people were injured in the attack, witnesses say. It is still not clear whether there were any foreign fighters among the dead students or whether it is linked to Mr Haqqani or his son, Sirajuddin.

Local people have said that most of the injured were local students at the seminary.

Some madrassas in Pakistan have been accused of promoting militancy.

The residential complex of Jalaluddin Haqqani was targeted in a missile attack in September. At least 14 people were killed and 15 injured.

Taleban and al-Qaeda fighters use North Waziristan and other tribal areas to launch attacks in Afghanistan.

Foreign fighters from Uzbekistan, Afghanistan and the Middle East are all thought to be based there. 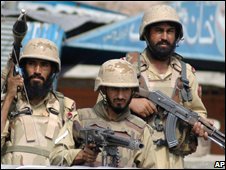 In recent weeks the United States has launched many missile strikes against suspected militant targets in the Afghan border region.

Washington says the strikes are used against militant targets, but correspondents say that intelligence failures have sometimes led to civilian casualties.

Figures compiled by the BBC Urdu service show that some 80 people have been killed in a number of suspected US missile strikes in South and North Waziristan region over the past month.

The United States rarely confirms or denies such attacks.

Tensions between the US and Pakistan have increased over the issue of cross-border incursions against militants by American forces based in Afghanistan.

Pakistani President Asif Ali Zardari has said he will not tolerate violations of his country's territory.

The US state department has affirmed "its support for Pakistan's sovereignty, independence, unity, and territorial integrity".

http://news.bbc.co.uk/1/hi/world/south_asia/7685593.stm
. is it a wise man, who knows that he is not wise
. it's good to have cynicism but not be cynical
. the more truth you live with, in your life, the stronger you are
. intelligence is merely an attitude to knowledge and learning