Joe Flynn was born in 1924, Born November 8, 1924, in Youngstown, Ohio. He went to Northwestern university and began building his career in radio and was a ventriloquist. He served in the Army stateside entertaining the enlisted folks. He decided to make the move to Hollywood and his first onscreen role was a priest in the Bob Hope comedy The Seven Little Foys (55). He continued on doing uncredited character roles until becoming a regular on The George Gobel Show in 1958. He was on the Joey Bishop show in 1961 but there seemed to be a bit of upstaging by Joe and Bishop got rid of him.

He went on to his him most famous role as Captain Binghamton on the TV sitcom McHale's Navy which ended its run in 66. He appeared on Batman in 67 then went on to be one of the most prolific Disney actors appearing in more than 9 movies such as Herbie The Love Bug (69), The Computer Wore Tennis Shoes (70), The 1,000,000 Duck (71), How You See Him, Now You Don't (73) to name just a few. You Baby Boomers also may remember him as King Vitamin, selling that popular kids cereal.

In the early 1970's Joe was a driving force in the Screen Actors Guild to change how actors were paid for residual showings of TV shows, remember Adam and Burt received almost nothing after a few years for the 30 + years of Batman reruns.

Now for a strange twist, Joe was a regular on the Merv Griffith show and he had a habit of making comments like, " I have info that would rock Hollywood should it get out. Shortly after these appearances, Joe was dead. Now should you read IMDB they list his death as a heart attack or other sources state he had a heart attack while swimming in his pool. OK- at the time he had a broken leg and was in a large cast. They found him in on the bottom of the pool held down by the weight of the cast, I doubt he was going for a dip. The truth was never known however Merv Griffith made comments later that he didn't buy the story of Joe's death being "accidental".

12 Notable People Who Died By Drowning

http://listverse.com/people/12-notable- ... -drowning/
We’re in the upside down.

YouTube - RFK Assassination: Multiple Shooters
We’re in the upside down.

If that's not enough for you, the film fails to mention William Harper. Without Harper there may never have been any critical movement in the RFK case. (For those not familiar with the RFK case, this would be like doing a documentary on the JFK case and leaving out both Mark Lane and Arlen Specter.) There is no mention or interview of Scott Enyart, either. Jamie Scott Enyart was the high school photographer who was at the Ambassador Hotel the night of the assassination. He took photos in the pantry while RFK was being shot. Years later he asked to get his pictures back. He never did.

In 1996 he ended up suing the LAPD. (See Probe Vol. 4 #1 and #2) He actually won the case in court. Some extraordinary things happened at the trial. New testimony emerged about how the LAPD actually destroyed Scott's film. About how the LAPD had falsely numbered pieces of evidence in the Sirhan trial exhibit log to hide exculpatory evidence. That even as late as 1995, bullet evidence was being tampered with at the Sacramento Archives. (For actual photo documentation of this tampering see Probe Vol. 5 #3, p. 27.)...

Howard Hughes' right-hand man, Robert Maheu, was believed by J. Edgar Hoover, to be the man behind the RFK Assassination.

Maheu died in Las Vegas a few weeks ago. And an interesting footnote to this is that Iron Bob lost out on the Hughes Empire in a power struggle with the "Mormon Mafia", led by...

Sen Robert Bennett (R-UT)
We’re in the upside down. 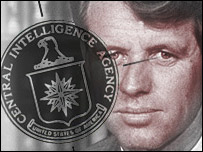 Blowback, on both Kennedy boys, for The Whole Bay of Pigs Thing...

Elders of Zion to Retire

The Wild Bunch: The Elders of Zion, pictured here in younger, more rambunctious days, are hanging up their fezzes and heading south. Noted Morris (third from left), ‘The only thing I’m looking to dominate now is a Piña Colada.’

The Elders of Zion, the venerable and shadowy Jewish organization that controls the international banking industry, news media and Hollywood, has announced that it is disbanding so that members can retire to Florida and live out their golden years on the golf course.

“We had a good run,” said one senior Elder, reminiscing over old photographs of world leaders in his musty, wood-paneled office at an undisclosed location. “Maybe we ran the world for just a little too long. Anyway, now it’s Obama’s problem.”

After a humiliating year left most of its financial holdings, as well as the entire civilized world, on the verge of collapse, the organization has re-defined its mission in terms of bridge games and making it to restaurants for the Early Bird Special...
http://forward.com/articles/103587/

Max Blumenthal: Who's Behind the War on Obama's Intelligence Pick - Democratic Underground

Experts: Sirhan Sirhan Did Not Kill RFK
We’re in the upside down.

Rowan and Martin's “Laugh-In”: a Robert Maheu Production?
We’re in the upside down.

Re: Who Killed RFK? After reviewing the death of famed actress Natalie Wood Wagner in 1981, the Los Angeles County Sheriff's Department ruled it accidental.

Now authorities are reopening the case, according to an announcement from the department issued late Thursday afternoon.

"Recently Sheriff's Homicide Investigators were contacted by persons who stated they had additional information about the Natalie Wood Wagner drowning," according to the LASD.

"Due to the additional information, Sheriff’s Homicide Bureau has decided to take another look at the case," wrote the department.

The actress drowned on Nov. 29, 1981, while boating off Catalina Island with her husband Robert Wagner and actor Christopher Walken.

The Los Angeles Times is reporting that homicide detectives want to talk to the captain of the boat because of comments he had made recounting the case on its 30th anniversary.

Sheriff Lee Baca told the Times the captain made comments "worthy of exploring” but did not elaborate.

Late Thursday, Robert Wagner released a statement through his publicist.

"Although no one in the Wagner family has heard from the LA County Sheriff’s department about this matter, they fully support the efforts of the LA County Sheriff’s Dept. and trust they will evaluate whether any new information relating to the death of Natalie Wood Wagner is valid, and that it comes from a credible source or sources other than those simply trying to profit from the 30-year anniversary of her tragic death," the statement said.

Wood appeared in more than 56 movies and was nominated for three Academy Awards, according to the Official Natalie Wood website.

Born Natalia Zakharenko in San Francisco, Wood became a child star at age 4 after playing the role of Susan Walker in “Miracle on 34th Street.”

Among the other classic films she went on to star in were "West Side Story" and “Rebel Without a Cause.”