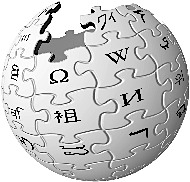 Winston Smith, the protagonist in George Orwell’s “1984,” worked at a government job he hated, rewriting history to conform to current propaganda imperatives. This week, a group called Wikileaks asserted that the United States military appeared to have a Winston Smith of its own at the Guantánamo Bay naval base, mucking about with the way Wikipedia and news sites portray the base and, curiously, posting odd assertions about Fidel Castro.

Julian Assange of Wikileaks laid out evidence on the group’s web site Wednesday indicating that computers belonging to the base’s Joint Task Force-Guantánamo command were used for the suspicious online activity, including:

Mr. Assange’s report caught the attention of, among other news outlets, The Daily News of New York, which wrote about the situation on Thursday.

A denial followed a day later from Lt. Col. Edward Bush, a spokesman for the command’s public affairs office, The News reports today:

“There has been no attempt to alter/change any information that has been posted anywhere,” Lt. Col. Bush said in the statement e-mailed to us. “That would be unethical.”

Bush said in a subsequent phone call that there’s no way to know if any of the 3,000 uniformed military at Gitmo was responsible for the documented changes, but he promised his public affairs staff was not behind it. He also blasted Wikipedia for identifying one sailor in his office by name, who has since received death threats for simply doing his job - posting positive comments on the Internet about Gitmo.

The Wikileaks group’s main purpose is to create an “uncensorable” version of Wikipedia where people around the world could post leaked documents and other things governments didn’t want seen, without fear of the material being suppressed or the source being traced. So Mr. Assange and his colleagues have an obvious interest in exposing government attempts to manipulate popular Internet sites like Wikipedia and Digg for propaganda purposes.

There is nothing new about self-serving alterations to Wikipedia entries, of course. Nearly anyone can edit nearly any Wikipedia page, because the site depends on the larger community of users to eventually spot and correct errors and distortions that may be inserted into an entry — a process that may work well enough with simple, uncontroversial facts but runs into a lot more trouble when political, religious, financial or personal agendas are at stake.

Still, it never looks good to be caught Winston Smith-ing it on the Internet, least of all for the American military, which has gotten one black eye after another over its information programs. And just as Orwell’s character found out, escaping detection is harder than it seems.
http://thelede.blogs.nytimes.com/2007/1 ... anamo-bay/ 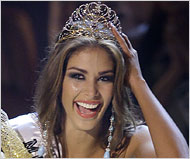 According to the Web site of the U.S.O., which arranged the visit, the Miss Universe Organization made the decision to “deploy Crystle Stewart, Miss U.S.A. 2008, and Dayana Mendoza, Miss Universe 2008, to Guantánamo Bay, Cuba, to visit troops as part of a U.S.O./Armed Forces Entertainment tour.”

Ms. Mendoza, who competed as Miss Venezuela, has a blog on the pageant’s Web site, and this account of the visit appeared there last Friday, after her deployment:

This week, Guantánamo!!! It was an incredible experience.

We arrived in Gitmo on Friday and stared going around the town, everybody knew Crystle and I were coming so the first thing we did was attend a big lunch and then we visited one of the bars they have in the base. We talked about Gitmo and what is was like living there. The next days we had a wonderful time, this truly was a memorable trip! We hung out with the guys from the East Coast and they showed us the boat inside and out, how they work and what they do, we took a ride around the land and it was a loooot of fun!

We also met the Military dogs, and they did a very nice demonstration of their skills. All the guys from the Army were amazing with us.

We visited the Detainees camps and we saw the jails, where they shower, how the recreate themselves with movies, classes of art, books. It was very interesting.

We took a ride with the Marines around the land to see the division of Gitmo and Cuba while they were informed us with a little bit of history.

The water in Guantánamo Bay is soooo beautiful! It was unbelievable, we were able to enjoy it for at least an hour. We went to the glass beach, and realized the name of it comes from the little pieces of broken glass from hundred of years ago. It is pretty to see all the colors shining with the sun. That day we met a beautiful lady named Rebeca who does wonders with the glasses from the beach. She creates jewelry with it and of course I bought a necklace from her that will remind me of Guantánamo Bay

I didn’t want to leave, it was such a relaxing place, so calm and beautiful.

That glowing account of Ms. Mendoza’s visit to the U.S. Naval Station at Guantánamo Bay is unlikely to please Hugo Chavez, her country’s president. Mr. Chavez, who reportedly called Ms. Mendoza to congratulate her when she won the Miss Universe crown last year, recently called on the United States to “return Guantánamo and Guantánamo Bay to the Cubans” after closing the detention facility there.

Mr. Chavez, who is close to the Cuban leadership, may now be rethinking the praise he heaped on Ms. Mendoza on Venezuelan television last year, when she returned to Caracas with the crown:
http://thelede.blogs.nytimes.com/2009/0 ... uantanamo/
We’re in the upside down.

“A crown is merely a hat that lets the rain in.”--Frederick the Great
We’re in the upside down.