He was a good man in his private life as well, and did a number of charitable deeds that aren't part of the public record.<br><br>-Sepka the Space Weasel <p></p><i></i>

Anderson gave up his syndicated Washington Merry-Go-Round column at age 81 in July 2004, after Parkinson's disease left him too ill to continue. He had been hired by the column's founder, Drew Pearson, in 1947.

The column broke a string of big scandals, from Eisenhower assistant Sherman Adams taking a vicuna coat and other gifts from a wealthy industrialist in 1958 to the Reagan administration's secret arms-for-hostages deal with Iran in 1986.

It appeared in some 1,000 newspapers in its heyday. Anderson took over the column after Pearson's death in 1969, working with a changing cast of co-authors and staff over the years.

A devout Mormon, Anderson looked upon journalism as a calling. He was considered one of the fathers of investigative reporting, renowned for his tenacity, aggressive techniques and influence in the nation's capital.

Anderson won a 1972 Pulitzer Prize for reporting that the Nixon administration secretly tilted toward Pakistan in its war with India. He also published the secret transcripts of the Watergate grand jury.

Such scoops earned him a spot on President Nixon's "enemies list." Watergate conspirator G. Gordon Liddy has described how he and other Nixon political operatives planned ways to silence Anderson permanently -- such as slipping him LSD or staging a fatal car crash -- but the White House nixed the idea...

'If that was the way President Kennedy wanted it, Cuba could engage in the same tactics'. The result was that Castro infiltrated teams of snipers into the US to kill Kennedy".

Morgan took the story to Anderson and Drew Pearson. The story was then passed on to Earl Warren. He did not want anything to do with it and so the information was then passed to the FBI. When they failed to investigate the story Anderson wrote an article entitled "President Johnson is sitting on a political H-bomb" about Roselli's story.

It has been suggested that Roselli started this story at the request of his friends in the Central Intelligence Agency in order to divert attention from the investigation being carried out by Jim Garrison...

For example, they were preparing blueprints for the burglarizing of Watergate and the bugging of George McGovern headquarters; they were perfecting schemes to burglarize the offices of Daniel Ellsberg's psychiatrist, to recruit call girls who would romance Democratic party leaders and report back the pillow talk, to forge documents framing President Kennedy for the murder of President Diem, to fabricate a new version of Chappaquiddick. The operatives were occupied not only with conceiving and planning these vaulting designs but in making formal presentations to the Attorney General of the United States and various high aides to the President - presentations replete with elaborate charts so that busy Nixon proconsuls could get a quick grasp of the finer points of the felonies within their purview...

As it happened, I was personally acquainted with some of the Waterbuggers. Frank Sturgis, a soldier of fortune who had roamed the world in search of danger and excitement, had been a friend of mine for years. I had written about his exploits fighting first for and then against Fidel Castro. Sturgis introduced me in Miami to Bernard Barker, a short, swarthy swashbuckler who was known to his associates as Macho (he-man). Both of them spoke of Eduardo, their CIA superior during the Bay of Pigs, who I realized much later was E. Howard Hunt. They were a collection of romantics, forever seeking adventure, forever finding misadventure...

From yesterday's weekend All Things Considered, about journalist Jack Anderson:


Mr. FELDSTEIN: Well, it's pretty wild, but it's true. The CIA started spying on Anderson under Nixon which was illegal, and Anderson found out about it and he sicced his nine kids--he's a devote Mormon and has nine children--on the CIA agents and they waved and let the air out of the tires of the agents and made sport of it all. So everything Nixon tried, you know, didn't seem to work and finally he turned to smearing him sexually and an assassination plot.

NAYLOR: Now what did the assassination plot involve? I mean, was this something that Nixon was directly involved with?

Mr. FELDSTEIN: We don't know. Here's what we do know--and it's been really interesting. I've been going through the National Archives documents on this and the White House tapes. We do know that E. Howard Hunt and G. Gordon Liddy, two names that would become famous a few weeks later during the Watergate break-in when they were arrested as part of that, secretly met at The Hay-Adams Hotel in March of 1972, a block from the White House, and they discussed rubbing out Jack Anderson, and they discussed various ways they were going to kill him. First, they talked about putting LSD in his drink. The trouble was as Mormon and a teetotaler, he didn't drink alcohol. So that was out. So then they talked about making him crash in an automobile accident, but they would have to go to the CIA and use a special car for that. So finally G. Gordon Liddy volunteered to kill Anderson himself personally by knifing him, slitting his throat, and staging it as a mugging that would look like a Washington street crime. At the last minute, this assassination plot was aborted, and a few weeks later, the men were arrested in the Watergate break-in and never had a chance to put their plan into operation.

John Dean: "If Teddy knew the bear trap he was walking into at Chappaquiddick" -- - Democratic Underground 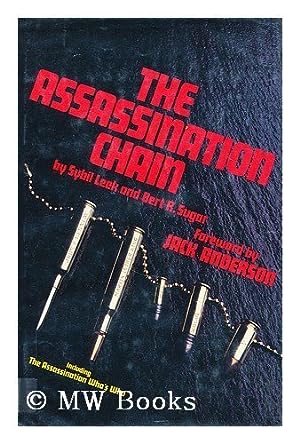