Truth, Light, & The Face on Mars

Truth, Light, & The Face on Mars

I registered w/ this forum a few months ago, but a number of personal trials kept me from posting. As it stands now, some things are sorted out and I've time.

Through a method of applied precision geometry I developed utilizing Photoshop 7.0, I have discovered many exacting truths and come to a few inescapable conclusions regarding Cydonia & the Face on Mars.

The most profound being that the Face doesn't just mean something, it means everything. It is the Way, the Truth, & the Light.

Another major and inescapable conclusion...

The Battle of the Face on Mars.

In order to fully comprehend how I arrived at the above sequencing and interpretation of the above reflections, one will need to read all of the web pages linked two clicks in from my home page.

There is a lot to read and plenty to consider. Unfortunately, as is true with most worth while things, there is no quick and easy way.

However, in order to quell any suspicions that I'm only here to 'spam', I'll offer my 'core premise' here and hope that some of you will follow up with the rest of my research.

Knowing the Gizamids, Teotihuacan, ancient and modern art, cities, etc... are all intentionally and precisely aligned according to Earth's True N/S/E/W grid, should we not expect the same kind of accuracy from the layout of Cydonia if it is indeed artificially constructed? Shouldn't we expect it to be aligned in a precise and meaningful way to Mars' True North?

Of course we should.

The question is... how? And more importantly... how might one be able to prove it?

At this point, I should probably note that until ~2 years after I started publishing my work to my website, ALL available data, be it MSSS, THEMIS, Viking, ESA, etc... was conspicuously missing the customary North notation. Feel free to search this fact out for yourselves.

As it turns out there was a reason for this omission of T. North which I describe and illustrate in detail during my website presentation.

When I first started, regarding any possible connection between the geometry and Mars' T. North, the only real assumptions I had available to me to test was the notion that the above space agencies were presenting and orienting their images according to custom... T. North being straight up.

My other testable assumption was given by Erol Torun through S.V. McDaniel in his book The McDaniel Report. The same claim is also made by Richard Hoagland in his book Monuments of Mars. In their detailed analyses, they state that the western buttress of the D&M pyramid is aligned precisely to Mar's T. North.

With regards to the Face and it's apparent bifurcated appearance:

Given the fact that fusion in art is nothing new...

... it is reasonable to assume there might be something to the orignal assertion that the Face is a half human/half feline Sphinx.
Especially if the reflection correlates precisely within the geometric framework I've begun to develop with the above 60 degree D&M/Face/City Square relationship.
This first reflection was done utilizing Viking image#70a13

The next two reflections were done utilizing MSSS MOC data.

(this final reflection and overlay comparison is taken from Enterprise Mission's website)
(Incidentally, I can also conclusively prove... through the geometry... that Dr. Malin published falsified orthographically rectified data of the Face.)

All bias aside, a fair trace by myself (in black) compared to that of a fair and honest trace of an ardent skeptic (in red) produced nearly the same result which reinforces the notion we're all in agreement, at least, of what's actually there.

So there's my core premise in a nutshell.

It led me to many astonishing and meaningful reflections, like the follwing two, which are all inexorably connected through the geometry; 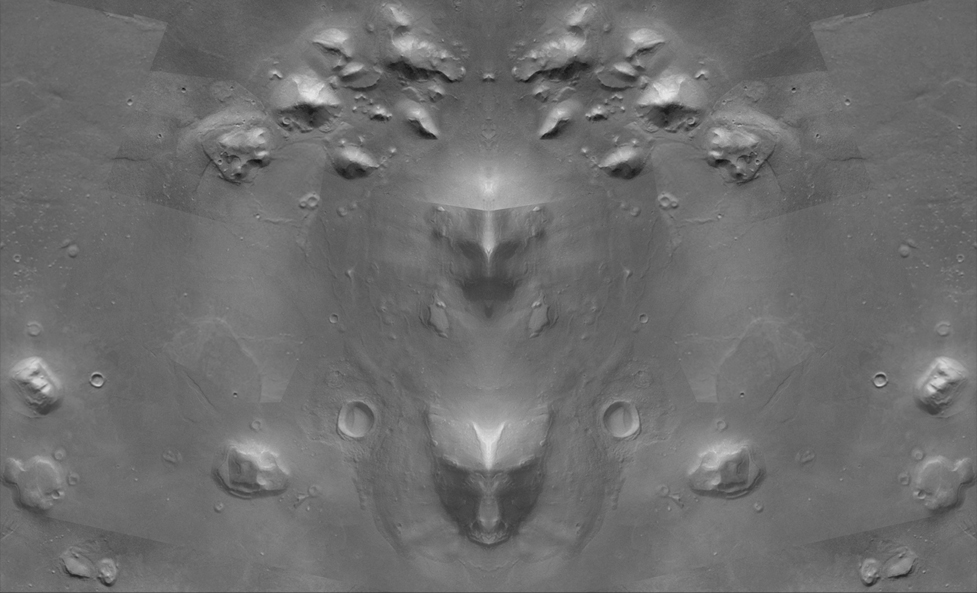 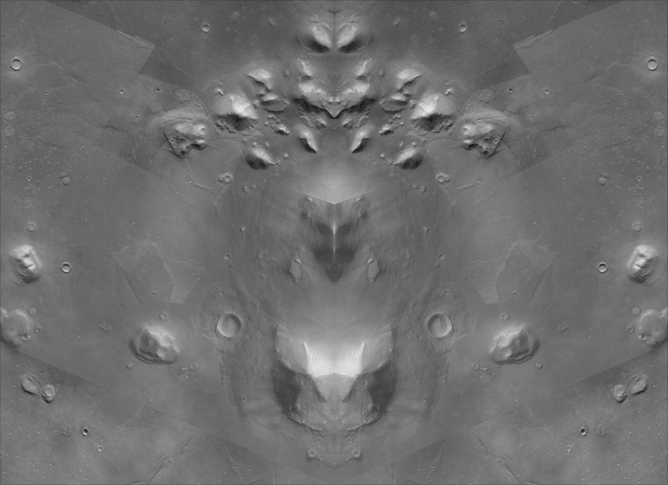 My website is http://www.maxtheknife.com
The 'meat' of my presentation can be found 2 clicks in from there.

Thanks in advance for your time and consideration.
Last edited by MaxtheKnife on Sat Jan 09, 2010 3:35 pm, edited 1 time in total.
The Face on Mars doesn't just mean something, it means everything. It is the Way, the Truth, & the Light.

Max, you'd get more responses if this were posted in the gereal discussion forum, but thanks for the post.

The reflections are certainly beautiful in their way. Do you have any opinion on the estimated age of these proposed artifacts?
The most dangerous traps are the ones you set for yourself. - Phillip Marlowe

Max, you'd get more responses if this were posted in the gereal discussion forum

Ok, thanx.. but I suppose I'll have to leave the discretion of moving it up to the mods now.

Do you have any opinion on the estimated age of these proposed artifacts?

Given Mars' rather large and long obliquity cycle, I find it difficult to imagine the Monuments of Cydonia are any older than ~10,000 years.

Mind you that is speculation. I'm quite prepared to be proven very wrong about that.

Given my admittedly limited and general knowledge about celestial mechanics and the incredibly complicated geometry involved, I have many questions and inquiries in to people who could offer serious insight to the validity of my opinion on this matter.

Hopefully their silence will be broken soon and they'll weigh in publicly.
The Face on Mars doesn't just mean something, it means everything. It is the Way, the Truth, & the Light.

Just some unsolicited feedback about your site: The contrast of white text on black background makes your site nearly unreadable, for me at least. Gives me a headache.
"I’ve just completed Mike’s Nature trick of adding in the real temps to each series for the last 20 years (ie from 1981 onwards) amd from 1961 for Keith’s to hide the decline."

Duly noted, ty.
The Face on Mars doesn't just mean something, it means everything. It is the Way, the Truth, & the Light.

not good for reading

Thanks for coming by

Quite a few views, but not much conversation... that concerns me.

I encourage anyone and everyone to put their hands on the geometry.

My work is verifiable which means each of you can discover the truth for yourselves.

The truth being... the only way to discover the truth is by the light cast upon the Face on Mars. 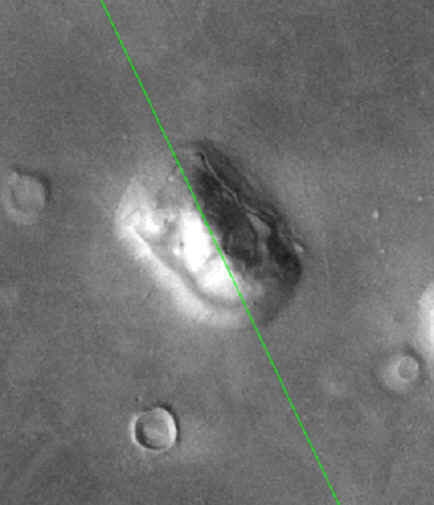 Link to full context w/ side by side comparisons ~8mb

Truth points through The Face on Mars... 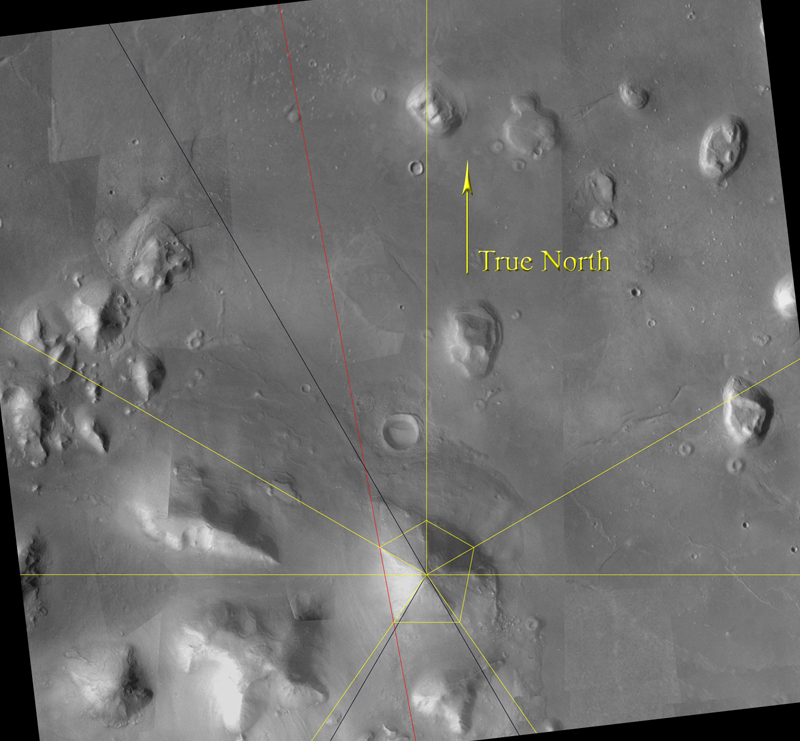 In part because you asked and in part because I gave you such a half ass answer, I've included a more detailed explanation in a long overdue revised edition of my Truth & Light presentation.

I hope you don't mind, but rather than copy and past it all here, I'll just give you the link.

The section on dating comes into play towards the end.
The Face on Mars doesn't just mean something, it means everything. It is the Way, the Truth, & the Light.

It also looks like a vulva at times. why discount that? I mean, let's face it. chicks give birth.

that's pretty important and aside from all the patriarchy that has come to dominate our planet from before recorded history, I'd say that it warrants looking in to.

just my two feminist cents. plus I'm on an anxiety surge.. so you know, take it for what it's worth, and welcome.
Satire is a sort of glass, wherein beholders do generally discover everybody's face but their own.-- Jonathan Swift

When a true genius appears, you can know him by this sign: that all the dunces are in a confederacy against him. -- Jonathan Swift 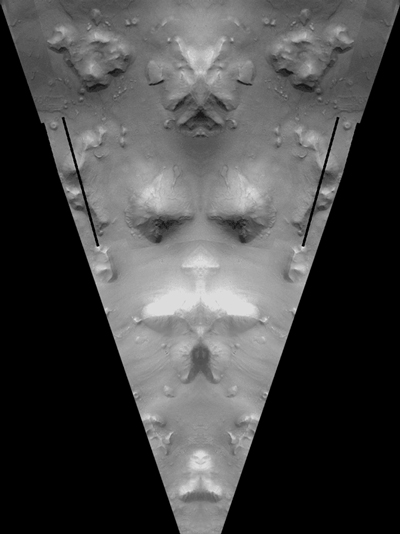 The same feature is also the Burning Heart of Cydonia, aka, Isis.

The Face on Mars doesn't just mean something, it means everything. It is the Way, the Truth, & the Light.

I've updated The Dragon with an important post re 2012 and the connection to Cydonia. (Just click on the 02/12/10 bookmark at the top of the page)

Questions/comments welcome.
The Face on Mars doesn't just mean something, it means everything. It is the Way, the Truth, & the Light.

I felt this needed to be explained in detail once and for all.

I hope this helps clarify any issues some of you may have.

The Face on Mars doesn't just mean something, it means everything. It is the Way, the Truth, & the Light.