If you want to follow the whole story start here and read all of the way to here. It's a short story but an even shorter version is: Posner is a plagiarist.

Don't let the "Professional Skeptics" at DUJREF know this. Posner's their boy.

rigorousintuition.ca - View topic - Brother of Afghan President Is on CIA Payroll
We’re in the upside down.

Cannonfire: Read the Wikipedia entry on Posner. Most of it is sheer puff... 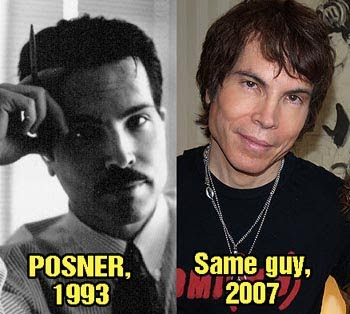 Read the Wikipedia entry on Posner. Most of it is sheer puff, obviously supplied by Gerry himself: ""After Case Closed, everyone thinks Oswald did it," wrote Newsweek." (This is true, if you define "everyone" so as not to include the vast majority of the American public.)

For a brief time, the Posner entry on Wikipedia offered a lengthier account of the man's journalistic sins. A link went to this Cannonfire post, largely written by Greg, who documents not just Posner's penchant for plagiarism but also his habit of altering quotations.

Slate's Jack Shafer, considered citable by Wikipedia, worked to no small degree from Greg's material. Greg, speaking for himself, is considered unreliable -- but Greg as filtered through Shafer is considered reliable. Can you explain that situation to me?

Wikipedia's head honchos told Greg that it has a policy against citing non-mainstream sources, such as blogs. This blog especially.

Wikipedia says that it applies the "no-blogs" policy with particular strictness when it comes to entries on living individuals. Actually, I can understand the rationale for this decision: No-one wants Wikipedia to turn into a trash-heap filled with waspish, vengeance-fueled personal attacks.

It is also pretty clear that Wikipedia does not want to cede territory to anyone who believes that JFK was assassinated as a result of a conspiracy. Believe it or not, I also have some sympathy for this attitude. Although I am convinced that a conspiracy took place, I also know the JFK assassination "buff" community pretty well. That community is filled with people who are contentious, paranoid and downright obnoxious. If Wikipedia's editors did not keep them on a short leash, the results would be grim.

But Gerry Posner presents us with a special case.

Critics of Case Closed were able to pinpoint at least three instances in which Gerry pretended to have conducted interviews with key witnesses with whom he never actually spoke. Wikipedia's profile of Posner does not mention that outrageous breach of ethics, and the editors will not allow you to rewrite the entry in order to include this information.

That book has many other problems. I am not talking about disagreements over the interpretation of evidence; I am talking about serious issues of journalistic integrity. For example, the hardback edition implies that Posner commissioned a scientific study which was actually conducted for a television program; a lengthy explanatory footnote was added to the softcover edition.

That's why the JFK "buffs" have always reviled Posner in a way they do not revile other "Oswald did it" writers, such as Vincent Bugliosi and David Belin. Although we do not agree with Bugliosi, Gerry Posner belongs in a class by himself.

(Serious questions have surrounded Posner's other works. One of these days, I'll deliver that long-promised piece about his book on Mengele.)

My point is this: If Posner's earlier examples of shoddy journalism had "gone on the record" -- if, for example, Wikipedia's entry had mentioned something about the false interviews -- then The Daily Beast would never have hired Posner. And the publishers of Miami Babylon (Posner's most recent book) might have been spared some humiliation as well. (This blog will probably publish a piece about that book soon.)

Consider this hypothetical poser: Even if Cannonfire were able to prove that Gerry plagiarized portions of his most recent book, how could we get the information into Wikipedia? How can we get the truth onto the record?

Doing so would be difficult.

It's not just a matter of factual accuracy. The facts must be published in an acceptable forum. Anyone amending the Posner entry cannot cite Cannonfire or any other blog, even one that maintains a good reputation. Yet Wikipedia will publish what Posner has to say about himself -- even though Posner is a confessed plagiarist, and even though Posner alters quotes.

All of which brings us back to dear old Andy Breitbart.

Wikipedia, which does not consider Cannonfire worthy of citation -- and which seems to have a similarly dismissive attitude toward Brad Friedman's blog -- has no problem citing Breitbart's Big Government website. Wikipedia also cites Breitbart's other "Big" sites...

I'm glad he found an old picture for comparison. When I saw Posner on TV a couple of years ago, I thought I'd gone crazy. I wondered if he'd written "Case Closed" when he was 20.
We meet at the borders of our being, we dream something of each others reality. - Harvey of R.I.

is he related to Vladimir Posner? That guy was all over the TV in the 80's right up to the end of the cold war. Then he disappeared in the 90's, I smelled CIA real strong with that guy! He was so slick he coulda been a double or a quadruple KGB/CIA/KGB/CIA, whom ever gave the most airtime. I put him in a league with our friend Z. Brzezinski. Prove me wrong RI!
)'(

anothershamus wrote:is he related to Vladimir Posner? That guy was all over the TV in the 80's right up to the end of the cold war. Then he disappeared in the 90's, I smelled CIA real strong with that guy! He was so slick he coulda been a double or a quadruple KGB/CIA/KGB/CIA, whom ever gave the most airtime. I put him in a league with our friend Z. Brzezinski. Prove me wrong RI!

Disgraced Miami Beach author Gerald Posner is desperate. He apparently whitewashed an account of his serial plagiarism on his Wikipedia page, then threatened Miami New Times with a lawsuit for writing about it. And now he's retained an 83-year-old lawyer infamous for publicizing the "grassy knoll" theory of John F. Kennedy's assassination, a conspiracy Posner refuted in his most famous book.

To review: Posner, who has penned 11 books including a Pulitzer finalist, resigned as investigative writer for the Daily Beast website this past February. He acknowledged lifting copy. The Miami Beach author and former Wall Street attorney also admitted stealing scores of passages for his most recent book, Miami Babylon.

Now a new review of Posner's work shows much more. A 48-year-old Wisconsin doctoral student named Greg Gelembiuk has discovered Posner lifted 35 passages in two books: his 2003 take on the 9-11 attacks, Why America Slept, and Secrets of the Kingdom, a 2005 tome about Saudi Arabia.

Miami New Times provided Poynter Institute senior scholar Roy Peter Clark with three lengthy passages Posner apparently lifted in the 9-11 book. "This constitutes plagiarism by any definition I can think of," he says. "The capturing of someone else's material that is this extensive cannot, in my opinion, have been done accidentally."

The evidence (posted in full here) contradicts Posner's rationale for his crimes in Miami Babylon. This past March 16, he told New Times he'd used a new system of "trailing endnotes" in Babylon, which he claimed had led to attribution problems. He said he hadn't used that system in past books.

Posner's lawyer, Mark Lane, is best known for writing Rush to Judgment, the mother of all JFK-conspiracy books. He declined to answer specific questions about the plagiarism, but cited unnamed "vulgar and threatening attacks" by the paper on Posner. He claimed the newspaper "interfered" with Posner's relationship with his publishers, Random House, by providing them with the latest evidence...

Gerarld Posner + Mark Lane = Teammates ? - The Education Forum
We’re in the upside down.

Peculiar Posner or as The Exiled puts it: Serial Plagiarist Gerald Posner Claims He Represents Afghan Leader’s C.I.A.-Sponsored Younger Brother…Posner Fired From Daily Beast For Plagiarizing Other Journalists’ Works…Posner Is Author Of Lone-Assassin-Theory Books On JFK, MLK…And He Looks Like A Goat-Fucker, But That’s Purely Coincidental…

As the state readies itself for a sweeping fascist shift, a few Posners will get caught rolling in someone else's pile. He will be useful down the line to maintain the illusion that there are any journalistic standards left at all in mass media.

It's like I read the sunday NYTimes and the best piece of writing was in a fluff article on William Shatner where he was quoted as saying "I went to a halloween party wearing a William Shatner mask and nobody knew who I was." Though I am nostalgic for the days of Beany and Cecil, I know there is no going back; that the Mahdi will not return, nor will Jesus, the counter culture and that a Beatles reunion is almost as completely out of the question as a majority of a democracy believing JFK, MLK, RFK were all greased by the CIA and they actually do something about it. Almost, though the beatles reunion could be more likely.
" Morals is the butter for those who have no bread."
— B. Traven

Operation: To Kill a Mockingbird

Gerald Posner was once the darling of Warren Commission defenders, embraced by all the major media. Eventually his sloppy research caught up with him and he was fired from his job as a journalist.

Posner is now a named defendant in a lawsuit by Harper Lee against her former agent, a Mr. Pinkus.

Acclaimed writer Harper Lee, the 87-year-old author of To Kill a Mockingbird, filed a lawsuit against her literary agent Friday claiming he took advantage of her age and ill-health to steal her royalties...

Re: Operation: To Kill a Mockingbird

Cheeses Christ. This guy's scumbaggery knows no freaking bounds, does it?!

Gerald Posner was once the darling of Warren Commission defenders, embraced by all the major media. Eventually his sloppy research caught up with him and he was fired from his job as a journalist.

Posner is now a named defendant in a lawsuit by Harper Lee against her former agent, a Mr. Pinkus.

Acclaimed writer Harper Lee, the 87-year-old author of To Kill a Mockingbird, filed a lawsuit against her literary agent Friday claiming he took advantage of her age and ill-health to steal her royalties...