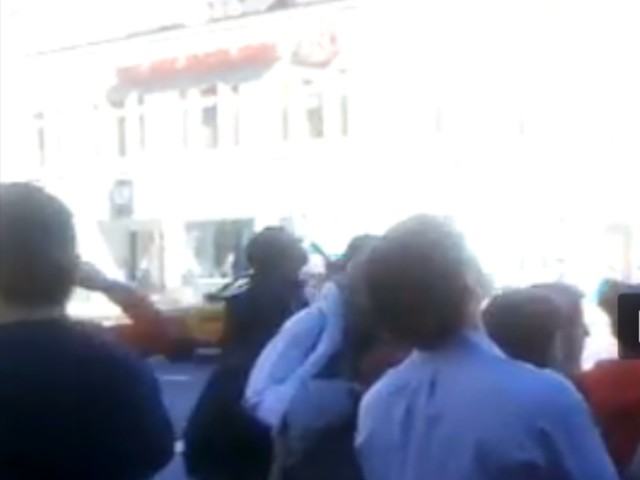 New Yorkers looking up at the sky at mysterious flying objects Wednesday.

MANHATTAN — Like a scene out of a blockbuster science fiction movie, crowds of New Yorkers stood motionless on sidewalks in Chelsea on Wednesday, staring up at the sky at what some believed was a cluster of UFOs, according to several published reports.

About a dozen silvery, balloon-like objects were spotted by several witnesses floating over W. 23rd Street around 1:30 p.m., the New York Post reported.

An amateur videographer, who posted footage on ImageShack under the name evrybdyhateslex, narrated what he saw as he trained his camera on a group of startled pedestrians.

"It's pandemonium 2010 right now," he said. "There are UFOs flying above the city.... Before there was only one, now there's like four. I'm freaked out."

The FAA was flooded with phone calls about the mysterious flying objects but after reviewing radar data, the agency reported nothing out of the ordinary, reported the Daily News.

"Some people saw something described as yellow with blue lights surrounding it," said FAA spokesman Jim Peters told the Post.

Some witnesses believed it was just a weather balloon, while others thought they were watching a UFO.

"There was something weird about it," witness Pete Bryant, 32, told the Post. "Light just doesn't reflect off balloons like that."

While no official explanation has been given for the mysterious sighting, Bryant thought it was fitting for a UFO to be seen in the Big Apple.

"If Martians were to land anywhere, New York is a much better location than some backwoods town in the Midwest." 8.4 million people, alll carrying cameras, and this is the best shot I can find.
The most dangerous traps are the ones you set for yourself. - Phillip Marlowe

...according a September 13 press release for the book Challenges of Change by retired NORAD officer Stanley A. Fulham, he predicted that a fleet of UFOs would descend upon Earth's major cities on Wednesday, October 13.

Fulham stated the extraterrestrials would neither land nor make any communication with Earth on Wednesday. But their presence would be "the first in a series intended to avert a planetary catastrophe resulting from increasing levels of carbon-dioxide in the earth's atmosphere dangerously approaching a 'critical mass.' [...] They are aware from eons of experience with other planets in similar conditions their sudden intervention would cause fear and panic."

He says their contact with Earth is part of their process of leading mankind into accepting the "alien reality and technologies for the removal of poisonous gases from the earth's atmosphere in 2015, if not sooner."

The book also states that with the help of a channeler, Fulham has been in contact with a group known as the Transcendors for more than a decade. He described them as a group of 43,000 eons-old souls, who use their experience and knowledge to provide information to "humans in search of basic realities of mankind's existence." The press release also stated:

The Transcendors reveal through the author crucial information about urgent global challenges facing mankind such as earth changes, international terrorism, worldwide financial collapse and the environmental crisis. One revelation is al Qaeda has a dirty nuclear bomb and WMD, but faces a moral quandary over "containment of collateral damages."

Utilizing the theme of the Four Horsemen as symbolic metaphor, Fulham warns mankind will survive all of these future challenges, except the CO2 pollution of our atmosphere. According to information provided to the author by the Transcendors, the build-up of CO2 pollution is rising 1% annually to a "critical mass" of 22% in which mankind could not survive "without outside intervention."

The FAA also stated Wednesday that after reviewing radar information, they found typical helicopter traffic above on the West Side but could not detect anything unusual that would prompt the avalanche of reports they recieved.

NYPD and FAA officials say if the objects were part of an planned, organized weather balloon release, it it protocol that they are notified in advance. Neither organization recieved alerts. 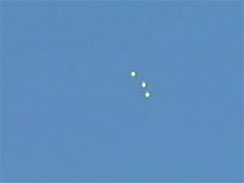 The most dangerous traps are the ones you set for yourself. - Phillip Marlowe

This seems to be growing in its capacity to lure people into the plausibility of it.

It does not matter if it was "real" anymore. It's gone viral and everybody is forming opinions now. That is what we should be on the lookout for. Opinions.

Wow. Based on the pics the pattern formation would appear to be consistent with a lot of the previous orb sightings. That's pretty wild! Looking forward to some actual footage. Thanks cuda for the pix.

I should add, that it is forming subconscious "placemarkers", not opinions -- though there are those too.

Since fucking when have so many people been astonished by the floating of balloons? Since media saturation, I say. The alien/ET question has never been more prevalent. Our entire pop-culture is marinating in it. You can't amaze a kid with a helium balloon anymore, so you amaze them with UFOs. Since everyone is talking about it, it must be at least partially true, no? Take a country with uncertainty about their future and now use the baffledness of said uncertainty and add some UFOs to the mix through all channels of media and going culture.
There is no me. There is no you. There is all. There is no you. There is no me. And that is all. A profound acceptance of an enormous pageantry. A haunting certainty that the unifying principle of this universe is love. -- Propagandhi


This one gives an idea of the amount of commotion this caused.

And as a NYCer, I can tell you that we're too jaded to stop for even a few seconds unless something is REALLY interesting, and the last time I saw this many people standing around looking up was on 9/11.

I don't know what exactly they saw, but it must have been pretty out of the ordinary to draw such attention.

Oh, and for what it's worth, Chelsea isn't a tourist hotbed either.
"Arrogance is experiential and environmental in cause. Human experience can make and unmake arrogance. Ours is about to get unmade."

8.4 million people, alll carrying cameras, and this is the best shot I can find.

Balok's ship from the Corbomite Maneuver:

The photo isn't very convincing. Any video of how this cluster actually moved?

(Not that I have any basis whatsoever, but just for fun I was dreaming up a theory involving a book in search of sales, an announcement by its author that aliens are appearing over big cities on Oct. 13, which just happens to be "Ten Thirteen" to X-Files fandom, the release of a cluster of silver balloons with a small remote-control motor attached, and six apparently unrelated hired soldiers of "viral marketing" placed on the street in Chelsea, all of them suddenly pointing at the sky and delivering carefully crafted exclamations - as well rehearsed soundbites for media like, "New York is already full of aliens, whaddadeywannabe in Podunk for?" But this craziness breaks down at the thought that a legitimate news source like WABC's Eyewitness News would play along in a PR scheme or be duped by one so easily. Apologies.)
Last edited by JackRiddler on Thu Oct 14, 2010 1:54 pm, edited 2 times in total.
We meet at the borders of our being, we dream something of each others reality. - Harvey of R.I.

I was checking out Richard Dolan's (heartbreaking) new site, where the lead article was about the "Bluebeam" predictions for 10-13 and he was expressing bafflement as to where the date came from. I figured everyone knew about Ten Thirteen...I'm re-watching all three seasons of Millennium lately so I see that shit all the time. I figured it was an X-Files in-joke.

As to why Dolan has turned to Stanton Friedman, Jim Marrs and some hollywood pouf named Bryce Zabel, well...that's a whole other Other. Definitely got me sadface, though.

Dolan paid his dues, though...go get that idiot money, buddy, you earned it. Have fun on the other side.

Some random thoughts, as I'm not quite sure what to make of this yet.

Some of the eyewitness testimony suggests the objects were hovering (stationary) for a long time. Not likely with balloons unless they're tethered to something. I haven't seen any video of the objects in motion for more than a couple of seconds. The scant comments reported feature people saying that they're sure it wasn't balloons, which means maybe the movement of the objects was unlike balloons blowing around.

If you go to the video at the bottom of this link:

Check out the nighttime video from the cameraman, which appears to show a row of lights.

Someone should be collecting as much of the video as possible. With so many people watching, and undoubtedly dozens of iPhones and Droids -- not to mention reporters on the scene -- there should be a wealth of video and photos to analyze.

This photo, which isn't time-stamped, is allegedly from balloons being launched in Times Square yesterday:

The connection with the Fulham book/prediction of course sets off red flags. I found an interview with Fulham here:

Users browsing this forum: No registered users and 23 guests