Why the Oscars are a Con

The review collection site, Rotten Tomatoes, was launched in 1999, and has since become a go-to site for film criticism. And in the last ten years, no other Best Picture nominee has received worse reviews than "Extremely Loud and Incredibly Close," which became one of nine films to be nominated for the coveted Academy Award today.

As of today, "Extremely Loud," which was directed by Stephen Daldry and starred Tom Hanks and Sandra Bullock, has a 48% rating on Rotten Tomatoes, with 57 positive reviews at 62 negative ones. However, in this case, the negative reviews are especially loud and incredibly negative. The Onion's AV Club gave the film a very rare "F" grade, calling it an "appalling adaptation," which "processes the immense grief of a city and a family through a conceit so nauseatingly precious that it’s somehow both too literary and too sentimental, cloying yet aestheticized within an inch of its life."

The San Francisco Chronicle called it "thin and uninvolving," and Roger Ebert wrote that "there must be a more plausible story to be told about a boy who lost his father on 9/11. This plot is contrivance and folderol."

Indeed, the critics who disliked "Extremely Loud" were generally offended by the film's saccharine take on the events of 9/11 and even the positive reviews, which mostly lauded the performances of the supporting players like Max Von Sydow, tended to deride the film for plucking too much at the heartstrings. "The film resonates," wrote Bill Goodykoontz in the Arizona Republic, "in spite of the tear-jerking strings Daldry pulls." And the Christian Science Monitor wrote that Daldry makes the mistake of showing bodies falling from the Twin Towers, since it seems "more exploitive than cathartic."

Indeed, no other nominated films in the past ten years aside from "The Reader" (62%) and "The Blind Side" (66%) even received below a 70% on Rotten Tomatoes. Even once the Academy began stretching the list of Best Picture nominees to nine or ten pictures, nothing aside from "Extremely Loud" has dipped below the 60% mark.

rigorousintuition.ca :: Extremely Loud & Incredibly Close
We’re in the upside down.

Re: Why the Oscars are a Con

I actually enjoy watching the Golden Globes as a guilty pleasure, and found very interesting the reaction to the "win" of that Homeland show with Clare Danes. I started a thread about it somewhere, it's a remake of some Israeli show.

Anyway, the response from the crowd was very muted, and barely polite.

I couldn't help but feel that everybody was thinking "oh yeah of course that's the one we have to give them".

Clare Danes won as well, and the response was the same for her.

It was kind of weird.
"He who wounds the ecosphere literally wounds God" -- Philip K. Dick

'Extremely Loud And Incredibly Close': Worst Reviewed Movie Of The Past 10 Years To Receive A Best Picture Nom

Check out this diss:

Brooks’ snubbing made room for Max Von Sydow’s performance as a mute old man in Extremely Loud & Incredibly Close, which showed impressive resilience despite mixed—and in some cases, toxic—reviews and zero year-end awards. To his credit, Von Sydow’s work is the best thing about EL&IC, much like lunch at the hospital commissary is the best thing about radiation treatment. That it scored a Best Picture nomination, too, is a mystery best not pondered.

So I went and read the full spoiler. It's even worse than the extreme puking experience you'd expect. Really, you don't want to know. But a full summary is on Wikipedia, if you must.

Haven't seen them all, but a better picture than Tree of Life is unimaginable in most years. Maybe they'll at least give the director prize to honor Malick.

They weren't going to touch Shame in any way.

Margin Call at least is up for a screenplay prize. You'd never see that in the best picture pool. Too low-budget, too pure in form, too radical on the message, and you have to actually pay attention to understand it.

Re: Why the Oscars are a Con 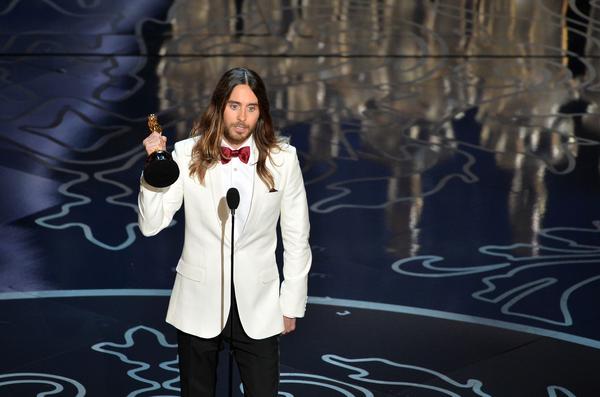 Sorry if this has already been commented on but Jared Leto (who previously portrayed Mark David Chapman) gave an Oscar speech very Spook/1%er friendly. Leto was extremely supportive of regime change efforts in both the Ukraine and Venezuela.

http://www.globalresearch.ca/propaganda ... ns/5372295
"Rigorous Intuition is like the incredibly symbolically twisted and bizarre dream you wake up from..." ---Theresa Duncan

Users browsing this forum: No registered users and 34 guests