I am currently watching television programmes

He's out in 90 days unless they refile. Watch the county do it just to keep being an asshole.

He's out in 90 days unless they refile. Watch the county do it just to keep being an asshole.

Such fantastic news. I got a little choked up. They did that guy so, so wrong.

What's not to like about Night Of? Only up to ep 2 but seems pitch purrfect so far. Nice to have a TV show worth watching that doesn't have subtitles.

Pretty much all the others I've been imbibing are from Europe, mostly Nordic. Here's a few of the best:

^^Cordon is really good (there's also a US remake) and season 2 is on the way. Haven't seen any of the others, but Deutchland 83 is on my list (and hard drive

). I didn't watch Occupied when it aired here since from experience Norwegian television sucks compared to Sweden and Denmark (except maybe Lilyhammer). Is it worth watching?

Also just finished season 1 of Line of Duty and liked it. Will watch the rest after finishing off season 3 of Broen (the Bridge) which is really good.
"I only read American. I want my fantasy pure." - Dave

I cannot stop thinking about last night's episode of Mr. Robot. I really need to rewatch the entire series from start to finish, along with Rubicon.
The Rich and the Corporate remain in their hundred-year fever visions of Bolsheviks taking their stuff - JackRiddler

DrEvil » Wed Aug 17, 2016 5:02 pm wrote: I didn't watch Occupied when it aired here since from experience Norwegian television sucks compared to Sweden and Denmark (except maybe Lilyhammer). Is it worth watching?.

No, I just wanted to get you to waste an hour of your life so I could chortle evilly at my puter, doc!

I'd say it's one of the best on my list...
It is a lot easier to fool people than show them how they have been fooled.

Hah! Too late. I already wasted four hours on it. Gonna watch the rest now.

"I only read American. I want my fantasy pure." - Dave

Just rewatched 1988's A Very British Coup: felt like glimpsing like a brief flicker of light in the darkness. The most truth-confronting film drama ... ever?

Not a trailer: spoiler alert.

A reminder for television viewers that People of Earth airs on Halloween.

I was intrigued by Episode 1... quite a few RI-esque themes. 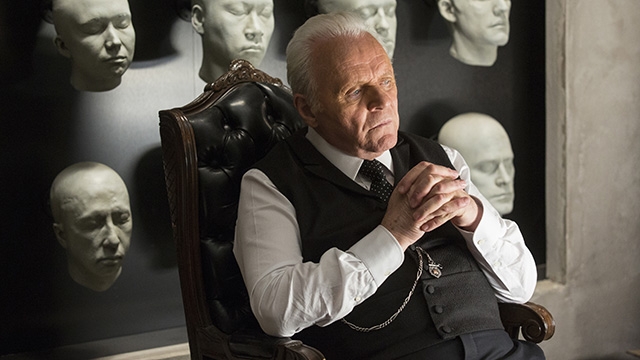 Even if you’ve never seen the original, you will not be surprised to hear that the behind-the-scenes operation sets characters who claim the technology is failsafe against others who think it’s only a matter of time before something goes badly wrong. It’s basically Jurassic Park (which was based on a book by Michael Crichton, who wrote and directed the original Westworld), but with robots in cowboy hats instead of dinosaurs.

Here’s what’s different: in the original movie, the theme park was a revolutionary new leisure attraction. In the reboot, Westworld is 30 years old and struggling to keep the visitor experience fresh. The robots are constantly updated with nuanced emotions, gestures and back stories. They’re capable of participating in increasingly flexible narrative permutations. And don’t expect them to pull off their faces to reveal the circuitry behind. These “hosts”, as they are known, are all 3D-printed sinew. If they weren’t happy to let flies walk across their eyeballs, you couldn’t tell they weren’t human.

Also: in the 1973 film the visitors were the protagonists, flawed but human, in over their heads in a malfunctioning cyberworld. In the series, the guests are reduced to the role of extras – desensitised repeat customers on the fringe of the narrative. In fact, that’s how you can tell they’re the humans. “The first time I played it white-hat,” says one to another on the train ride in. “Family was there, we went fishing, did the gold hunt in the mountains.” On his second visit, he says, he came alone. “Went straight evil. Best two weeks of my life.”

This time around, the heroes are the robots: they are so sophisticated they have reached the level of incipient consciousness, but they’re still referred to as “livestock” backstage. The suffering they endure – every day in Westworld is like a grisly Groundhog Day for the robots – is uncomfortably real, and, thanks to a technical glitch to do with the most recent update – their memories aren’t being completely wiped. Meanwhile, there are mysterious corporate shenanigans back at Westworld HQ, presided over by foul-mouthed, profit-driven Theresa Cullen (Sidse Babett Knudsen from Borgen).

Watching Westworld is a bit like watching someone else play a video game they’ve just bought. The story’s all there, but they keep spoiling it by killing everyone.

There are so many ideas at work that Westworld might easily have succumbed to its own complications, but it rips along, aided by a top-notch cast that includes Anthony Hopkins, Thandie Newton and Ed Harris, who seems to be the sadistic human counterpart to Yul Brynner’s 1973 robot gunslinger. At times the story seemed to be getting ahead of viewers, but that appears to be intentional. I think I’m meant to be confused at this stage.

In the Crichton film, the tourists were the (mostly) likable protagonists. The cast of human characters also included the engineers responsible for the creation and caretaking of the robots—figures out of their depth, perhaps, but in no meaningful way malicious. And there were, of course, the deadly, implacable robots.

In Nolan and Joy’s telling, we again have the morally conflicted middle layer of android-creators and park bureaucrats—by turns hubristic, paternal, and befuddled. But this time out, the sympathetic victims are for the most part the androids, whose memories are erased daily but who begin to retain fragmentary visions of the horrors that are regularly visited upon them. And those horrors are inflicted by the true villains of the show: the human tourists. In perhaps the show’s most wicked inversion, Brynner’s bald, middle-aged gunslinger is explicitly echoed in a figure played by Ed Harris; but whereas Brynner’s character was an android who killed human beings, Harris’s is a human being who takes gruesome pleasure in murdering androids.

Why, after all, would people pay a fortune—one guest cites a rate of $40,000 a day—to immerse themselves in a simulacrum of the lawlessness of the Old West? Westworld answers that they would do so to indulge their otherwise unspeakable appetites for senseless violence and transgressive sex, without moral scruple or legal consequence. The series is remarkably stark in its depiction of the cruelty underlying these appetites. All but vanished are the “shoot-out with a bandito”–type scenarios of the original film. Instead, one bored tourist nails a kindly old prospector’s hand to a table with a steak knife just to make him shut up. Another walks up to an amiable cowboy minding his own business at the bar, shoots him in the back of the head, and crows, “Now, that’s a fucking vacation!”

Yeah I came to this thread to see if anyone had been watching Westworld. Seriously "uncanny valley" stuff. I can't take my eyes off of it.

Saw episode 2 last night. Thandie Newton! Always loved her and never saw enough of her but she had a big part here. The guy who played Evan Rachel Wood's father in episode 1 was incredible. Deserves an award just for that. Must be seen to be believed.

Very slick production values. Hope it lives up to the promise it's built up so far.
"He who wounds the ecosphere literally wounds God" -- Philip K. Dick

The guy who played Evan Rachel Wood's father in episode 1 was incredible. Deserves an award just for that. Must be seen to be believed.

Agreed. I re-watched episode 1 and was transfixed on the scene where he (the 'father') is 'interrogated' by Anthony Hopkins' character after his 'transgression(s)'.

Will be interesting to see how deep they traverse in some of the themes raised/hinted at during the first 2 episodes.

Yep, Westworld has been good. I only got up to Episode 2 before my HBO Now ended. I had to let the account lapse through iTunes so I can reorder it through my Playstation (confusing, I know), and just haven't gotten around to it yet. That scene with the father WAS amazing. I'm also so glad they got Hopkins for his role. I think he's a perfect wolf-in-sheeps clothing; the viewers empathize with him but don't necessarily trust him (my take on it, anyway).

I described Westworld to my wife as a mix between A.I., Jurassic Park, and Groundhog's Day; which I thought was pretty clever on my part

I look forward to the 3rd season of 'The Fall' when it's available on dvd, but Netflix is streaming.

The third (and possibly final) season of The Fall, which has just finished airing on BBC Two in the U.K., comes to Netflix in the U.S. today (Oct. 29, 2016). Fans have had to wait almost two years for this concluding season of the Stella Gibson/Paul Spector storyline, and they’re going to notice some big changes. Compared to the first season, in particular, this is almost a different show.

http://www.forbes.com/sites/neilmidgley ... d477e74e61
The greatest sin is to be unconscious. ~ Carl Jung