Thanks for reminding me that LOBSTER is still active and posting that bit that also alludes perhaps to someone experiencing a possibly related "mystery hum"...

"... the late Anthony Verney's story of ... a tape-recording of a peculiar, unpleasant grinding noise which filled his house night after night."

ST. LOUIS (KMOX) – Some diplomats in Cuba have returned to North America suffering brain damage after a series of attacks, possibly from a sonic device directed at their homes. One expert says it could have been sort of like a very damaging and powerful dog whistle, only aimed at humans.

“If they were able to utilize something at a short range and particularly noxious, it could do a lot of damage to people,” says Dr. Josh Sappington, a SLU Care otologist, specializing in the ear and hearing loss at SSM Health SLU Hospital.

“If they had repeated exposure to it, or sustained exposure to it, that’s not something that the brain and the ears will like for an extended period of time and they could suffer neurological damage,” he says.

In some cases, oral steroids can help with the hearing damage, but Sappington says the more serious brain and nerve damage cases are more concerning with much longer therapy needed.

Thanks for finding and posting this AD:


So who distributed these flyers, and why?

It appears the origin of the flyers came from Targetedjustice.com, a website that delves into conspiracy theories and claims that the government is targeting and controlling individuals psychologically through microwave beams.

One link on the website even allows anyone to download the same exact flyer that was found all over the deputy vehicles. 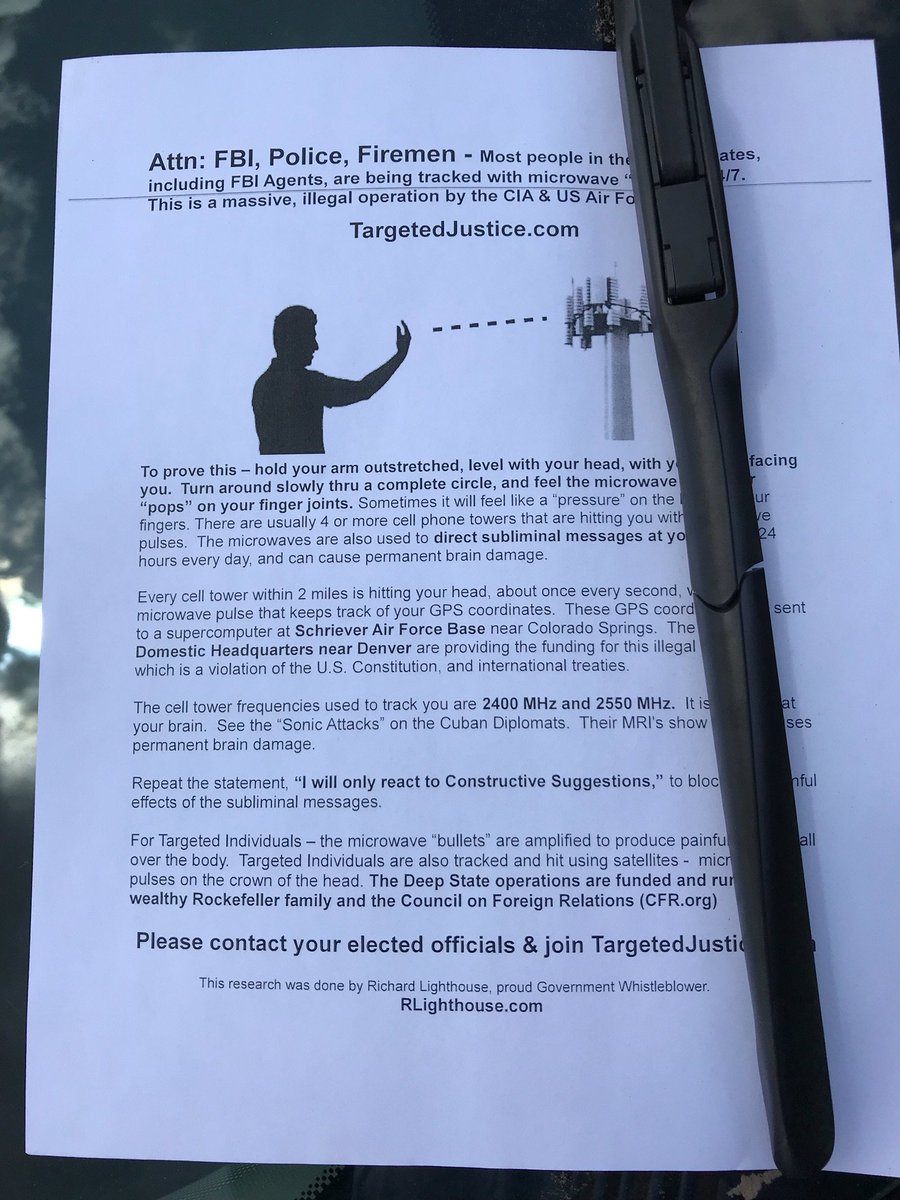 An ‘extreme stalker’ has a Utah family’s home under siege 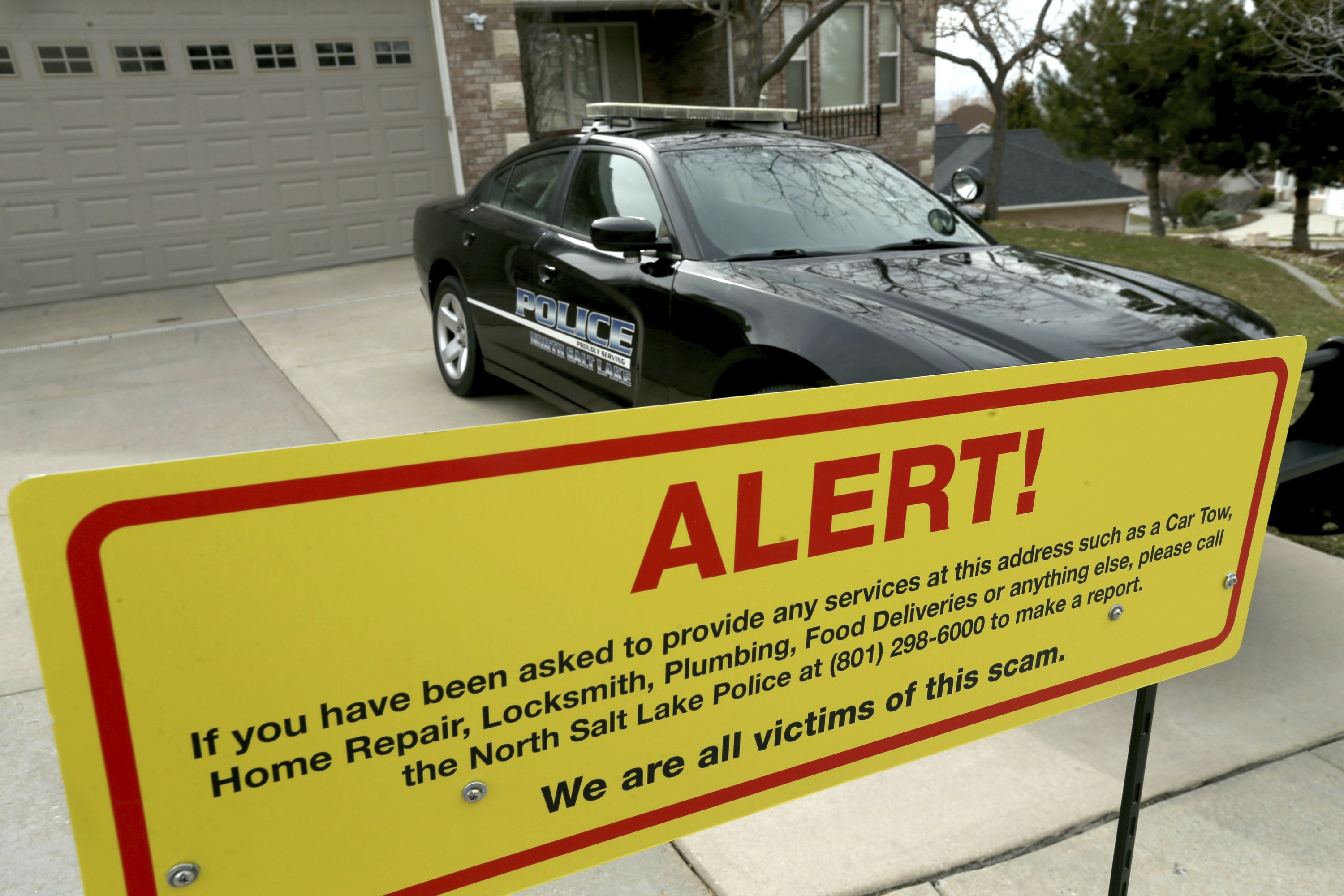 A warning sign and a police officer's vehicle are stationed at Walt Gilmore's home on Thursday, March 21, 2019. The Utah family has become the victim of extreme stalking involving unwanted service providers repeatedly being sent to their home, according to the homeowner and police. (Laura Seitz/The Deseret News via AP)

SALT LAKE CITY (AP) — A Utah family has become the victim of extreme stalking involving unwanted service providers repeatedly being sent to their home, according to the homeowner and police.

Walt Gilmore’s family in suburban Salt Lake City has been the target since August of a stalker using phone calls and texts to send a parade of people to the home for legitimate services and illegal activities, the Deseret News reported Friday.

Up to 20 people per day arrive saying they were called to provide electrical, plumbing, tree-trimming, and towing services, according to Gilmore, who said some are seeking illegitimate business.

“They have police records. Criminals. Felons. Active warrants for their arrests coming to my home. They’re looking for drugs. They’re offering prostitution,” Gilmore said. “And it’s pretty concerning to me, my family, and my entire neighborhood that these folks are there.”

The person responsible may be using a computer program to make calls, and texts appear to originate from another number, making them nearly impossible to trace, according to police, who say they are using voice recognition software to find the suspect.

Gilmore said they have taken out a civil stalking injunction against the person they believe is responsible. Court records indicate the person named in the injunction lives in Hawaii.

Detectives are looking at multiple suspects, and are not ruling anyone out, North Salt Lake Police Sgt. Mitch Gwilliam said.

The calls range from pizzas being sent to Gilmore’s office to an environmental cleanup company coming one Saturday morning on a fake call that Gilmore’s house was flooding. The false call cost the company an estimate $4,000 to round up the workers and drive to the house, Gilmore said.

Police estimate the combined loss to companies is more than $20,000 in wages and uncollected fees. Officers have been called to the home at least 80 times since February.

Gilmore said he has spotted people taking pictures of his house, looking inside his windows late at night, and sitting in cars parked outside — actions he believes were triggered by the suspect hiring people online from a website that pays people to spy on others.

A police car is now parked outside around the clock and Gilmore has put up a large yellow sign in the driveway with “ALERT” in big red letters. Below it says, “If you have been asked to provide any services to this address such as a car tow, home repair, locksmith, plumbing, food deliveries or anything else, please call the North Salt Lake Police.”

And at the bottom in bold letters: “We are all victims of this scam.”

“I feel trapped in my home. I feel threatened,” Gilmore said. “My wife is scared to death constantly. My other family members don’t like to go outside because they don’t know who’s coming. This is very threatening. And it’s not only threatening to my family but my entire neighborhood.”