Some very irresponsible people would maintain that was already done.

When you change a quote it's usually a good idea to point it out so people don't think I actually wrote that.

You just described a typical politician btw.
"I only read American. I want my fantasy pure." - Dave

What's supposed to be observed, I only see the cat still or moving?
Ben D

I can see Kitty more clearly by 'shaking’ my head… like walking ‘round the wild, wild woods, straining to see the source of a sound… shifting my eyes… stepping aside… re-setting my skull… re-searching again from another perspective, changing positions just be sure... to better discern through bushes and trees.

Once you’ve seen the kitty, of course, it’s the first thing you see when you search again. I have astigmatism which probably explains why I don't see much difference, everything appears a bit blurry anyway.

“Who are you ?” said the Caterpillar.
This was not an encouraging opening for a
conversation. Alice replied, rather shyly, “ I—I
hardly know, sir, just at present—at least I
know who I was when I got up this morning,
but I think I must have been changed several
times since then.”
“What do you mean by that ?” said the
Caterpillar sternly. “Explain yourself !”
“ I can’t explain myself, I’m afraid, sir,”
said Alice, “because I’m not myself, you see.”
“I don ’t see,” said the Caterpillar.
“ I’m afraid I can’t put it more clearly,”
Alice replied very politely, “for I can ’t understand it myself to begin with ; and being so
many different sizes in a day is very confusing.”
“It isn’t,” said the Caterpillar.
“Well, perhaps you haven’t found it so yet,”
said Alice; “but when you have to turn into a
chrysalis—you will some day, you know—and
then after that into a butterfly, I should think
you’ll feel it a little queer, won’t you?”
“Not a bit,” said the Caterpillar.
“Well, perhaps your feelings may be different,” said Alice; “all I know is, it would feel
very queer to me.”
“You!” said the Caterpillar contemptuously.
“Who are you ?”
Which brought them back again to the beginning of the conversation. Alice felt a little
irritated at the Caterpillar’s making such very
short remarks, and she drew herself up and
said, very gravely, “I think, you ought to tell
me who you are, first.”
“Why?” said the Caterpillar.
Here was another puzzling question ; and, as
Alice could not think of any good reason, and
as the Caterpillar seemed to be in a very unpleasant state of mind, she turned away.
“Come back !” the Caterpillar called after
her. “I’ve something important to say!”

Worrying about billboards in space being hacked or what they might be used to display is really quite funny. Directing so many resources toward so little (much like launching a car into space - of all things) is it's own message. Well, message received. Let's do things differently, beginning right here.
And while we spoke of many things, fools and kings
This he said to me
"The greatest thing
You'll ever learn
Is just to love
And be loved
In return"

The post about billboards in the sky is simply an analogy and part of the puzzle of programming people... which reminded me later of the original Bladerunner with Harrison Ford and Rutger Hauer…

Finally the two travelers reached what appeared to be the Pointless Forest. It was a huge thorny barrier with a small sign on a space which read, “This way”. Once on the other side of the barrier, Oblio and Arrow had their first encounter with the Pointless Man… or the Pointed Man, depending on your point of view. The Pointless Man did have a point. In fact, he had hundreds of them, all in different directions. As he so quickly pointed out, “A point in every direction is the same as no point at all.”

robin peering in the rearview mirror… 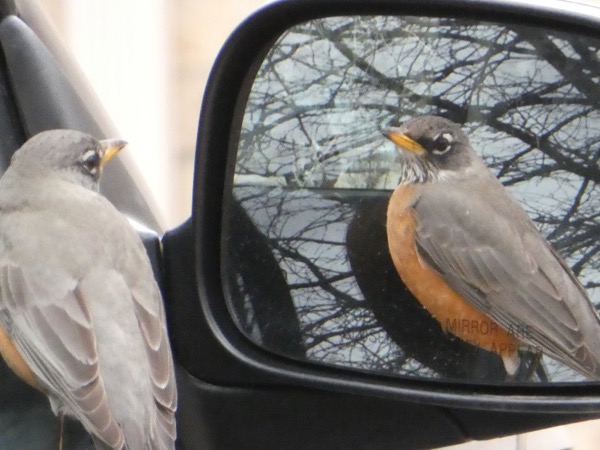