The RI thread about Alexandria Ocasio-Cortez

an ad where a woman invoked being Cambodian and then equated one of history’s most evil despots to AOC was just so........... vulgar?

Why on Earth Did an Ad Showing AOC’s Face Burning Air During the Debate?
Sarah Jones11:30 P.M.

Midway through Thursday night’s Democratic debate on ABC, the channel aired a startling ad from a Republican political action committee. The ad, purchased by the New Faces PAC, starts out with a with a still of Alexandria Ocasio-Cortez’s official congressional portrait — then sets it on fire:

The next scene shows a heap of skulls, and then cuts to Elizabeth Heng, a failed Republican candidate for California’s 16th congressional district. In ominous tones, Heng, the daughter of a Cambodian dissident, recalls the violence of the Khmer Rouge regime and warns against socialism in the U.S. The implication is clear: Ocasio-Cortez, a democratic socialist, represents a real and serious threat to the U.S., and if she and other leftists grow their power, mass murder is inevitable.

It’s a uniquely odious example of an old conservative habit. But that habit isn’t merely obnoxious — it puts the congresswoman at risk, too. Ocasio-Cortez, along with other members of her left-leaning congressional “squad,” already receives a high number of death threats; by allowing this PAC to air an ad that links her to genocidal violence in Cambodia, ABC grants undeserved legitimacy to ideas that make her a target.

Further complicating matters, the Freedom From Religion Foundation — a legal advocacy group that promotes separation of church and state — claims the channel rejected two of its proposed ads for the same night. And later in its broadcast, ABC aired an ad funded by NumbersUSA, an anti-immigration organization. Political Research Associations has reported that the group’s president, Roy Beck, once spoke to a white nationalist group and formerly edited The Social Contract, a journal that puts out what the Southern Poverty Law Center has called “race-baiting articles penned by white nationalists.”

On Twitter, Ocasio-Cortez has already responded, noting the irony of a Republican PAC doing outreach to minorities by smearing a woman of color:


Alexandria Ocasio-Cortez
✔
@AOC
Republicans are running TV ads setting pictures of me on fire to convince people they aren’t racist.


Alexandria Ocasio-Cortez
✔
@AOC
Know that this wasn’t an ad for young conservatives of color - that was the pretense.

What you just watched was a love letter to the GOP’s white supremacist case. https://twitter.com/aoc/status/1172322668038647814 …
Alexandria Ocasio-Cortez
✔
@AOC
Republicans are running TV ads setting pictures of me on fire to convince people they aren’t racist.

Others expressed shock at the ad, and ABC’s decision to run it:


Mehdi Hasan
✔
@mehdirhasan
Trump officials and GOP senators were asked to leave a few restaurants and we had a whole news cycle about a lack of 'civility' on the part of the left.


UltraViolet
✔
@UltraViolet
This ad is abhorrent. Literally burning @AOC and promoting violence against a sitting member of congress. How did you let this on the air @ABCNetwork? #DemDebate https://twitter.com/JordanUhl/status/11 ... 4469974017 …
jordan
✔
@JordanUhl
This is the very strange PAC ad featuring a burning pic of @AOC that aired during the #DemDebate:
Embedded video


Bend the Arc: Jewish Action
@jewishaction
This is the ad @ABC allowed to run during tonight's #DemDebate: right-wing propaganda depicting @AOC set on fire, burning into images of skeletons.

This is right out of the white nationalist playbook. No news network should be profiting off such hatred.
Embedded video


The PAC’s ad was ostensibly meant to counter the argument that the GOP is a racist political party. But they’ll need to do more than put Elizabeth Heng in front of camera to make that argument. If they’re truly concerned about the party’s image, they haven’t exactly done their cause any favors.
https://www.thecut.com/2019/09/aoc-repu ... bates.html

Who Is Elizabeth Heng, the Woman Behind the Strange Ad Comparing AOC to the Khmer Rouge?
Joshua KeatingSept 13, 201912:29 AM 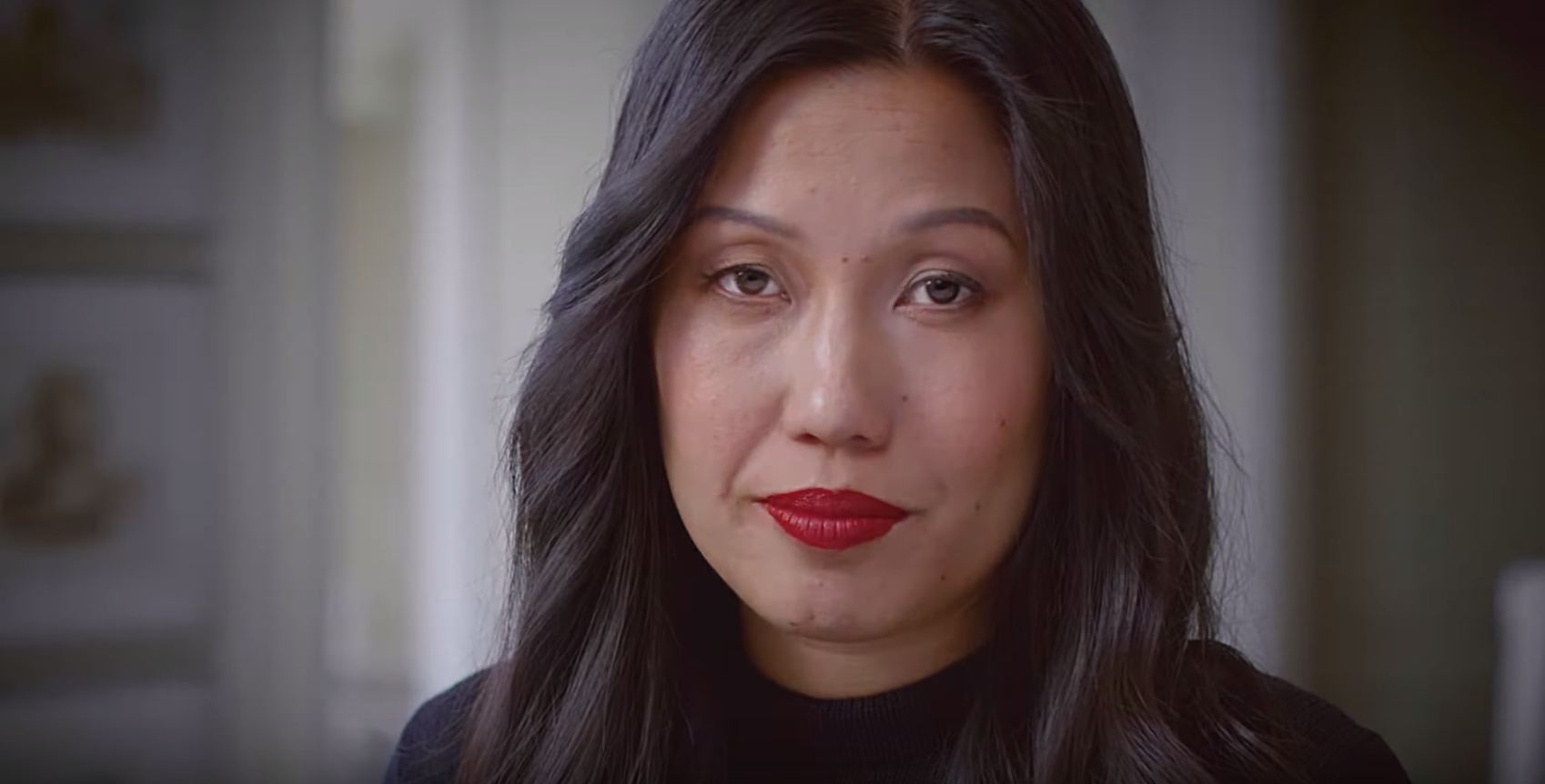 Elizabeth Heng.
Screenshot from Newfacespac.com
On the debate stage in Houston, Bernie Sanders frustratedly batted away any comparisons between his brand of “democratic socialism” and that of Venezuela’s Nicolás Maduro. But that was mild stuff compared with the red-baiting going on during the commercial breaks, when viewers were treated to a commercial in which Rep. Alexandria Ocasio-Cortez’s face goes up in flames, replaced by images of skulls from the Khmer Rouge genocide in Cambodia.

“This is the face of socialism and ignorance,” intones narrator Elizabeth Heng. “Does Alexandria Ocasio-Cortez know the horror of socialism? My father was minutes from death in Cambodia before a forced marriage saved his life. That’s socialism. Forced obedience. Starvation. Mine is a face of freedom. My skin is not white. I’m not outrageous, racist or socialist. I’m a Republican.”

The ad was produced by New Faces GOP, Heng’s new PAC, which was created in March and touts itself as trying to bring younger voters and people of color into the Republican Party. Who is Heng, you might ask? She’s a former staffer for Rep. Ed Royce, worked on Donald Trump’s inaugural committee, and ran unsuccessfully in the 2018 election against Democratic incumbent Jim Costa in California’s 16th Congressional district. As a young, minority woman, and the daughter of refugees, running as a Trump supporter, Heng attracted some national media attention during the midterms, with the Wall Street Journal even suggesting she could be “an Ocasio-Cortez for the GOP.” There was also some controversy when Facebook blocked one of her campaign ads, which told her parents’ story, because it featured graphic imagery of the Cambodian genocide.

In 2018, Heng ran as a relative moderate, focusing on issues like clean water, education, and supporting a legislative solution to give legal status to young immigrants covered under DACA.

But comparing AOC’s politics, which would be considered center left in many other Western countries, to a genocidal totalitarian regime that killed as many as 2 million people, is not moderate. It’s ludicrous and reprehensible. Perhaps Heng should ask the president she supports why he is so quick to defend the leader of an actual totalitarian, Communist regime.

The Daily Beast reports that “New Faces GOP appears to be purely a Heng-related venture,” with many of its funders and staffers carried over from her congressional campaign. After the ad aired, the GOP’s AOC carried on a brief feud with the original AOC on Twitter:


Alexandria Ocasio-Cortez
✔
@AOC
Know that this wasn’t an ad for young conservatives of color - that was the pretense.

What you just watched was a love letter to the GOP’s white supremacist case. https://twitter.com/aoc/status/1172322668038647814 …
Alexandria Ocasio-Cortez
✔
@AOC
Republicans are running TV ads setting pictures of me on fire to convince people they aren’t racist.

6,951 people are talking about this


Elizabeth Heng
✔
@ElizabethHeng
Not Republicans. Me. Are you really calling me a racist @aoc? I’m calling all Democrats out for supporting an evil ideology. Or are you just in Congress to hang out with celebrities and tweet out ridiculous ideas like the green new deal? https://twitter.com/aoc/status/1172323323641905165 …
Alexandria Ocasio-Cortez
✔
@AOC
Know that this wasn’t an ad for young conservatives of color - that was the pretense.

7,131 people are talking about this

If the goal of the ad was to get people talking about Elizabeth Heng, it was a rousing success.
https://slate.com/news-and-politics/201 ... oices.html

Montage of marching Nazis
Footage of unburied dead at Auschwitz

Voice Over:
President Trump saying
There were fine people on both sides
Repeat (more images)
Cut to:
Tiki Nazis in Charlotte chanting Jews will not replace us
Snip...."very fine people"
CUT TO:
CAR roaring through crowd backwards
Cut back to image of Trump
Black Screen
Blood colored letters appear:

It can happen here
" Morals is the butter for those who have no bread."
— B. Traven

It’s that moment when your obscure research subject pops up in the news. Yesterday @AOC was confronted by a woman claiming to be a climate activist at a town hall meeting. Her proposal to solve the climate crisis - “eat the babies”. 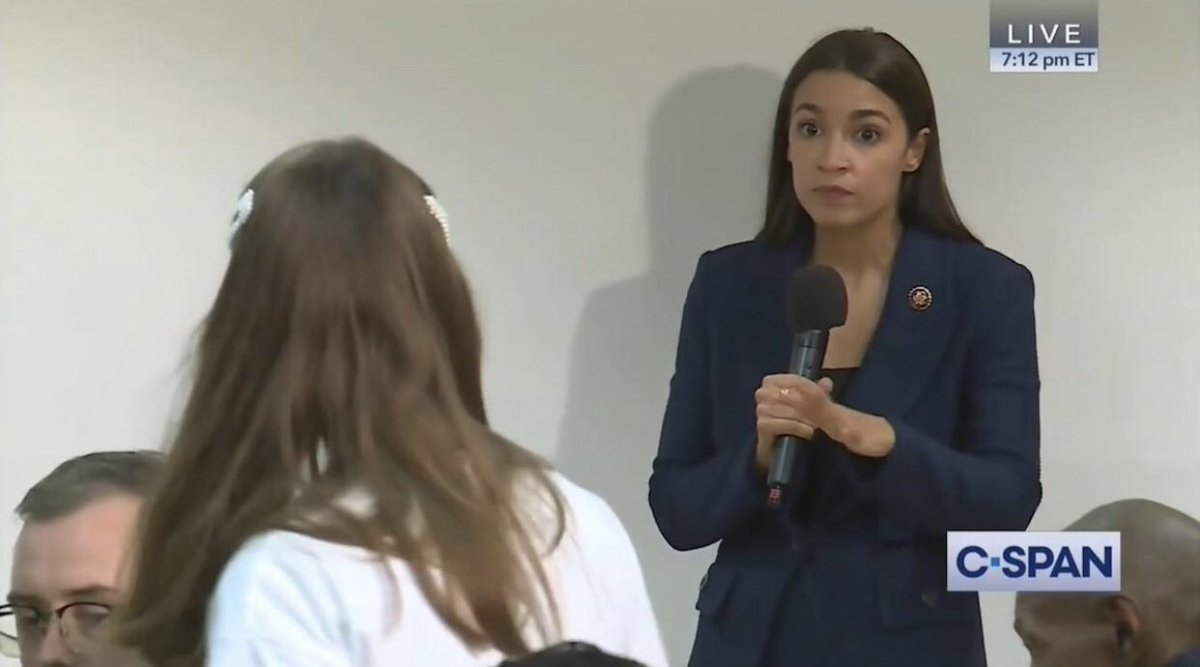 . @AOC did not denounce this woman. She thought that she was suffering from some kind of mental illness, and treated her kindly. But all kinds of figures on the right and the alt-right have pounced on the story. Including the President. 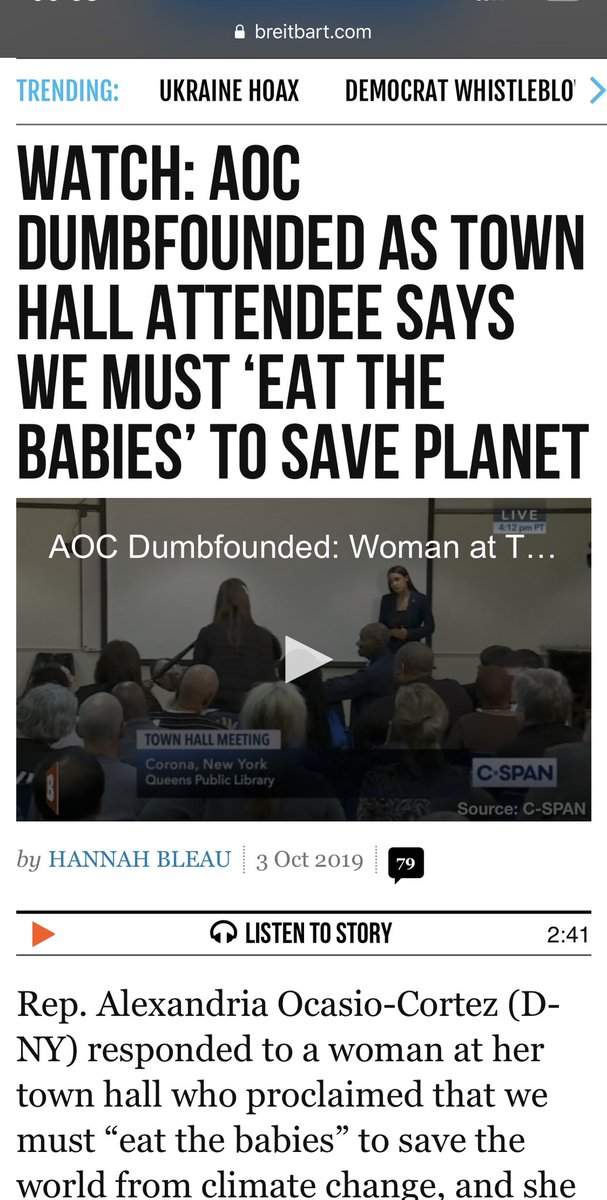 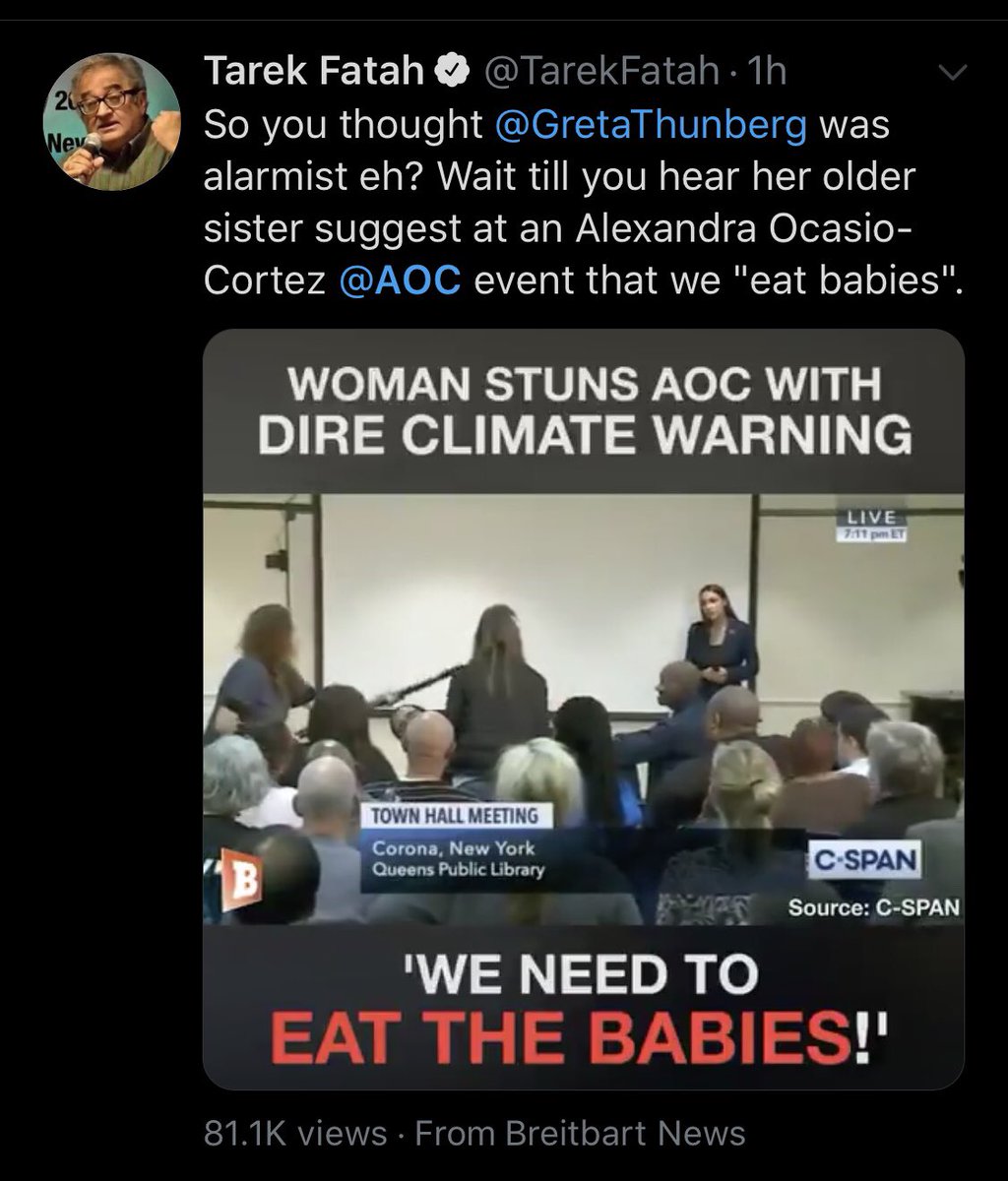 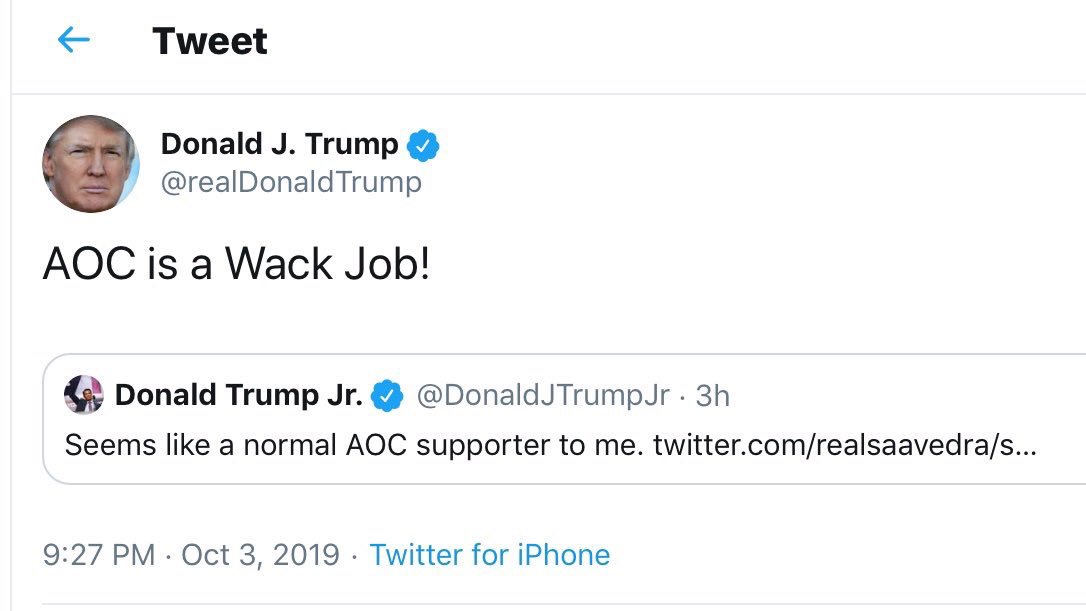 So who was this woman? Not a climate activist. Not even, perhaps, someone with a mental illness. She is a representative of the bizarre political cult once led by Lyndon LaRouche. Previous targets for this kind of stunt include @Janefonda Olof Palme & Michael Dukakis. Now @AOC. 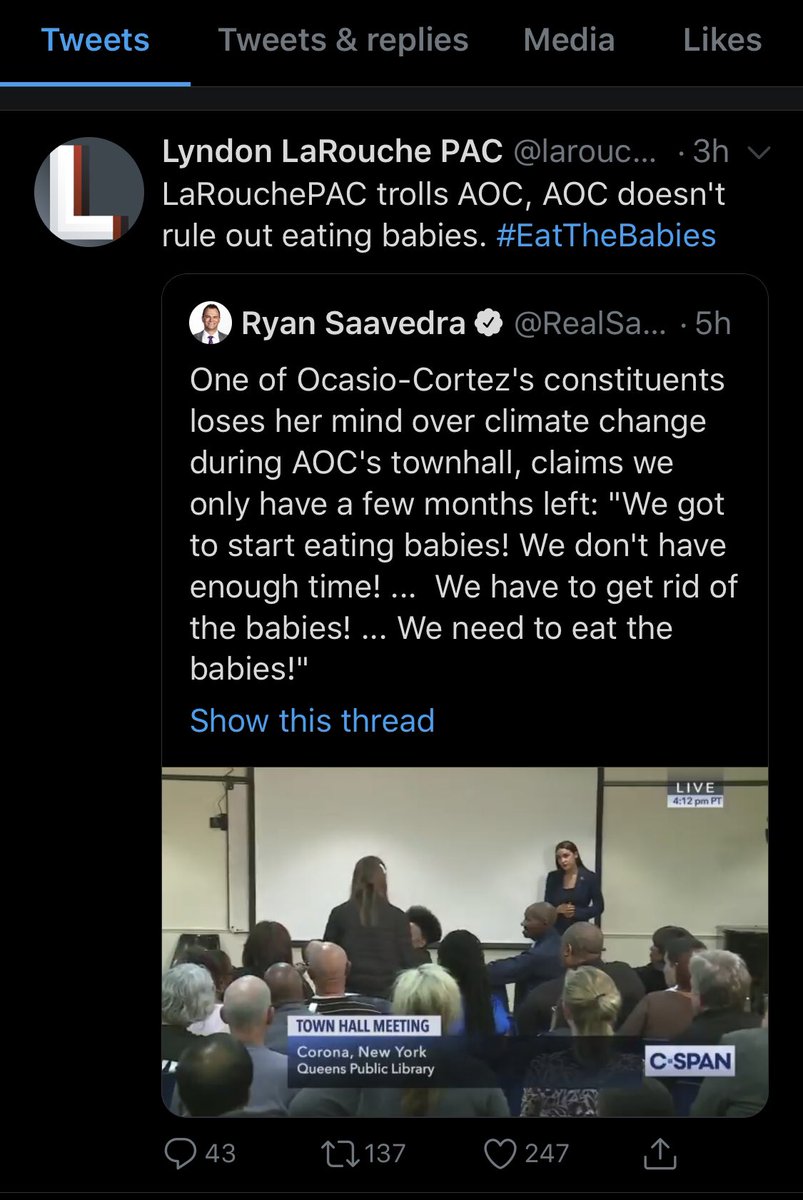 The LaRouchies are pretty exotic. They believe that the Queen controls the drugs trade. They think Prince Philip wants to start WW3. They think Bertrand Russell used the Beatles as part of a secret British psy war against the USA. They are, to use a technical term, nuts.

The LaRouchies have been enemies of the green movement for decades. They used to carry signs that read “Feed Jane Fonda to the whales”. It’s linked with their conspiracy theory about the Queen’s “green fascism”. Piers Corbyn, by the way, was a member of their Facebook group.

The LaRouche group was once a fairly ordinary revolutionary Marxist group. In the early days Bernie Sanders subscribed to their literature. Then came the great Brainwashing Affair of 1974, when members were convinced they had been programmed to kill by the CIA.

Commercial message - all this is in my book, Operation Chaos, told through the courageous testimony of those who survived this madness. (And some who still insist on the Queen’s super villain status.) @picadorbooks @HenryHolt https://www.amazon.co.uk/Operation-Chao ... 1627794638 … 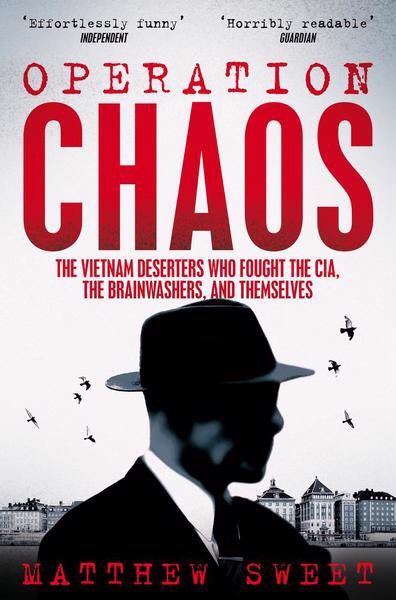 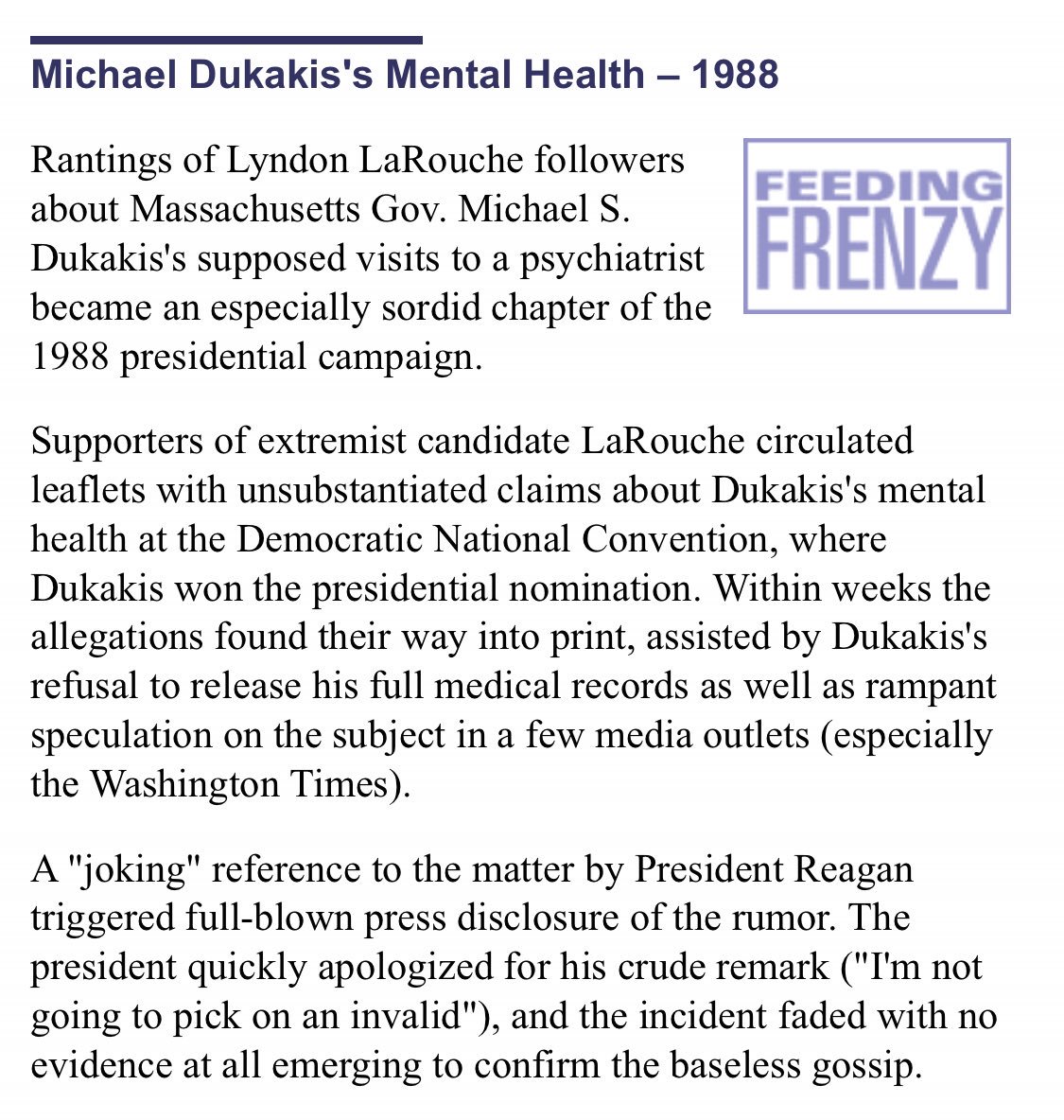 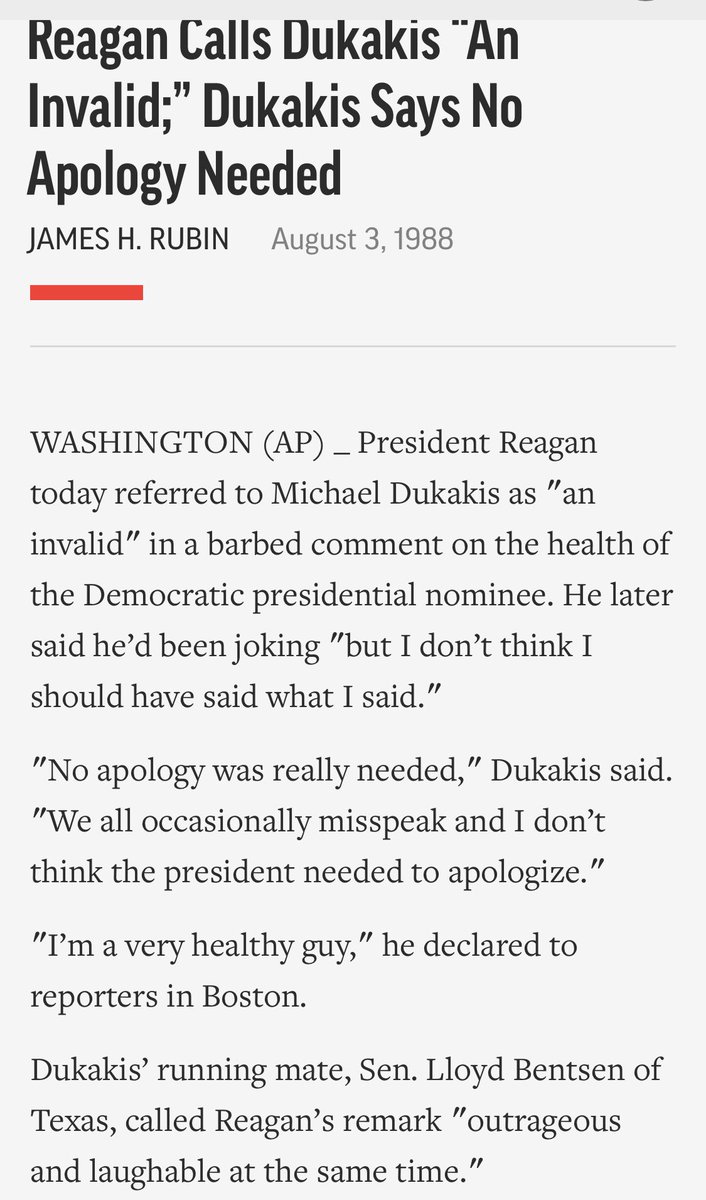 The LaRouchies are now firm Trump supporters - though Putin is their first love. 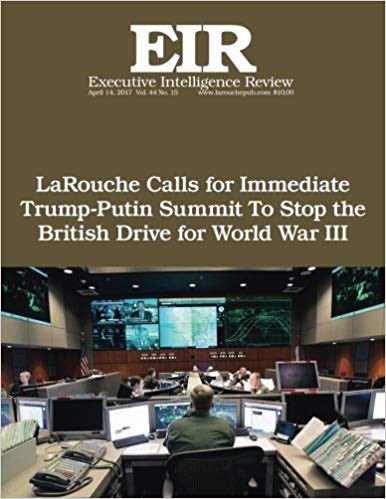 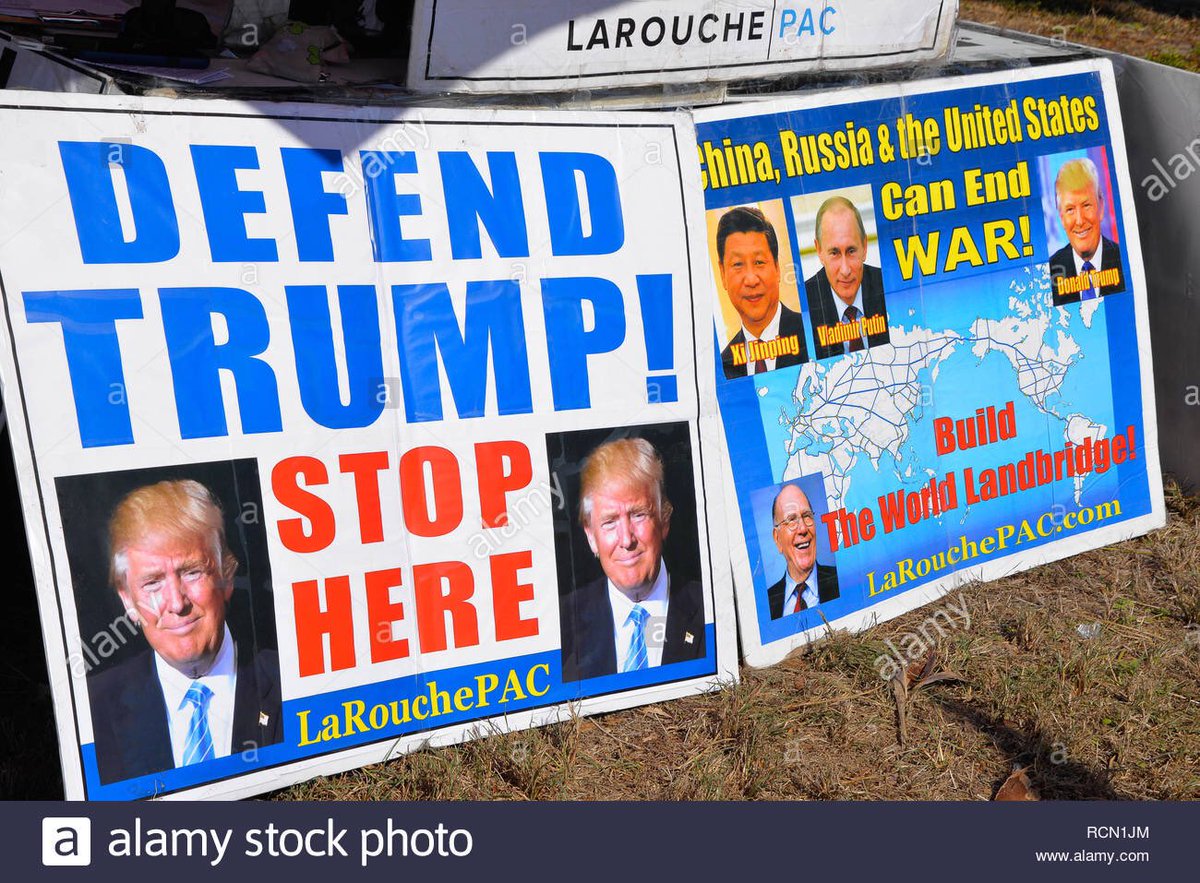 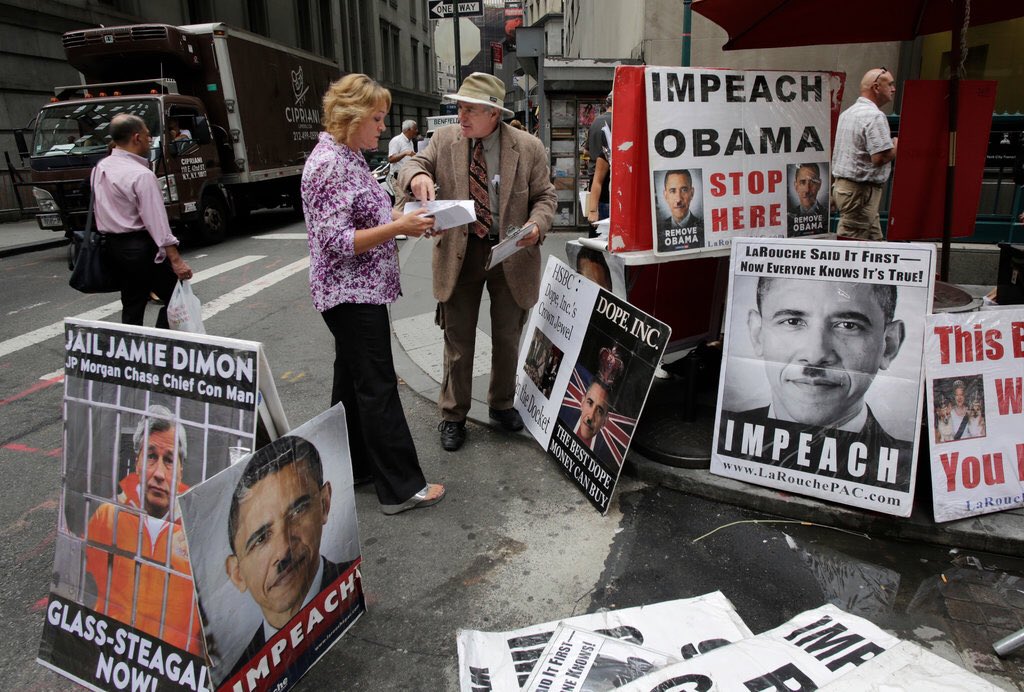 And here they are, making headlines again. And still crazy after all these years. 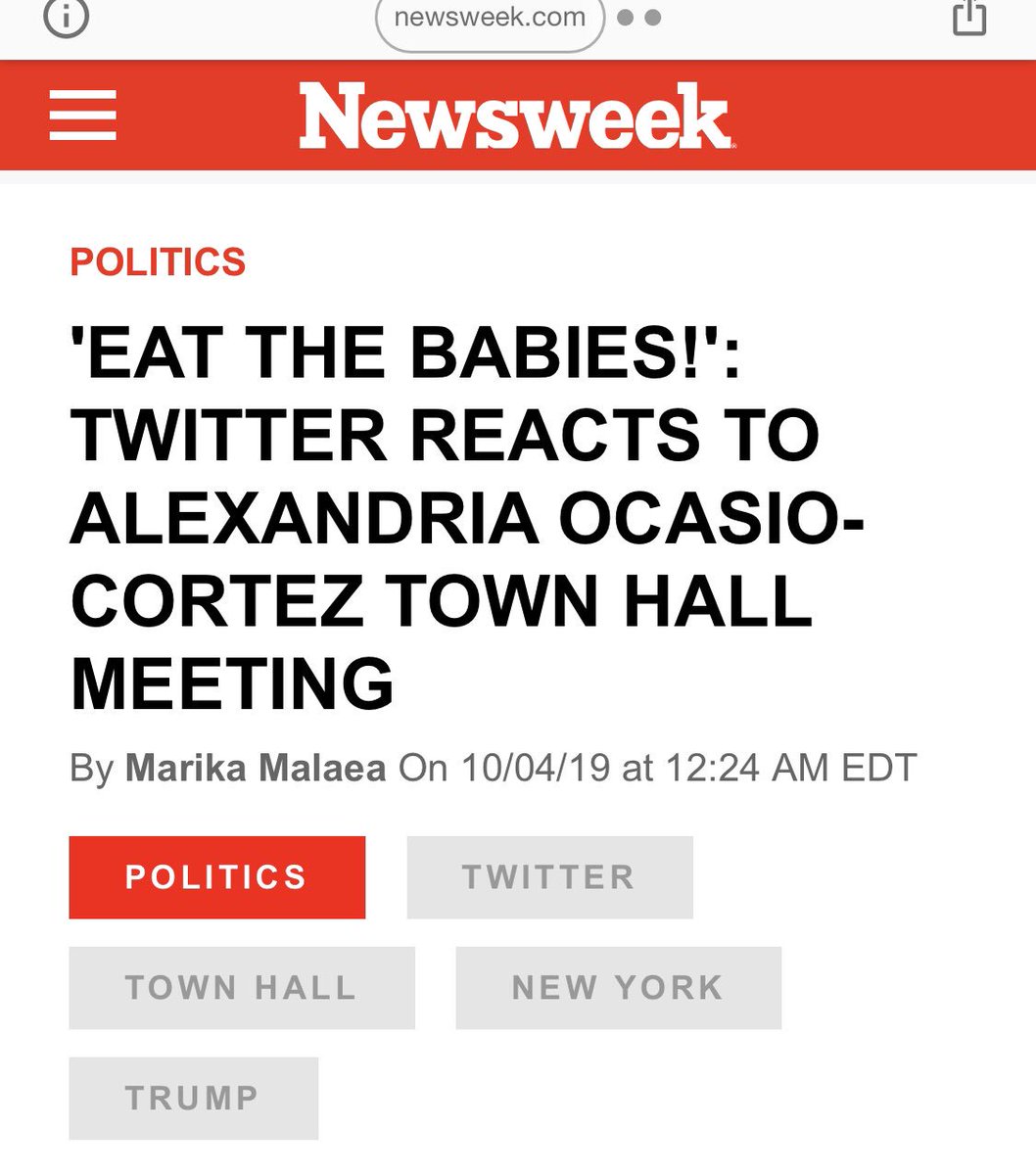 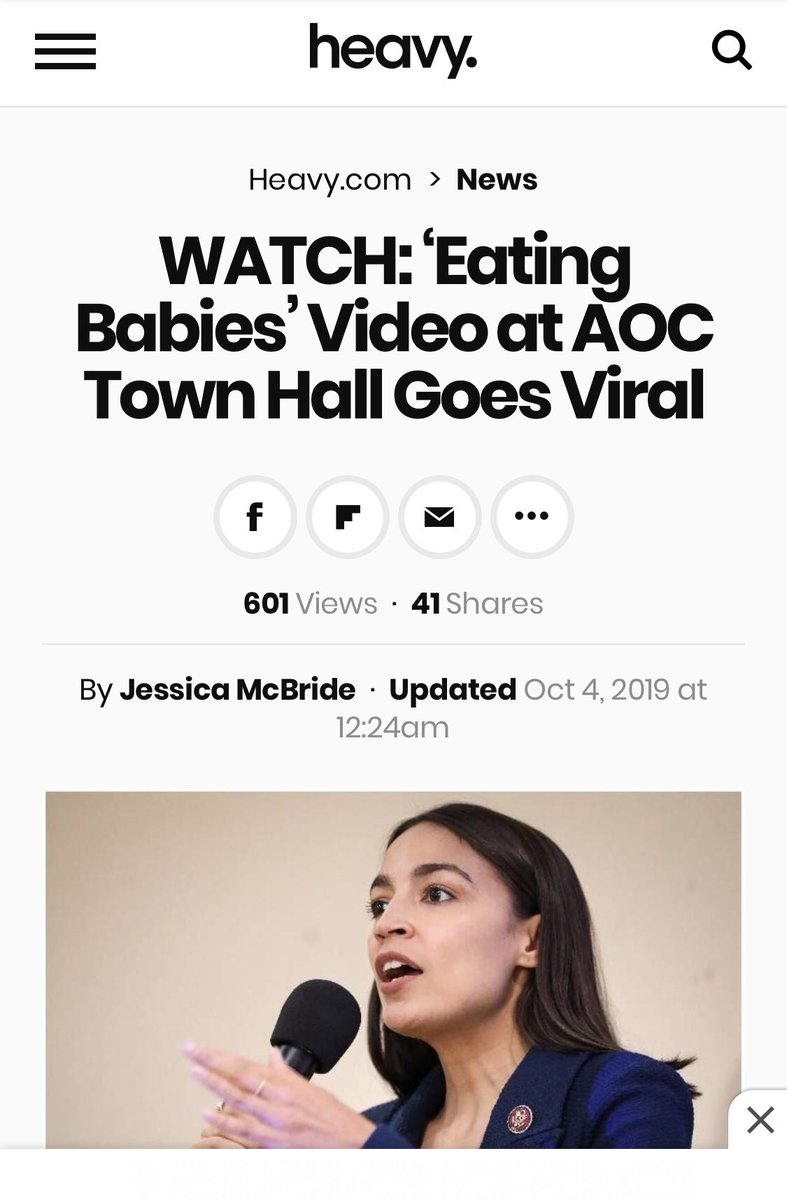 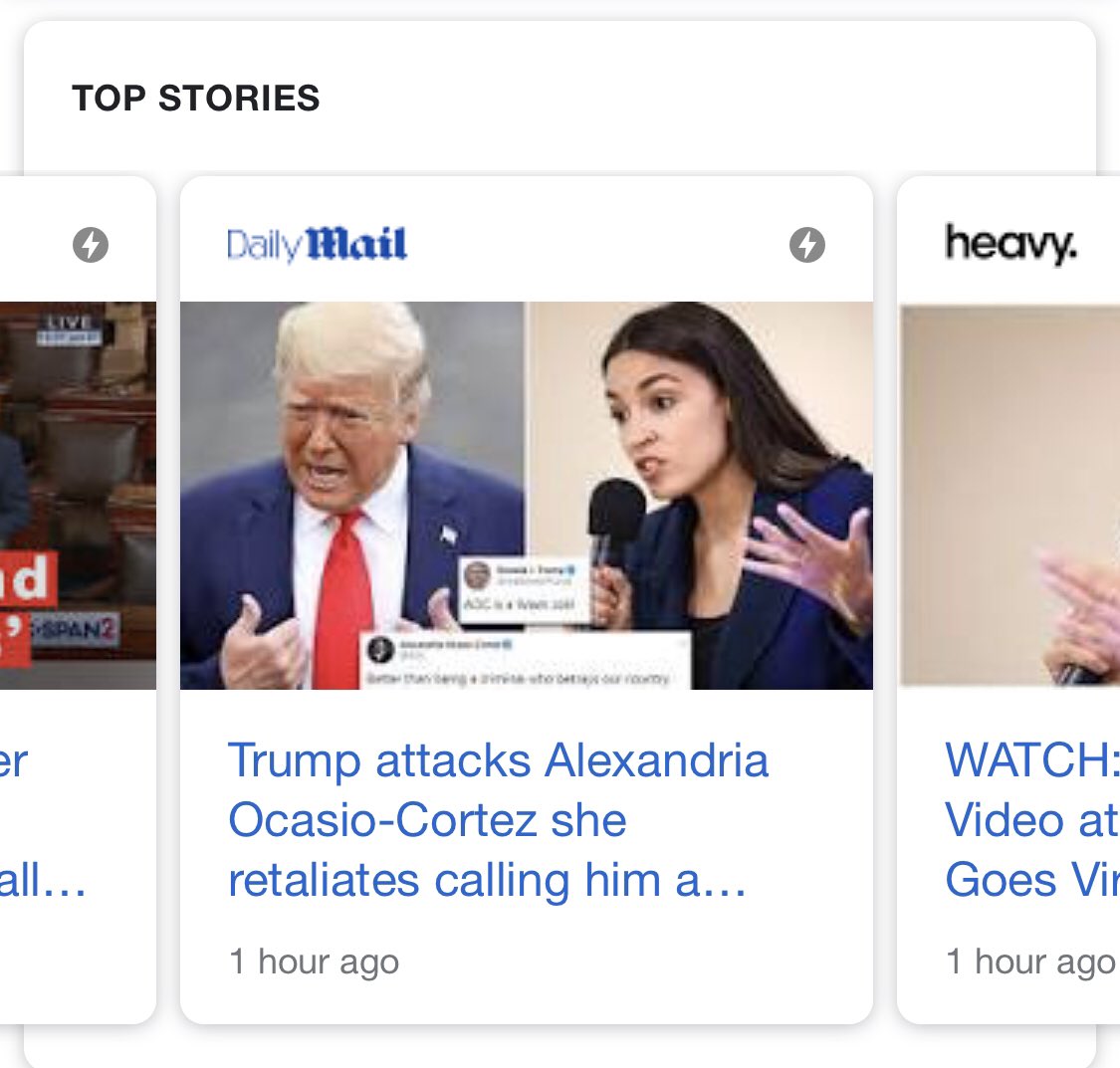 It also shows, I suppose, the residual intellectualism of their little movement - the whole stunt is a call back to Jonathan Swift's A Modest Proposal. Thomas Malthus - along with Bertrand Russell and the Queen - is one of their gallery of villains.
https://twitter.com/DrMatthewSweet/stat ... 2904020996